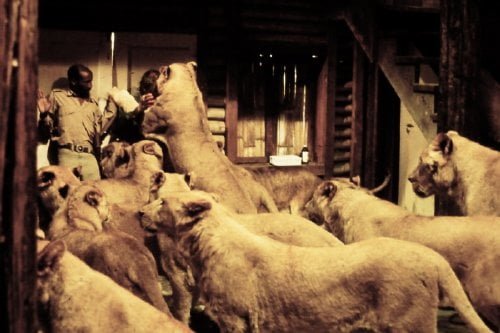 Hank (Noel Marshall) left his family in the US three years ago to head to Kenya to pursue his mission to save the big cats being mercilessly hunted by poachers. He is away from his sprawling compound when his wife, Madelaine (Tippi Hedren, daughter, Melanie (Melanie Griffith) and sons, John and Jerry (John and Jerry Marshall), arrive unexpectedly. They are not prepared for their greeting by the menagerie of very big felines in “Roar.”

Nucking futs and perhaps the most well intentioned exploitation film ever made.

Writer-director-actor-producer-production designer Noel Marshall spent 11-years putting his remarkable tome to film with a cast including scores of lions, tigers, leopards, cougars and jaguars. The filmmakers state at the beginning of “Roar” that none of the 150 big cats were injured during the making of “Roar.” but 70 humans were - a broken leg and bite wounds (Tippi Hedren), facial reconstruction (Melanie Griffith) and gangrene and puncture wounds (Noel Marshall), scalp lacerations (cinematographer Jan de Bont in his Hollywood debut) and many more. This makes the film the possibly most dangerous Hollywood movie ever made. The story that Noel Marshall hangs his film on is a slight as could be. Hank’s long estranged family make a surprise visit and have no clue just what he does with big cats. Then, the slapstick begins as the family flees in terror from the swarm of felines that chase them from room to room and up and down stairs. They do not know that the cats are just playing. That is about it for story. The reason to take the time to see “Roar” is because of the 70 people injured during its making. I do not mean this in a morbid way, though, as the film is an amazing achievement in its making. There have been many wildlife films made, especially about lions, for many years. “Born Free (1966),” “Living Free (1972),”Napoleon and Samantha (1972)” and “Clarence the Cross-Eyed Lion (!965)” may have preceded “Roar (1981)” and “To Walk with Lions (1999) and “The Ghost and the Darkness (1996)” came after but none has the sheer visceral excitement of Marshall’s work. As you watch “Roar,” you will notice that there is quite a bit of blood. The sobering thing about that is it is real blood shed by the members of the human cast and crew while making the film. The big cats may be semi-trained – most were collected from zoos, circuses, pet stores and private owners – but we are still talking BIG CATS. If a 200 pound lion playfully swats at you, there is going to be damage, so watching “Roar” often brings a knot to the stomach by way of appreciation of what the filmmakers accomplished here. Unfortunately for Noel Marshall, the 11-year production was wrought with disasters, including a flood that washed away the sets, equipment and film already shot to the tune of over $4 million, Three lions, including the film’s lion king Robbie, had to be destroyed. He completed his heart-felt work but it rang the death knell for his career as a filmmaker. After seeing “Roar,” at least he had the satisfaction of going out with a bang with a film that should be seen by old and young alike.