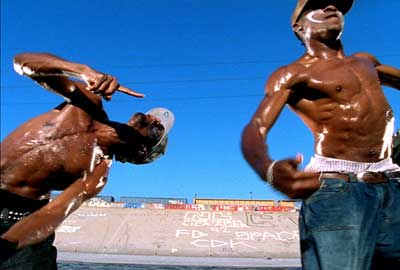 Tommy Johnson was headed down the road to prison and, possibly, death at about the time of the infamous Rodney King beating. Tommy’s brush with the law and the potential for his own demise proved to be the tonic he needed to break free from his spiral down. From the ashes of his old life rise his new persona – Tommy the Clown - a combination of Emmett Kelly and Gene Kelly who takes humor and dance into the ‘hood to make a change in “Rize.”

Documaker David LaChappelle starts off his inner city dance docu with the King fiasco and the riots it spawned. But he also shows that a different influence, besides violence, could rise out of that terrible event – dance. The kids of the ghettos show their feelings about that event not with guns and fire but with movement and grace as they reenact the beating in a constructive, rather than destructive, way. Johnson was one of those who rose above the hate of the day and emerged as Tommy the hip-hop dancing clown. Tommy made the tough decision in his life to eschew the future as a Blood or a Crip in favor of a lifestyle that brings happiness and pleasure for many. He is the inventor of “clowning,” where he combines clown makeup and costume with dance, and fostered a movement that foregoes gang violence in favor of the personal expression of his energetic dancing style. The cathartic quality of Tommy’s moves influence the youth of South Central, Watts, Compton and Englewood as they adopt clowning as part of their own lives. Their love of dancing pushes aside the hate and anger that pervades their neighborhoods. But, “Rize” is not just about clowning. That dance style was also the springboard for “krumping,” another dance style that exudes near impossible levels of energy from its participants. Rather than gangs with guns going against each other, Tommy and his clowning and krumping followers use their different dance medium as a new form of gang action, but one where the players do not maim each other. We see the proponents of clowning and krumping as they practice their craft, influenced by the tribal dances from Africa – the filmmakers juxtapose the kids doing their thing with archival footage of African tribes. The similarities between the East LA dancers and their African forebears, though developed in entirely different environments, are striking. Rize” culminates in a dance competition, called Battlezone, held at the LA Forum, which pits the best of the Clowns and the Krumps at what they do so energetically. Their dance is not something that appeals to a middle aged white guy like me but the sheer athletic ability and dedication of these kids does. The positive messages put forth by LaChappelle and company makes “Rize” the kind of film that youngsters, especially teens, should be encouraged to go see. The violence of the inner city is not whitewashed or overlooked by the documakers, but the benevolent power of dance shows that these kids have a choice with their lives. I got very tired watching “Rize” because of the hyper movement of the participants but that does nothing to diminish the positive role that dance has on these kids. It’s a bit overlong with a coda that should have been trimmed but, still, one has to appreciate the positive influence that gives these kids a chance to break free of inner city violence.