Rise of the Planet of the Apes 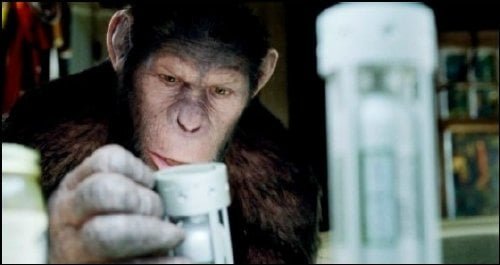 Gen-Sys scientist Will Rodman (James Franco) is conducting experiments to repair damaged human brain tissue in hopes of finding a cure for Alzheimer's, the disease ravaging his father, Charles (John Lithgow). When his project is suddenly shut down after his chimpanzees exhibit strangely aggressive behavior, Will finds himself left with the infant offspring of a test subject. Caesar (Andy Serkis, "The Lord of the Ring's" Gollum) will grow up to become the primate who inspires the "Rise of the Planet of the Apes."

Almost forty years since "Battle for the Planet of the Apes," the 5th of the original series, and ten years after Tim Burton's less-than-successful "Planet of the Apes" remake, little known director Rupert Wyatt ("The Escapist") working with a script by Rick Jaffa & Amanda Silver ("The Hand That Rocks the Cradle," "An Eye for an Eye") breaths exciting new life into the franchise with a prequel which explains how Darwin's theory got flipped on its head. Special effects have come a long way in intervening years, and, while not entirely perfect, Andy Serkis's performance capture of Caesar, the other very individualized chimps, a bottled up gorilla named Buck (Richard Ridings) and Maurice (Karin Konoval), a former circus orangutan, will have you believing. And if you've seen "Project Nim" (and even if you haven't) you'll be rooting for the apes. The film opens with a spectacular overhead shot of a verdant valley, breathtaking and in 2D. Chimpanzees are traveling in a pack when suddenly men with machetes start rushing them and trapping nets begin springing. The sequence is sudden and shocking and we feel the pain of a family being ripped apart. At least one of these animals, Bright Eyes (Terry Notary), becomes #9, Will's most promising test subject, but just as he's pitching ALZ112 in a conference room, all hell breaks loose when Bright Eyes goes on a rampage. Gen-Sys CEO Steven Jacobs (David Oyelowo, "The Last King of Scotland") orders the project shut down and the apes destroyed, much to handler Robert Franklin's (Tyler Labine, TV's 'Mad Love') extreme dismay, especially after he finds the real cause of Bright Eyes' distress - the newborn she'd hidden in her cage. Caesar turns out to be a boon for the Rodmans, learning sign language, outperforming human children in intellectual development and aiding Will in his now secret research. Will uses his own father as a test subject and not only cures him, but improves the functioning of his brain. Then one day Charles begins to fail again. Will moves onto ALZ113. But Caesar isn't content to stay inside and his increasing intelligence makes him question his place, obviously angered when he makes the connection of his own leash with that of another family's dog's. Then Charles begins to backslide and an altercation with next-door neighbor Hunsiker (David Hewlett, "Splice") brings the now eight-year old Caesar out in protective mode. Will is forced to turn him in to a primate shelter where a sadistic handler (Tom Felton, "Harry Potter's" Draco Malfoy) inflames the chimp further. When Will visits and fails to remove him, Caesar's loyalty turns toward his fellow apes. "Rise of the Planet of the Apes" is so good, one wishes it could have been just a little better. There are some script issues, most prominently the flip-flopping politics at Gen-Sys and the effects of ALZ113 on humankind, the explanation of which is a weak fob off. There's also the matter of Will's ability to communicate with Caesar using complex verbal language when signing had been his teaching method. On the plus side, the filmmakers have worked in subtle humor in the form of Hunsiker's amazing ability to be in the wrong place at the wrong time and small winks at the original "Planet." Caesar's complex moral code is also well done as are the metaphors for subjugation of the human race by its own. The film's climatic apes against man battle is a beautiful bit of staged warfare strategy and Wyatt has a knack for city-wide action and expert pacing. Locations in San Francisco, its neighboring redwood forest and Hawaii have been given a sweeping grandeur. Despite Oscar-nominated Renaissance man Franco in the lead, the film is unlikely to garner any acting awards. Even Serkis, while good (you'll believe apes can speak!), is often called upon to rely upon repetitive stances. "Slumdog MIllionaire's" Freida Pinto does little to distinguish Caroline, the zoo vet who becomes Will's romantic interest and Franco himself isn't as tortured as he should be over the fate of the apes in his project. Felton was ill-advised to choose another role as a sneering bully. Much more distinctive is the CGI that has been used to differentiate Caesar from Rocket, the chimp who tries to dominate in the shelter; Koba, the experimental lab veteran drafted into service for ALZ113; Buck, the gorilla kept caged within the shelter and Maurice, the first ape to communicate with Caesar. The apes are the stars here. Every technical element of the production has been beautifully designed from the art direction of the Rodman household, Gen-Sys and the shelter to Andrew Lesnie's ("The Lord of the Rings" series) fluid cinematography and Patrick Doyle's ("Thor") propulsive score. The FX team at Weta Digital not only turn actors into apes, but make those apes charge through their native habitat, gallop across city tree tops and swarm over the Golden Gate Bridge. Wyatt's put himself solidly on the map with this prequel so successfully he leaves us wanting more. "The Planet of the Apes" has indeed risen.