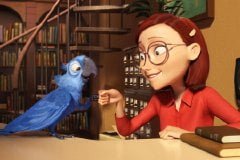 A baby blue macaw is scooped from its habitat and smuggled out of Brazil to be sold in a U.S. pet store, but his crate falls out of a truck into a snowbank. The shivering bird is rescued by a little girl. Fifteen years later Linda (voice of Leslie Mann, "Knocked Up") and Blu (voice of Jesse Eisenberg, "The Social Network) are the best of buddies when they receive a visit from Tulio (voice of Rodrigo Santoro, "I Love You Phillip Morris"), a Brazilian ornithologist, informing them that Blu is the last male of his species and there is a female waiting for him back in "Rio."

Blue Sky Animation has taken a page from Dreamworks' Madagascar franchise and upped the ante. This a fish-out-of-water travelogue tale is charming, colorful and perfectly voice cast. One wonders what Jesse Eisenberg thinks about his current status as the go-to nerd, but he's delightful giving distinctive voice to a flightless pet parrot who uses his brain and beak to compensate. Eisenberg is so entertaining in this film, he even eclipses his costar, the usually irrepressible Anne Hathaway as Jewel, his potential mate. Jermaine Clement gives great villainous personality to Nathan, an ugly cockatoo and former Telenova-like star whose theme song could have come from his 'Flight of the Conchords' cannon (and is the first on 2011's list for Best Song consideration). If the film has a downside, it's that Linda, despite Mann's Minnesotan cadences, is rather bland, and her parallel conflicted romance with Tulio doesn't have the same routing interest as Blue and Jewel's. After establishing Blue and Linda's daily happy routine in the American midwest (she owns a book store), the nerdy homebodies are whisked off to Rio and Tulio's lab. Blue is thrown into Jewel's controlled environment and the two have nothing in common. She sneers at his status as a pet ('I'm not a pet! I'm a companion.') and his inability to fly and works on widening the bars of a vent to attain her freedom. But after Tulio convinces Linda it's perfectly safe to leave Blu in his lab under guard for the evening, a young thief from the favelas, Fernando (voice of Jake T. Austin, "The Perfect Game"), sneaks in and nabs the birds for Marcel (voice of Carlos Ponce, "Couples Retreat"), an exotic bird smuggler who has a nice price set for the rarities. This sets the stage for lots of adventures and new characters as Blu uses his noggin to escape and then attempts to find Linda as Rio ramps up for its citywide Carnaval. Blu and Jewel will meet canary Nico (voice of Jamie Foxx) and fat cardinal Pedro (voice of will.i.am), a couple of partying birds who like to sing samba-infused hip hop. But Blu and Jewel had been chained together and, with Nigel and his paid tribe of marmosets on their tails, helpful toucan Rafael (voice of George Lopez) guides them to Luiz (voice of '30 Rock's' Tracy Morgan), a bulldog in a body shop he thinks can help them. Luiz does help them, in a most slobbery way (the dog's drool proved one of the animators' greatest challenges), and once the two birds are no longer connected, Blu's flightlessness separates them even further. Director Carlos Saldanha (the "Ice Age" series), who is from Rio, came up with the idea to set an animation in the city he loves and screenwriter Don Rhymer ("Surf's Up") has worked Rio's touchstones into the plot organically. A fabulous hang gliding sequence from Sugar Loaf Mountain includes a circle around the famous Christ the Redeemer statue on Corcovado, Rafael's wife screeches bars of 'The Girl from Ipanema' and the film's big climax takes place in the Sambadome filled with Carnaval floats and performers. The animators use a spectacular color pallet and their rendering of the animals is amazingly lifelike. Blue Sky created new feather-renderer called a Ruffle Deformer to individually animate feathers and control wing movements, but their first time out rendering humans is a bit flat and those marmosets are awfully reminiscent of "Madagascar's" lemurs and "The Powerpuff Girls Movie's" Jojo. Besides Clement's funny "Pretty Bird” theme, musical director Sergio Mendes scoped out a lively Latin fusion sound for the film, including a new recording of his classic bossa nova hit with Brasil ’66, “Mas Que Nada.” The filmmakers not only imbue "Rio" with a story about finding yourself to literally and figuratively fly, but a responsible and worthy message about exotic animal smuggling. "Rio" is in 3D, which does enhance the flying sequences, but its bright visuals and sound and its terrific vocal performances will make it a joy in any format.