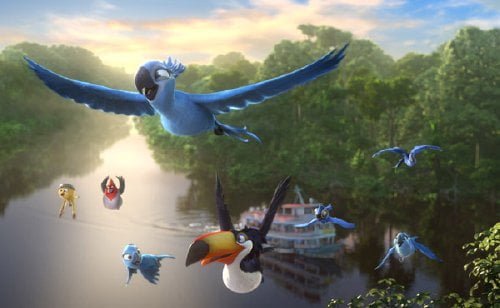 On their honeymoon trip in the Amazon, Linda (voice of Leslie Mann) and Tulio (voice of Rodrigo Santoro) find evidence that Blu (voice of Jesse Eisenberg), Jewel (voice of Anne Hathaway) and their three hatchlings aren't the last of the Blue Macaws. Back in Rio, Jewel learns the news on a TV report and decides the family should take a trip back to the wild to find their own kind in "Rio 2."

Cowriter (with Don Rhymer, "Rio")/director Carlos Saldanha ("Ice Age," "Rio") sambas his way easily around franchise slump by taking his newly transplanted Minnesota Macaw out of the city and into the jungle. Armed with his fanny pack and GPS, Blu will face his nemesis Nigel (voice of Jemaine Clement), illegal loggers, a rival tribe, the myriad perils of the jungle and, gulp, his father-in-law (voice of Andy Garcia). "Rio" was full of the music of Carnaval and its sequel opens to Janelle Monáe's 'What Is Love' on New Year's Eve (the film is as much a musical as Disney's "Frozen"). But the evening's cut short for Blu and Jewel when they see their baby sitter, Toucan Rafael (voice of George Lopez), partying with his wife - he says he's left the kids with bulldog Luiz (voice of Tracy Morgan), but he's there too! The worried parents arrive at home just in time to stop Tiny from getting blasted into the stratosphere on a firework by their kids Carla (voice of Rachel Crow), Tiago (voice of Pierce Gagnon) and Bia (voice of Amandla Stenberg), but Blu's heroics land him in the danger zone. That's what's so lovable about the timid Blu - he'd like to think of himself as 'the Bird,' but he's fond of the human comforts and modern conveniences he grew up with. Jewel, on the other hand, thinks their kids should be breakfasting on Brazil nuts instead of pancakes. And so, Blu reluctantly sets off on a vacation (pop up maps of Brazil provide a travelogue as Blu's malfunctioning GPS takes them zigzagging across the country) while his wife is actually going home. Meanwhile, cockatoo Nigel, now flightless, is an enslaved street performer, but when he spies Blu, he makes an escape with the aid of Charlie the anteater and besotted poisonous frog Gabi (voice of Kristin Chenoweth). He'll only be welcomed by Pedro (voice of Will i Am) and Nico (voice of Jamie Foxx), looking for new Carnaval talent in the Amazon (and providing the movie's midsection with a lot of fun). After promising auditions (a hilarious montage) end badly, Nigel brings down the house with his 'I Will Survive'/music from "Rocky" medley. (The film's knockout number goes to Chenoweth, whose no-holds-barred 'Poisonous Love' is a winner. Animation is a riot of color, Jewel's tribe in contention with Red Macaws for the Brazil nut grove both call their home (a soccer game between the two gives Blu his shot at glory, but it all ends badly). Gabi is a pink and purple tree frog with aqua eyeballs. Charlie doesn't say much, but his tongue is almost his sidekick. Other new characters include a rapping sloth (voiced by Karmin's Amy Heidemann), Capoeira turtles, Amazon quail, snakes and spiders. In addition to Garcia, new vocal talent includes Rita Moreno as Jewel's enthusiastic Aunt Mimi, Bruno Mars as her childhood sweetheart Roberto and Miguel Ferrerr as the villainous logging boss. "Rio 2" has plenty of lessons for the kids hidden within the adventure, but adults will be entertained too. It's Eva's (voice of Bebel Gilberto) Rio shrieking that drive the party planners to the Amazon, but as her husband Rafael likes to say, “a happy wife means a happy life!,” words Blu learns he's happy to live by.