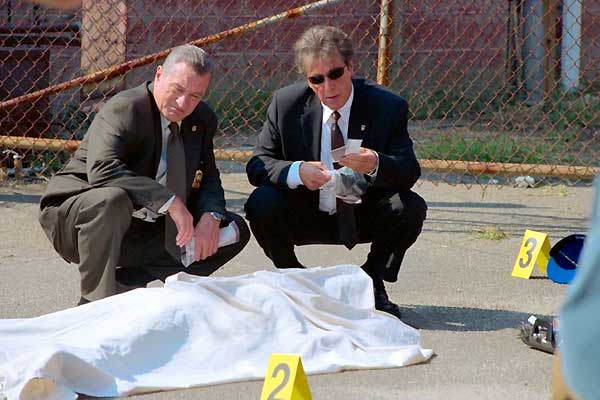 There is a serial killer on the loose in New York City. But, not your 'normal' serial killer. This one has donned the mantle of vigilantism and is taking out, one by one, the criminal scum of the earth that have evaded justice. Veteran detectives David 'Turk' Fisk (Robert DeNiro) and Thomas 'Rooster' Cowan (Al Pacino) take the case only to figure out that a cop may be the vigilante murderer in "Righteous Kill."

Lazy, muddled and so misdirected it should be a felony itself, "Righteous Kill" is nothing but a cheap trick.

In 1995, director Michael Mann brought together, for the first time, two of America's most iconic actors ­ DeNiro and Pacino. The world has been waiting, expectantly, for the pair to be united again. I would like to say that the wait was worth it but, after wasting 100 minutes of my life, I can state that, no, it was not. Director Jon Avnet, working a script by Russell Gewirtz, brings us a flat, manipulative story that uses deception to, so it seems, keep the audience on its toes and guessing. What we really get is muddled film that is populated by two-dimensional characters and a plot that did anything but keep-me-guessing. As the criminal body count mounts, Turk and Rooster are joined by younger detectives Perez (John Leguizamo) and Riley (Donnie Wahlberg) who raise the idea that the killer may be one of their own. Turk protests too much about the theory and, of course, is a prime suspect. The cat and mouse chase to find the real killer twists and turns but the finger remains firmly pointed at Turk. Unfortunately, I guessed the outcome early on ­ and proved correct ­ so I spent my wasted time giving the film a critical look. Neither star shines, nor do the supporting players, as Avnet attempts to lead us by the nose with the not-so-clever plot that splinters in several directions. We have the cops trying to find the vigilante before he can kill again (they are unsuccessful, of course). Then there is Spider (Curtis Jackson) a club owning drug dealer that Fisk and Cowan are bound and determined to bust. Carla Gugino plays Karen Corelli, a forensics cop who likes rough sex, is bedding Turk and digs up dirt on the case. Brian Dennehy is wasted as the boss lieutenant whose sole job is to tell his men to find the killer. Fast. Techs are unmemorable in a cop film that has more to do with the psychological profiles of Turk and Rooster. The former is sullen, quick tempered and prone to doing what needs to be done, even planting evidence, to bring down criminals. The latter is well adjusted, gregarious and without a care. As such, they, and everyone else, are black and white characters with little shading. If you are really curious to see two legendary actors work together again, I cannot stop you from wasting your money. But, be forewarned, "Righteous Kill" is a dud of a film that tries to be clever but fails miserably. What were these two veteran thesps thinking? I can't imagine it is for the money.