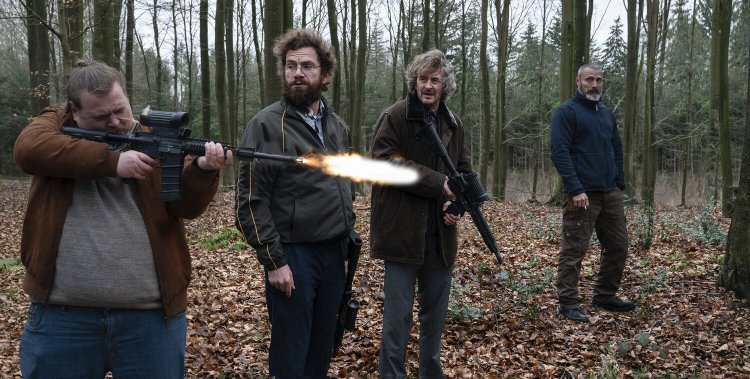 Oddball algorithm expert Otto (Nikolaj Lie Kaas, "Men & Chicken") offers his seat to a woman right before their train is derailed.  He not only suffers survivor’s guilt but finds too many strange coincidences, like the odds of a key witness in an upcoming trial being one of the eleven dead, to accept it as an accident.  He hunts down Emma’s (Anne Birgitte Lind) widower Markus (Mads Mikkelsen), a soldier recently returned from the field to care for his teenaged daughter Mathilde (Andrea Heick Gadeberg), and convinces him his wife’s death was caused by a notorious biker gang, “Riders of Justice.”

Cowriter (with "A Royal Affair's" Nikolaj Arcel)/director Anders Thomas Jensen ("The Green Butchers," "Men & Chicken") reunites his regulars Mikkelsen and Lie Kaas in a family-of-shared-issues comedy built around a violent adventure driven by geeky statistical analysis.  Mikkelsen swaps his alcohol driven quartet from “Another Round” for one comprised of misfits who are stronger, if thoroughly misguided, together than they are apart.

While Emma consoles Mathilde about her father’s inability to return home for the holidays, Otto is sharing the results of his and his partner Lennart’s (Lars Brygmann) costly algorithm with clients unimpressed with their painfully obvious results.  Hours later, Otto will be looking into a hospital room where Mathilde sits sobbing and Markus will be on a military plane.

It soon becomes clear that Markus has trouble with emotions and defaults quickly to violence, something Mathilde is horrified to learn when her boyfriend, Sirius (Albert Rudbeck Lindhardt, "Another Round"), gets punched in the face for returning her home at 10:30 at night.  Then Otto and Lennart arrive with their tale of warring biker gangs and the suspicious man who threw away 14 Euros worth of fast food when getting off at the last stop before the train accident.  Markus is hooked and the trio head over to another of Otto’s colleagues, hacker extraordinaire Emmenthaler (Nicolas Bro, "Men & Chicken"), who is bribed with a pizza to find that man in surveillance footage and then identify him.

This leads to one of the film’s funniest scenes as Emmenthaler insists that only a 97.12% or higher facial recognition match is viable but the only person he turns up is located in Cairo.  Otto and Lennart insist on finding a match in Denmark, and spotting one at 95.8% hit upon Palle Olesen (Omar Shargawi), a man who just happens to fit Otto’s narrative.  Palle’s aggressive stance upon their arrival at his front door triggers Markus’s warrior instincts and the next thing they know they’re in the middle of an all out war.

This off the wall film achieves its humor from character, as each of the foursome’s quirks rub up against the others’.  And when Mathilde sees these men sneaking about their property, she jumps to the conclusion that they are the therapists she and Sirius had suggested, a conclusion Lennart, who’s had 4,000 hours of therapy as a victim of abuse, is all too happy to support.  Jensen juggles comedy, violence and sentimentality, supported by the film’s holiday use of Christmas carols and hymns on the soundtrack.

The ensemble, which includes Gustav Lindh (“Queen of Hearts”) as a Ukrainian sex slave Lennart saves along the way, is aces with Lie Kaas first among equals.  After a climax which will fool no one, the film goes out on a note of sentimental ‘family’ cheer, but one is left wondering how to process violent mass murder as a form of grief therapy.

When their car will not start, mom and daughter, Emma (Anne Birgitte Lind) and Mathilde (Andrea Heick Gadeberg), must take the train instead. A passenger, Otto (Nikolaj Lie Kaas), politely offers Emma his seat but, then, a sudden explosion changes their world. When he learns of his wife’s death, Markus (Mads Mikkelsen) leaves his tour of duty in Afghanistan and heads home. But, the veteran and father is not the emotionless monolith he pretends to be and revenge is on his mind in “Riders of Justice.”

As I started to watch “Riders of Justice,” with tragedy and death prominent almost from the film’s first minutes, I was certain that writer-director Anders Thomas Jensen was creating a taut drama of revenge. There is that, but there is also a great deal of humor and comedy at hand, making for an oddball and entertaining yarn.

After the tragic train wreck and the death of Emma, Otto, a statistical theorist, pitches his idea that the “accident” was no accident to the authorities. They dismiss him as a crackpot. He and his buddies, Lennart (Lars Brygmann) and Emmenthaller (Nicolas Bro), approach Markus and present the “statistical theory” that the accident was a carefully planned hit to kill an informer about to testify against the biker gang of the title.

This is where the story becomes an odd amalgam of slapstick comedy, dark humor, revenge, violence and the aforementioned tragedy and death. The result is a package that should have turned me off but, instead, kept me entertained throughout with its screwball assembly of genres.
The filmmakers come up with a movie that defies being pigeon-holed into one genre and the result is a uniquely pleasing…I do not know what, but I like it.