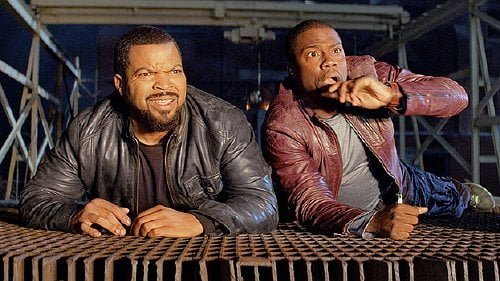 Atlanta police detective James Payton (Ice Cube, "21 Jump Street") doesn't think much of his sister Angela's (Tika Sumpter, "Tyler Perry’s A Madea Christmas") video gaming boyfriend Ben (Kevin Hart, "Last Vegas"). In order to prove himself, the high school security guard gets into police academy, but he may live to regret it when he has to spend 24 hours with his maybe-future-brother-in-law on a "Ride Along."

A little of Kevin Hart's pint-sized, over-caffeinated, over-compensating motormouthing can go a long way so it's no surprise that the overly confident Ben would irritate the glowering, taciturn James. You've seen this mismatched buddy cop movie many times before - in fact, with its Serbian gun runners and internal corruption it bears more than a little resemblance to the McCarthy/Bullock vehicle "The Heat" - but while it's not nearly as much fun as that outing was, it does have its small pleasures and by the film's end you may find yourself liking Ben. Ben prides himself on his high scoring, 'platinum' level as a virtual combat soldier with the handle blackhammer in a multiplayer video game, but Angela's brother only sees short and immature while holding a grudge for a barbecue incident that set him on fire. We must take it on faith why Angela seems to adore the man. With Ben entering police academy and wishing for his blessing to marry his sister, James invites him to be his partner for a day. It's quickly apparent that this will be a hazing ritual and James instructs a dispatcher to send all '126's' his and Ben's way. Having shown a knack for turning a teen in the right direction, a scene which plays to Hart's talents, Ben fails utterly trying to disperse a biker gang or get information from a street kid. His hand-eye coordination with a joy stick doesn't translate at the firing range either, but he does identify a Serbian weapon mentioned by the manager which gives his brother-in-law a clue in his long-standing hunt for the mysterious Omar. When Ben discovers he's been set up for failure by James and his buddies, he becomes more determined than ever, his crazy confidence coming into play just when the stakes become really lethal. Director Tim Story ("Think Like a Man") goes through a checklist, from establishing James as a rogue cop through escalating scenes of nonsensical mayhem. Ice Cube spends the running time looking intimidating and supporting players like John Leguizamo and Bruce McGill just go through the motions. But Hart, annoying but for that one initial inspirational bit of funny, eventually drives the momentum with sheer crazy, masquerading as Omar to his own men. Just when "Ride Along" seems like it's used every last drop in its battered tank, Hart injects just enough fuel to get it across the finish line. A closing credit sequence takes it one lap too far.