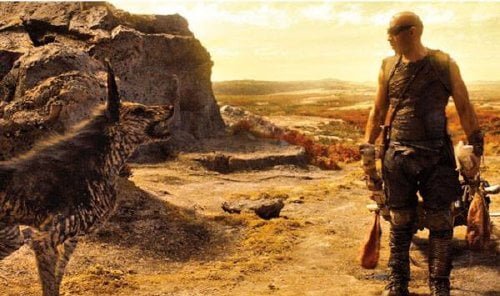 Abandoned by his own people and left for dead on a hostile planet teaming with alien predators, the hero must overcome his latest challenge. In the process, he becomes stronger, dangerously so, and the target for mercenaries around the galaxy who gather on the desolate planet to hunt down and kill “Riddick.”

The first Riddick film, “Pitch Black,” had something going for it with its use of the dark to ramp up tension as the hero takes on a forbidding planet and its monstrous inhabitants. That said, there is a sameness to the original that makes the turbulent adventures of “Riddick” a check off list of events. Trapped on planet. Check. Lots of badass monsters. Check. Mercenaries hunting for Riddick’s head to collect the bounty. Check. Riddick’s night vision tips the scale in his favor. Check. I felt like I had been here before. Oh yeah, I had. The characters, even Riddick, lack dimension and simply go through the motions of killing monsters – and each other. It becomes 10 (actually, 11) little Indians as the star decimates their ranks, especially the bad guy mercs led by Santana (Jordi Molia). You can tell good guy mercs from bad guy mercs very easily – the bad guys are all scruffy and dishonorable and the good guys are all clean cut and honorable (well, as honorable as a group of mercenary killers can be). The special effects are standard for this kind of film fare with loads of CGI stunts and critters – Riddick befriends what looks like a giant dingo dog, showing that he has a soft spot in his heart for a dumb animal. The rest of the cast is made up with some colorful characters (the bad guys, mainly) and, of course, a babe among mercs, Dahl (Katee Sackhoff) allowing Riddick to make lots of lewd “suggestions” to the Amazon blonde. Dialog is also routine with lots of Riddick’s declarations against his human enemies – mostly with threats to kill them in ugly ways. I will not be giving anything away by saying that the final frames of “Riddick” blatantly sets us up for “More Adventures of Riddick.” The fans appeared to be very enthusiastic at the screening I attended, so there is a good chance that the box office take make the next sequel, coming to a theater near you.