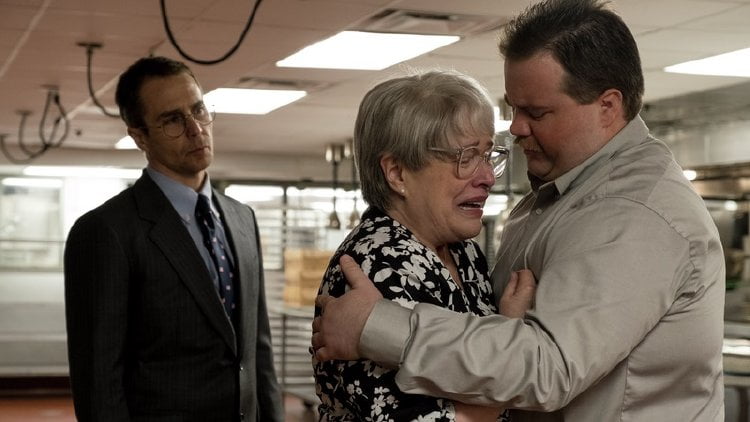 On a July day, a backpack containing three pipe bombs was discovered at Centennial Olympic Park during the 1996 Olympics in Atlanta. Though one person died in the blast and over 100 were injured, the casualty list would have been much, much higher if the bomb was not found first by “Richard Jewell.”

Eastwood's timing in telling a tale that excoriates both journalism and the F.B.I. is a bit suspect, but this is a solid, meat and potatoes retelling of a sad case of media frenzy. Paul Walter Hauser, so impressive in an amusing supporting role in "I, Tonya," ably shoulders the lead as the oddball mama's boy, bullied for his weight, who dreams of a job in law enforcement and Kathy Bates is strong as his initially proud, then devastated mother Bobi. This isn't one of Eastwood's very best, his storytelling style having gotten a bit stodgy, but it works overall even if Jon Hamm's leaking F.B.I. agent is far too shallow, venal and villainous to be believable. (The Atlanta Journal-Constitution has brought a suit against Warner Brothers for its depiction of their reporter, Kathy Scruggs (played by Olivia Wilde), as having traded sex with Hamm's character to get her scoop.)

I had forgotten all about the security guard who saved scores of people on that fateful day in 1996. But, the story of the hero turned bad real fast when a reporter for the Atlanta Journal-Constitution leaked that Jewell was himself under investigation by the FBI as the “lone bomber.” The negative media avalanche that ensued over this report is the basis for director Clint Eastwood’s latest effort at the helm.

The “based on a true story” story is told in a linear, straightforward manner, with occasional story-forwarding flashbacks, that presents the facts (well, facts from a Hollywood perspective) of the events that should have made Richard Jewell (Paul Walter Hauser, well cast) a real hero. Instead, according to the screenplay by Billy Ray (adapted from Maria Brenner’s Vanity Fair article, “American Nightmare: The Ballad of Richard Jewell), the local newspaper article unleashed a tidal wave of negative publicity aimed squarely at Jewell without regard for the facts.

The story briefly follows Richard’s earlier career as a wannabe cop who proves overly zealous in doing his security officer job, even pulling over a driver for an infraction of the laws of the road. His enthusiasm, after discovering the suspicious pack in the midst of thronging crowds and saving many, quickly becomes the focus of FBI special agent Tom Shaw as a “person of interest” in the investigation. Then, Atlanta Journal reporter Kathy Scruggs (Olivia Wilde) makes this public and the media lets loose with both barrels against Jewell. The hero, on the turn of a dime, becomes a villain. It took 88 days before his innocence was announced.

The characters, except for Jewell and his mom, Bobi (Kathy Bates, getting her Oscar moment), take a back seat to the media frenzy caused by the bombing and the ensuing false allegations and the toll it takes on the victim. John Hamm and Olivia Wilde give, or are given, one-note roles, mainly as the bad guys working against Jewell. Sam Rockwell, as Richard’s unexpected friend and soon-to-be counsel, G. Watson Bryant, and his assistant, Nadya (Nina Arianda), get their moments, but never quite enough.