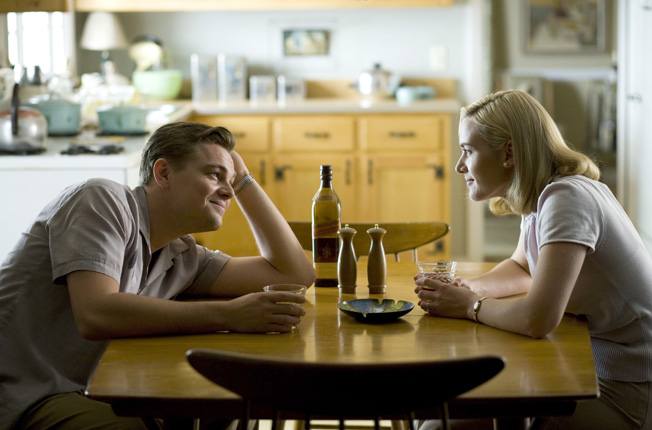 April (Kate Winslet) and Frank (Leonardo DiCaprio) Wheeler are young, upwardly mobile and raising their two children in their 1950s Connecticut suburban home. However, both are frustrated. He, because of his boring, though well paid, job at a computer company. She, when her hope-for amateur acting career goes up in flames. Rescue for the two comes with April’s idea that they pack up their home and family and move to Paris. The best-laid plans, however, can often go awry and they do for the Wheelers living on “Revolutionary Road.”

When aspiring actress April (Kate Winslet, "The Reader") met Frank Wheeler (Leonardo DiCaprio, "Body of Lies") at a NYC party in the mid 50's, she thought she'd never met anyone like him, but marriage followed too quickly by a pregnancy finds the young Bohemian couple following the constant thread of migration to the suburbs and a darling Connecticut Colonial house on "Revolutionary Road." The well-publicized reuniting of "Titanic" team Winslet and DiCaprio's is set in Winslet's husband Sam Mendes's ("American Beauty," HBO's "True Blood") picture perfect production, but although the director has received astonishing performances from his leads, the adaptation of Richard Yates's highly respected 1960's novel by sophomore screenwriter Justin Haythe ("The Clearing") loses the source material's balance and the film slides down its spiralling slope. By emphasizing the breakdown of a marriage without ever establishing the hope and dreams that gave birth to it, Mendes has made leaden and incessantly depressing what was insightful and breathlessly dramatic on the page. If one has read the novel before seeing the film, the alarm bells will go off from the very opening scene. In order to keep her dreams alive, April has joined a fledgling suburban amateur theater group, where she is admired as a city semi-professional. Opening night arrives, and the play sinks in a mire of mediocrity, April's initially riveting performance undone by her reactions to her castmates. Rather than show any of this, Mendes begins with the audience's applause and the fight that occurs on April and Frank's ride home. Why is she so angry? The scales have been tipped against audience sympathy for April before the film has barely started. Neighbors Shep (David Harbour, "Kinsey," "Quantum of Solace") and Milly Campbell (Kathryn Hahn, "Step Brothers"), who symbolize the star struck reaction most Connecticut dwellers have towards the Wheelers in the novel, are introduced getting stood up for opening night after-drinks, then used as the sounding board for April's flight to Paris and once again, the adaptation and the film's director has short-shrifted eyes that would have provided insight, given that unraveling marriage the aura of magic. To their credit, Hahn, and particularly Harbour, make the most of their characters' abbreviated presence - Harbour clearing enunciating his love for April without words, Hahn the insecurities she feels in her sophisticated neighbor's presence. Then there is Frank's workplace, the office equipment company where his salesman dad toiled for decades before sinking into oblivion. Frank is clearly not made of the same cloth - everything comes easy to him in his New York world, including secretary Maureen Grube (Zoe Kazan, "Fracture," "In the Valley of Elah"), who is used not so much as a crutch for Frank's insecurities, a slow boil in the book, but hurriedly, painting Frank as a callous golden boy. Dylan Baker ("Fido," "Spider-Man 3") disappoints as Frank's alcoholic cubical mate and Jay O. Sanders ("Half Nelson," "Cadillac Records"), as the big boss impressed with Frank's flair for marketing, isn't as blundering as he should be. Then there is the Givings family. If the Campbells cloak the Wheelers in idealism, the arrival of the Givings means a shattering of artifice. Matriarch Helen (Kathy Bates, "Failure to Launch," "The Day the Earth Stood Still") is the real estate agent and general neighborhood butt-in-sky of the Revolutionary Road area, but while Bates's soliloquies - about real estate class divisions, or her reflections on her clients to her husband - are hilariously revealing, whenever Bates interacts with other characters it's like she's some kind of emergency stand-in acting with a well-oiled cast - her timing's off and she's just plain awkward. If her ticks and hesitations are meant to convey embarrassment at the behavior of her mentally ill adult son John (Michael Shannon, "World Trade Center," "Before the Devil Knows You're Dead"), it hasn't worked out that way. Shannon, whose eyes always seem to convey derangement or fanaticism, is well cast as the straight-talking John, but the actor's interpretation of his character is the tiniest bit too over-the-top, yanking us out of the film's illusion rather than illuminating the human avoidances and evasions that have become the Wheelers' modus operandi. As the emasculated, withdrawn Howard, Richard Easton ("Finding Forrester") is just right (and well used for the film's closure, an instance of Mendes achieving, for once, the same impact as the book). It's a pity, really, that "Revolutionary Road" wasn't adapted correctly given the passion poured into it by Winslet and DiCaprio. This project was Winslet's baby, and she gets the panic at April's core of staring down a road of children's birthdays and pot luck suppers, too much booze on a Saturday night. Winslet makes you feel April almost willing her last grasp at happiness into being, weakening against the onslaught that is Frank's timidity and complacency. DiCaprio is astonishing here, laying himself bare and raw as he's never done before. If possible, he brings even more layers to Frank than Winslet does to April, with an ever-so-slightly slick and shallow protective shell undercutting his interactions. When Frank finally falls apart, DiCaprio makes it truly devastating. The film's emotional impact may have been severely undercut by its adaptation, but it looks perfect, with the amazing cinematographer Roger Deakins ("No Country for Old Men") giving everything a sunshiny sheen and Kristi Zea's ("The Departed") production design nailing our nostalgia for those golden years with their princess phones and ceramic wall hangings. Costumer Albert Wolsky ("Across the Universe") does a lot to shore up character development and composer Thomas Newman ("Little Children," "WALL*E") creates a melancholy tone that has eluded the director. "Revolutionary Road" is a frustrating failure blessed with too many exemplary parts to completely damn the whole. Winslet obviously got the book - maybe she should have chosen the project as her directorial debut with her husband producing instead.

Based on Richard Yates’ 1962 novel (selected by Time Magazine as one of the 100 best English-language novel since 1923), director Sam Mendes (with the adapted screenplay by Justin Haythe) brings the book to the big screen and reunites its stars for the first time since they paired for the highest grossing film of all time, “Titanic.” Yates’ novel is an icon of American culture but the script falls short of the original work. Instead of simply telling the enthralling tale of the rise and fall of a young suburban couple, scripter Haythe rushes through the book’s first half and concentrates on the angst the Wheelers experience, as told in the second half of the novel. Short shrift is given to the April’s disastrous debut on stage that sets the desire in motion to escape the tedium of their white-collar lives. Her failure to be a star in local amateur theater sparks the idea to give up their suburban lives to find artistic and personal freedom in France. Instead, Haythe speeds through the book’s plot setup and lands well into the story. The luster of the stars, and their fine thesping skills, helps make up for rushed feel of the screenplay and makes the reteaming of DiCaprio and Winslet worthwhile, for sure. The two actors have honed their acting skills over the 11 years since “Titanic” and Winslet, especially, steeps herself in her role as the troubled April. DiCaprio gives a fine performance as Frank but Kate Winslet gets the most powerfully arcing role. Supporting acting is good, not great, with Kathy Bates as the melding realtor, Mrs. Helen Givings, who intrudes on the Wheelers to help her with her institution-bound son, John (Michael Shannon), a sociopath who has the knack to push people’s buttons. David Harbour gives a solid perf as Shep Campbell, a former G.I. who has grudgingly accepted his lot in life with his dull wife, Milly (Kathryn Hahn). Shep lives vicariously through his perceived glamour of the Wheelers, making his boring existence acceptable. Dylan Baker, as Frank’s alcoholic coworker Jack Ordway, has little to work with but, still, invests himself in the role. Other supporting performances are lackluster and two-dimensional. Helmer Mendes shows his directing chops once again and elicits fine performances from his stars. “Revolutionary Road” also does a first-class job in depicting the 1950’s flight to the suburbs with its cookie cutter homes and the increasing affluence of the times. It also does a good job in costuming (by Albert Wolsky) the players with its time-accurate feel. It is a tough job to adapt a great novel for the big screen. A few, like “Gone with the Wind” and “Jaws,” meet or exceed their source material. Most, though, fall far short of their source. “Revolutionary Road” is somewhere in between, falling just a bit short in adapting Yates’s striking first work. It is good, not great, and it is the two stars that make this worth the price of admission. The awards-contending season has some stiff competition. After reading the Yates novel, I had high hopes for Mendes adaptation but it is the pairing, again, of Kate and Leo that is the draw.