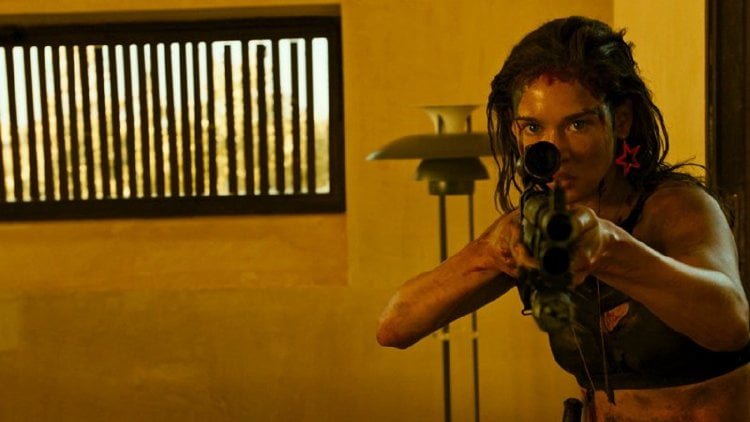 Wealthy businessman Richard (Kevin Janssens) uses his annual hunting trip as an excuse to get some time in with his mistress Jen (Matilda Lutz), but when his buddies Stan (Vincent Colombe) and Dimitri (Guillaume Bouchède) arrive early, Jen learns her true worth to all three and shocks them with her unfailing focus on "Revenge."

Purportedly a feminist film because its rape victim is a superhuman survivor who fights back, writer/director Coralie Fargeat's "Revenge" is a stylishly shot exploitation movie whose heroine is defined by the amount of butt cheek peeking out of her short shorts. Perhaps Robrecht Heyvaert's ("The Ardennes") camera traveling up and down the length of Jen's body is meant to be ironic, but all this viewer saw was the male gaze. The situations portrayed here are alternately predictable or ridiculous, but the filmmaker gets points for the blood-soaked circular topography of her climax. A helicopter lands in a remote desert setting dominated by a cool modern dwelling announcing its occupant's wealth. The fit, tan Richard leads the much younger, blonde Jen inside, both happy to get down to business. A phone call alerts us to Richard's wife, who is planning a dinner party menu, and to his duplicity. Later, Jen, munching on a green apple, is startled by the sight of two heavily armed, leering men on the patio. Stan and Dimitri shoot their friend approving glances while pointedly asking 'How's the wife?' That night, Jen dances with a delighted Stan, but the next morning it's clear he's read more into it than she intended. With Richard on an errand, Stan rapes Jen while Dimitri watches, munching chips. But when Richard returns, something strange happens. Jen mentions his wife, a fatal error, and suddenly all three men turn against her. She runs, they follow, and she finds herself at the edge of a cliff. Richard pushes her. She is impaled on a jutting branch, ants gathering below in the forming pool of blood. So, who could survive such a thing? When Richard, Stan and Dimitri travel down to deal with the body, all they find are bloody footprints heading off into the distance (footprints, I might add, that are so perfectly placed they look machine made rather than those of a staggering, mortally wounded woman). The men split up and soon Jen is lurking behind Dimitri, his rifle within reach. There is nothing believable about Jen's vengeful journey, not her peyote drugged self-surgery with fire and a beer can, not her ability to walk miles over rocky earth in bare feet. When she kills one man in water, we just know his corpse will bob up in front of one of the others, no matter the distance that had separated them. Fargeat does maintain visual interest throughout, her locations' unrelenting sunshine and parched earth giving it the look of a spaghetti Western. She also revels in blood and gore, allowing one scene of a man picking shards of glass from his sole to go on for what seems like fifteen minutes. Lutz, whose openwork plastic star earrings recall "Lolita's" heart-shaped sunglasses, doesn't create much in the way of a character, Jen's surface appeal about as deep as she gets. Janssens is a hissable smoothie, almost a male model compared to the animalistic Colombe and Bouchède. Grade: