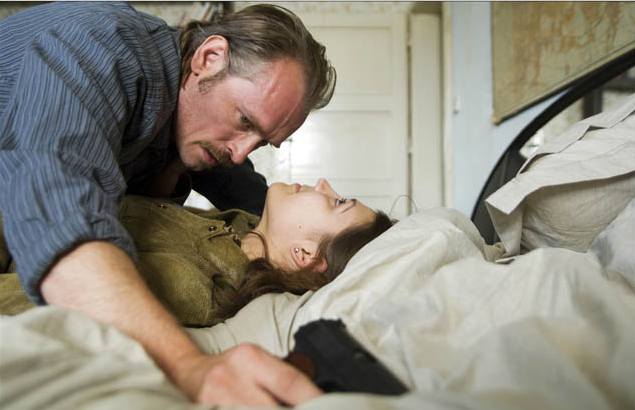 Ex-con Alex (Johannes Krisch) is in love with Ukrainian prostitute Tamara (Irina Potapenko) and wants to pay off their huge debts so they can make a new life together. His plan is to rob a rural bank to get the money, though Tamara is afraid that things will go wrong. He pulls off the heist but a police officer, Robert (Andreas Lust), happens by and shots are fired. Tamara is hit and slumps down, dead, in the passenger seat of the stolen getaway car. When Alex hides out at his grandfather’s (Johannes Thanheiser) farm, he learns that the policeman lives nearby and decides to get his revenge in “Revanche.”

In Austria's submission for the 2009 Foreign Language Picture Oscar, writer/director Götz Spielmann works a tricky little bit of business. He begins his film in a seamy underbelly of Vienna most people wouldn't know about where ex-con brothel worker Alex (Robert Carlysle lookalike Johannes Krisch) dreams of partnering in a bar in Ibiza. He needs 80K Euro, though, and his clandestine girlfriend, Ukranian hooker being groomed as call girl Tamara (Irina Potapenko), is $30K in debt. So Alex sneaks Tamara away from their boss, Konecny (Hanno Pöschl, "Querelle"), and, on the way to his grandfather Hausner's (Hannes Thanheiser, groundedly charming) rural farm, he robs a bank. But local policeman Robert (Andreas Lust, "The Time of the Wolf") fires at his fleeing tires, a bullet goes astray and Tamara dies. Susi (Ursula Strauss, "Free Radicals") the woman who has kindly taken an interest in Hausner, driving him to Church each week, happens to be Robert's wife. Alex soon discovers the connection and he wants vengeance, just as Robert is riddled by guilt and looking for redemption. In addition to the juxtaposition of a Vienna tourists rarely see with the 'hearts and flowers' kitsch countryside they imagine, Spielmann offers us an anti-hero in Alex, a guy who breaks the law but who dreamed of a better life for Tamara and who earns his grandfather's respect with his hard work (a way to get the girls, Hausner remarks, in a way which ever so strangely proves true). Alex splits wood with a vengeance, indeed, another split image of violence and honest labor. Krisch delivers a riveting performance and he's well supported by Strauss and Thanheiser. What finally makes "Revanche" so satisfying is that Alex's revenge is achieved and yet neither he nor its victim are aware of it. Now that's some writing. The film's images are been beautifully composed and lit by cinematographer Martin Gschlacht.

Things start of sordidly, in this film written and directed by Austrian-born Gotz Spielman, as we enter the underworld of illicit sex and prostitution. Things change, though, when Alex decides that he and Tamara deserve a better life and hatches the plot to rob a bank. He figures the best and safest bet is a branch in the small town near his grandfather’s farm. However, the best-laid plans often go awry and this is the deadly case for Alex and Tamara. Following her untimely demise, Alex, wracked with sorrow and guilt, hides out at grandpa’s home where he learns that Robert and his wife live nearby. His plan for revenge, though, is cooled when he learns that Robert is as remorseful, even more so, than he. Things get even more complicated when Robert’s wife, Susanne (Ursula Strauss), enters his life via her friendship with his grandfather. Childless Susi (and Robert’s impotence is the reason for this) is scorned by revenge-seeking Alex but she, still, invites him to her home when Robert is not there. The reason becomes obvious as the story unfolds. “Revanche’s” lead male characters, Alex and Robert, are two sides of the same coin. For very different reasons, both feel guilt and grief - Alex for bringing Tamara into his robbery scheme, resulting in her premature death, and Robert for accidentally killing the innocent young woman when he tried to shoot out the tires of the getaway car. It was the first time he fired his gun in the line of duty and the result stuns the young cop. This duality between the two men is a major theme in the film. Director Spielman does a solid job telling this sad story that, in the end, is one of redemption for both men. The careful weaving of the intricate relationships among the principals is deftly handled and keeps the viewer guessing the film’s outcome. There is nothing predictable or pat, something many America films are guilty of, and this is the charm.