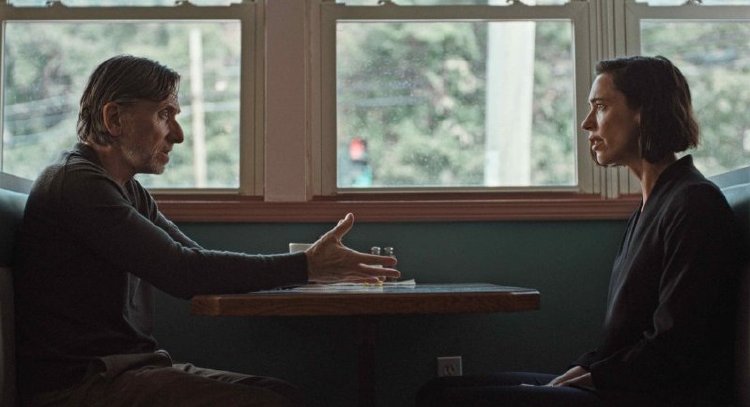 Margaret (Rebecca Hall) is an executive at a biotechnology company mentoring Gwyn (Angela Wong Carbone) in both her work and personal life while adjusting to the idea that her seventeen year-old daughter Abbie (Grace Kaufman, "The Sky Is Everywhere"), who she is fiercely protective of, is about to leave for college.  Then one day she spies David (Tim Roth) at a conference and experiences a panic attack so extreme, we realize how hard she’s had to work to overcome the past trauma which will consume her anew in “Resurrection.”

Hall and Roth both sink so entirely into their respective roles of abuse victim and sadistic manipulator, and do so with such intelligent restraint, that it is difficult to take issue with their film, but the control David has over Maggie as concocted by writer/director Andrew Semans is just too outlandish to take seriously.  This might have worked better given some edgy visual interest, but instead the drama unfolds in the generic, colorless spaces of a bland American backdrop (actually Albany, NY).  Even composer Jim Williams, who’s created unique scores for everything from “Kill List” to “Titane,” relies on strings climbing up and down the scale.

David is shrewd, acting so innocently that Maggie appears to be stalking him instead of the other way around, so the police have nothing to go on when she tries to obtain a restraining order. When he finally says her name, mentioning Abbie with a leering grin, it is genuinely shocking.  At work Gwyn, who Abbie has guided away from an unhealthy relationship, notes how troubled her boss looks.  ‘Have you ever done anything bad?’ Maggie asks.  She then relates her history with David and it is so outrageous, so bizarre, we, like Gwyn, wonder if she’s joking, even if it explains that particularly ghoulish nightmare we’ve recently been privy to.

Abbie is already feeling suffocated by her mother when Margaret begins to spiral into paranoia.  Concerned, she enlists her mother’s married lover Peter (Michael Esper) for an intervention, but despite Peter’s declarations of love and concern, Maggie literally attacks him.  After diluting suspense with repetitive attempts at violence, the film’s climax is Grand Guignol, its epilogue a bit of ‘happy ending’ surrealism so brightly lit it suggests a sanitarium setting.

It is quite clear what Semans is attempting to accomplish here, but he does so in a manner both so convoluted and over the top that it all adds up to a particularly unsatisfying experience, despite superior work by Hall and Roth.  In a tiny role as a boarding house desk clerk, “Split’s” Rosemary Howard carves out a terrifyingly unexpected jolt of a performance, one of the film’s rare grace notes.