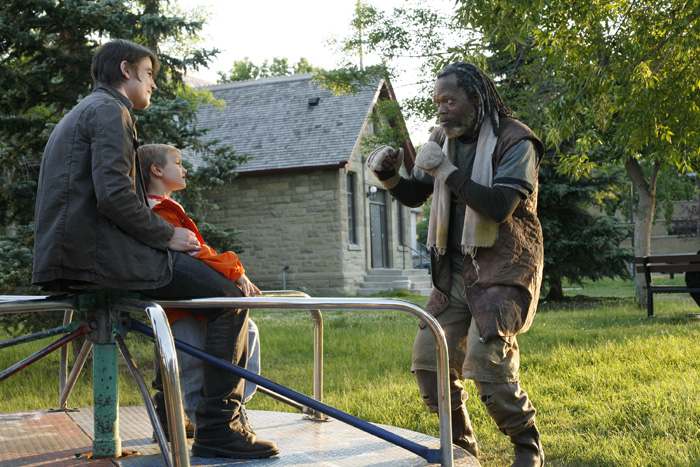 Erik (Josh Hartnett) is a Denver-based sports writer assigned the go-nowhere job of covering the local boxing beat. When he rescues a homeless man from an assault by street thugs, he discovers that the man is none other than Battling Bob Satterfield (Samuel L. Jackson), a former boxing champ long thought to be dead. Erik knows that this is the story that may give him the success he craves and he goes about "Resurrecting the Champ."

Erik's life in a state of flux. His boss, Metz (Alan Alda), has banished him to cover the boxing scene in Denver and not 'real' sports. The writer turns over his copy quickly but, according to Metz, it is just a lot of typing with little soul. Erik is also dealing with a failed marriage with his co-journalist wife, Joyce (Kathryn Morris), and suffers the pain of separation from his young son, Teddy (Dakota Goyo). And, he lives in the professional shadow of his late, famous sportscaster father. Things change for the better for the young journo when he crosses paths with Battling Bob. Bob tells him that he once was number three in line for the heavyweight championship, lost his chance and ended up on the streets of Denver. This info gives Erik an idea that just may get him out of the cellar at his newspaper. He mentions it to his Metz who does not see the merit of an article about a has been boxer. Erik goes over his boss's head and pitches his plan to his newspaper's publisher, Whitley (David Paymer), and gets the green light. Erik runs with the chance to get his 'title shot' and the result is his magazine article titled Resurrecting the Champ and the buzz on the piece resounds with the possibility of a Pulitzer Prize. Then, he gets an offer to be the color man for a Showtime program covering a world championship boxing match in Las Vegas. Things are looking up for Erik when his research for the article comes under scrutiny. It seems that Battling Bob Satterfield may not be Battling Bob. Erik's rapid rise is about to have an even faster fall. Director and co-writer Rod Lurie (with Michael Bortman, Allison and J.R. Moehringer) brings us a story, inspired by a magazine article, that delves into the life of its protagonist, Erik, and the effect on it when he meets the Champ. The two actors, Hartnett and Jackson, fill their roles well, especially Samuel L. The veteran actor envelops himself in character, giving Bob full dimension with his raspy tenor voice and fighter's shuffle. He is a pleasure to watch and is a key reason to pay the price of admission. He and Hartnett have a palpable chemistry, too, as the younger thesp holds his own with his co-star. The rest of the cast nicely fills the film's background. Techs are solid all around. "Resurrecting the Champ" is an inspirational tale about the rise, fall and rise, again, of a journalist as he tries to bring to life the story of an old boxer who lost his chance for glory a long time ago. Lurie and company do a fine job in the telling.