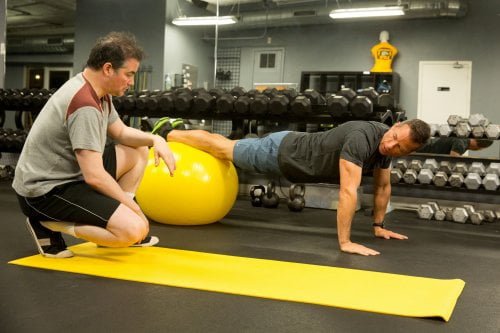 Danny (Kevin Corrigan) is a middle-aged slacker, just divorced, and made filthy rich when his estranged-for-years mother dies and leaves him a fortune. He decides he “wants to learn how to take a punch” and looks to Trevor, the owner of the Power4Life gym, to help him turn his life around and get “Results.”

Danny (Kevin Corrigan, "The Departed," "Pineapple Express") might live in a McMansion with wads of cash, but the recent divorcée is unlucky in love. When he crosses paths with Austin's Power 4 Life gym, its exuberant owner Trevor (Guy Pearce, "Memento," "The Rover") sells him, but it's its take-no-prisoners trainer Kat (Cobie Smulders, TV's 'How I Met Your Mother,' "The Avengers: Age of Ultron") and her artful lunges that convince him he just might get "Results." Writer/director Andrew Bujalski ("Funny Ha Ha") has gotten pegged as an originator of the mumblecore movement because his first couple of films featured young people speaking in the normal, halting speech of real life. His last film, "Computer Chess," was a new twist in his ouevre, combining comedy, technology and sex shot on an old video camera in black and white. Now he veers again, with his starriest production yet for his own unique take on the romcom and it's a delightfully twisted take on the classic love triangle. Kevin Corrigan is one of those character actors I've always felt were under appreciated, so it is delightful to see him in a lead role, especially one that allows him to flaunt that grounded in his own spacey outsiderness quality that makes him special. With thinning, graying hair and a Play-Doh physique, Corrigan creates such an artless, lovable depressive, it's a thrill to see Smulders' Kat give him a chance. Kat's bent out of shape when Trevor assigns their latest private client to Lorenzo (Tishuan Scott, "Computer Chess"), who she tags a 'bisexual gigolo' in her frustration over his popularity. Kat doesn't mince words, a trait Trevor's cautioned her about, but when she asks for Danny, Trevor is concerned for a different reason - her safety - due to Danny's nonexistent social skills (and the uncommitted 'coworkers-with-benefits' relationship he shares with her). She goes to visit anyway, equal parts encouragement and amusement, then departs with demands that he keep a food diary for her. Various inventively shot pictures of pepperoni pizza ensue and Danny even gets her to hang out the next time. After sharing a spliff, Kat kisses Danny, but when on her next visit she's greeted with a candlelit dinner table and string quartet, she marches out in a huff. Danny, who seems to solve all his problems by paying people $200 (to turn his TV on, to get a cat delivered), takes a most unusual step to continue his woo, the plot encompassing his new lawyer Paul (Giovanni Ribisi, TV's 'Friends,' "Ted"), the shady type whose secretary wears a see-through blouse to the office, Russian “kettle bell master” Grigory (Anthony Michael Hall, "The Breakfast Club") and a polished blonde real estate agent. Somehow Bujalski wraps his film in a most traditional way for the genre while you're still being amazed at how he got there. The Austin production is shot with style and a keen eye for color (note the popping reds in an otherwise gray airport scene). Bujalski even milks sound for comedy as he cross cuts between two characters and their dueling iPod selections. The heavily percussive score fits right in with the repetitive beats of a gym. Grade:

Andrew Bujalski was one of the original mumblecore filmmakers with his early films, “Funny Ha Ha (2002)” and “Mutual Appreciation (2005).” The actor-turned-director is best known for casting non- and little-known actors in his films, but he has taken a quantum leap with “Results” and its name cast. We have seen Kevin Corrigan for years in smaller, character driven roles but, with “Results,” he gets top billing with his costars. Danny, without his new money, would probably be living in a homeless shelter. But now, with his wealth, he decides to live the good life, buys a McMansion and a whole bunch of toys. It is not enough, though, and when he sees Trevor’s TV spot, he makes the decision to get in shape. Kat (Cobie Smulders) is Trevor’s number one trainer and demands that she get the lucrative new client’s account. Trevor sees something off-putting about Danny and does not want to expose Kat to what could be an unpleasant job. She insists and Trevor relents. As things will turn out, Trevor is right in his suspicions. “Results” is not about a pervert, though Danny is one. It is really about Trevor and Kat, their past and present and how Danny will become a catalyst in their lives. Bujalski, who also wrote the script, does an excellent job in playing out his oddball romantic comedy and creating fully formed characters as he lets his actors inhabit them, making this three-hander amusing to watch and unpredictable. This is a good thing.