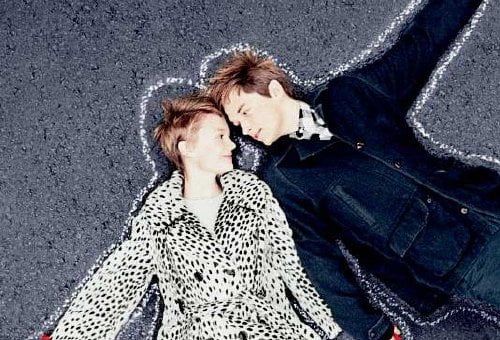 Enoch Brae (Henry Hopper) is an angry young man who crashes funeral services when he's not playing Battleship with Hiroshi (Ryo Kase, "Letters from Iwo Jima"), the ghost of a Kamikaze fighter pilot. Annabel Cotton (Mia Wasikowska, "Alice in Wonderland," "Jane Eyre") is a luminous cancer patient who idolizes Charles Darwin and loves sea birds. When the two meet at a memorial, Enoch discovers himself engaging with the world again in "Restless."

Director Gus Van Sant ("Paranoid Park," "Milk") didn't write his latest, but presumably he read it, so one wonders just what about this thoroughly twee modernization of "Harold & Maude" he found so engaging. This is a film that exemplifies nepotism - producer Bryce Dallas Howard, a college pal of writer Jason Lew, got her father and his business partner to produce (which yielded Van Sant) and the late Dennis Hopper's son indulges the idea that he might have acting talent in his genes. The only character who engages at all is the one who's already dead. One must become immediately suspicious of a movie whose protagonists sport names out of an Edward Gorey story and whom costume designer Danny Glicker ("Milk") turns retro hipster with Enoch in a tight black suit paired with riding boots or Keds when he's not outdoors in an Edwardian silk robe. Wasikowska has been so 'Mia'ed' out one expects her to begin eating raw chicken livers at any moment, except that Polanski at least made Farrow look ill in "Rosemary's Baby," while this Mia's brain cancer is only made evident with one rather graceful seizure. Even the art direction is too cute, with little fairy plants on the Cotton kitchen table and all around Annabel's bed. Danny Elfman's soundtrack initially evokes the romantic naivety of Hans Zimmer's "True Romance" work. Everything about these two is just too calculatedly precious, it's like watching two ten year-olds fall in love. Lew's dialogue and situations constantly dance around themes of death while cinematographer Harris Savides keeps his images so light and bright the film almost seems washed out at times. Wasikowska holds her own and can walk through this unfazed, but it's a very inauspicious start for Hopper. Ryo Kase is quite good as the English speaking pilot who seems to have anticipated passing on lessons about telling the ones you love that you love them before it's too late. Support is unduly bulked up with Jane Adams (HBO's 'Hung') having little to do as Enoch's Aunt Mabel, caring for him after the death of his parents in a car crash, and Schuyler Fisk ("Orange County") as Annibel's devoted older sister. One of the film's few bits of realism involves the almost uncommented upon alcoholism of Annibel's mother Rachel (Lusia Strus, "Stir of Echoes"). Chin Han ("The Dark Knight") plays Dr. Lee, who calls security on Enoch in one scene and counsels him in the next, while Victor Morris is the kindly secuity guard who gets the pair out of scrapes (like crashing the hospital's morgue to bone up on death). Gus Van Sant has been making films about troubled youth since the beginning of his career, but he wrote "Mala Noche" and "Last Days" and "Drugstore Cowboy" and "Elephant." After his experimental run of "Gerry" through "Paranoid Park," "Milk" was a return to linear storytelling with a script not his own and it worked. This one decidedly does not. For young teenaged girls with Hello Kitty bedrooms only.