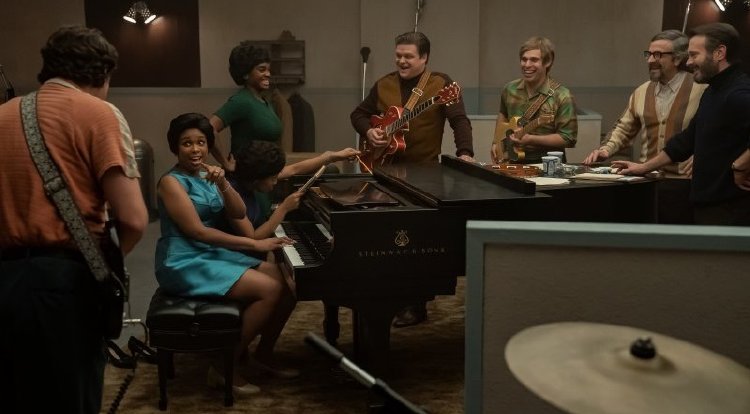 When she was a little girl, Aretha Franklin (Skye Dakota Turner) was kept under the thumb of her controlling pastor father C.L. Franklin (Forest Whitaker) who exploited her talent to grow his church, then steered her away from Motown producers to NYC’s Columbia Records where her jazz standards never caught on.  Aretha’s rebellion led to a bad marriage, but her first husband steered her towards Atlantic Records’ Jerry Wexler (Marc Maron), who sent her to Muscle Shoals in Alabama to record.  It was in this environment that Aretha found she could demand “Respect.”

Director Liesl Tommy (HBO’s ‘Insecure,’ ‘Mrs. Fletcher’) takes the quickly-becoming-clichéd biopic approach of only focusing on a particular period of her subject’s life for her feature directorial debut, but it turns out to be the right one.   ‘The Americans’’ writer Tracey Scott Wilson charts Aretha’s evolution from the Gospel singer under her father’s thumb to the hit recording artist who demanded the release of a Gospel record in order to recharge her soul (and which turned out to be the biggest success of her career, despite Atlantic’s hand wringing).  If only the filmmakers didn’t obscure and conjecture so much about her private life, “Respect” may have had even more power than what Jennifer Hudson, hand picked for the role by Aretha, brings to it.

Aretha’s childhood is depicted as cushy, yet abusive.   At the age of 10, she’s woken and trotted out like a show pony to perform for her father’s houseful of glittery guests (which include the likes of Sam Cooke (Kelvin Hair), Dinah Washington (a fiery Mary J. Blige) and the man ‘Re’ called Uncle Martin, Martin Luther King Jr. (Gilbert Glenn Brown)).  She loses her adored mother (Audra McDonald, who shares a moving duet with Turner) both through divorce due to dad’s philandering and death at an early age.  And, the filmmakers imply, she was raped at one of those parties, bearing a child at the age of twelve (Franklin never set the record straight about the father of the two children she had by the age of fourteen, but many accounts point toward a school friend).  When Re withdraws, her father reacts with annoyed frustration and his mother’s (Kimberly Scott) efforts to get to the underlying reason are stubbornly rejected.  It is her lifelong champion and mentor, her father’s musical director the Reverend Dr. James Cleveland (Tituss Burgess), who gets her to sing at church again, telling her that her music will save her life, her reemerging voice used as the pivot point for Hudson to step into the role mid-song.  The young Turner has the vocal talent to portray Aretha but her acting is comprised of only two registers – wide eyed delight or introverted silence.

And it must be said that Hudson, too, soars during scenes of performance and collaborative song evolution (one with the white Muscle Shoals musicians as she reworks ‘I Never Loved a Man (The Way I Love You),’ a second making Otis Redding’s titular song her own with sisters Erma (Saycon Sengbloh) and Carolyn (Hailey Kilgore)).  When Ted White (Marlon Wayans) turns her head at a family barbecue, her father is quick to react, banning the young man, but Aretha gets her way, Hudson allowing the woman’s sexual appetite to emerge if not her independence.  White begins to balk when she begins to take control of her career, beginning at Muscle Shoals, but the marriage drags along until she returns home with a black eye and children in tow, just as her father predicted (and the movie never clarifies where those children came from nor how many there were nor their mother’s relationship with them).

As Aretha conquers the globe, she takes up with her tour manager Ken Cunningham (Albert Jones) and suddenly she’s exhibiting problems with alcohol causing more drama with both her family and the public (a notorious fall off a stage in Ohio is depicted).  Hudson’s low key portrayal turns abusive to others, but the filmmakers haven’t laid enough groundwork for the sudden switch.  Better is the way she comes out of it by embracing her roots, notably with the assistance, once more, of Cleveland, for her 1972 recorded performance at the New Temple Missionary Baptist Church in Los Angeles (the documentary of which, “Amazing Grace,” she suppressed until it was released in 2019 after her death).

Hudson, who had to find the rawer, live quality of Franklin’s voice that propelled her to fame, really captures the experience of listening to the original without slavish imitation, but it is within the film’s dramatic interconnective tissue where both she and the filmmakers wobble a bit, Hudson’s performance too quiet, the film becoming bumpy and episodic.  For example, the film’s portrayal of the Civil Rights movement is marked by Aretha’s desire to march with Uncle Martin against her father’s wishes, her commitment to performing at King’s request touched upon later.  But we end on a high note with ‘Amazing Grace,’ a moment which also sees Aretha’s uneasy reconciliation with her father and the support of his long time mistress Clara Ward (a strong Heather Headley).

Tommy stuffs a lot of information in with her closing credits (Aretha was the first woman inducted into the Rock and Roll Hall of Fame, winner of 18 Grammy awards, the youngest person to receive Kennedy Center Honors and the recipient of a Presidential Medal of Freedom), where she also features Franklin’s jaw dropping performance of ‘Natural Woman’ at Carole King’s Kennedy Center Honors.  King also cowrote the film’s only original song, ‘Here I Am (Singing My Way Home),’ with Hudson and Jamie Hartman.  The film’s production is awash in period detail, from its overall design and art direction to costume, hair and makeup.  “Respect,” is perhaps, a little too respectful of its subject, but Hudson shines and Whitaker maintains a tricky balance.

The Queen of Soul deserved her title and all the accolades that went with it. But do we know of how hard she fought to earn that honor? TV director turned tyro feature helmer Liesl Tommy shows us the life of Aretha Franklin in “Respect.”

While Jennifer Hudson does a remarkable job presenting Aretha on-stage and sounds just like the chanteuse, the movie is flat. By that I mean the story, written by Tracy Scott Wilson from a story be Callie Khouri, covers the singer’s life as a precocious child of 10, with the voice of someone 30, to the aforementioned time as the queen of soul and her re-emergence with her famous Gospel album in 1972.

The coverage of that era checks off all of Aretha’s life boxes, the ups and downs and the struggles of being a star, but it all just seemed perfunctory to me. I never wrapped my arms around Hudson as Aretha except when performing. More than once, I thought of “Lady Sings the Blues (1972)” and the several memorable performances, including Richard Pryor in one of his earliest dramatic performances as the hapless junkie, Piano Man. “Respect” characters are not fleshed out nearly enough to give real personality.

But, I came to this movie because Aretha Franklin has always been one of my favorite singers of the 60s and 70s and the filmmakers do a solid job in giving us some of her most famous songs, including the title. Too bad the rest of the film did not equal Jennifer Hudson’s marvelous voice and impersonation of Queen Aretha on stage.