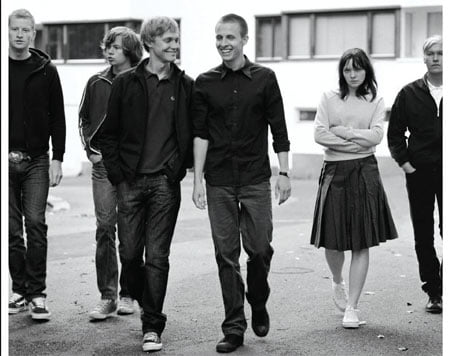 Twenty-something Phillip (Anders Danielsen Lie, 1990's "Herman") and Erik (Espen Klouman-Høiner) flank either side of a red post box in their hometown of Oslo. Each is an aspiring author with a manuscript awaiting its fate. Cowriter (with Eskil Vogt)/director Joachim Trier jumps right out of the box to show us what might have been before progressing with what does, giving every fork in the road a "Reprise."

This festival (Best Director, Karlovy Vary; Discovery Award, Toronto) and Norwegian film awards winner owes more than a nod to Tom Tykwer's fate-bending fairy tale, "Run Lola Run," with its narrated 'what if' and flight of fancy' scenarios which continually spin off the main action. But unlike Tykwer's film's gimmicky, post punk story line, Trier offers something more complex and real. And the film's got a killer soundtrack. After imagined futures as authors who have 'disillusioned the Dalai Lama' and shaped the sexuality of the twelve year old son of a baker, Trier puts us six months in the future where we discover that Phillip's 'Fantombuilder' became a minor cause célèbre and he wooed away the girlfriend of a local rock star, but suffered a severe mental breakdown in the process. Erik's book was rejected, but he is still pecking away and involved in a relationship with Lillian when he's not looking after Phillip. It is Erik who goes to pick up Phillip from the hospital and he brings their entire circle of friends for support. This bunch of guys are epitomized on opposite ends of the scale by Geir (Pål Stokka), a quiet tagalong only befriended as brother to a member of Kommune, the band the guys worship, and Henning (Henrik Elvestad), that band's antagonistic leader post band breakup. Lars (Christian Rubeck, "Millions," "The Girl in the Cafe"), mocked from within for his Hitler Youth haircut (an apt description), spouts the group's philosophy - that woman are not men's intellectual equals and that any man who falls into a relationship will breed retarded bourgeoisie. This is why Erik is trying and failing to break up with Lillian (she finally calls his bluff after putting up for years) and could perhaps explain Phillip's psychosis as an intellectual trying desperately to recreate his former bond with Kari (Viktoria Winge). Of course, it underlines this group's immaturity and Trier tweaks his own characters by having both Lars and Henning succumb to the fairer (and far more mature) sex and wrapping his film at a wedding (while still neatly paralleling that funny and fanciful opening). The mostly non-pro cast is first rate under Trier's direction. Danielsen Lie, resembling Lola's Moritz Bleibtreu, creates tension with his mental instability. A tendency to predict things will happen at the end of a count from ten gives him an ominous tool as the film progresses. Puppyish Klouman-Høiner, a young Hugh Grant lookalike, is the nice guy willing to be led by the nose, his moral meter not yet strong enough to overcome peer pressure. The photogenic Winge is terrific as the girlfriend turned caregiver. Sigmund Sæverud lives up to the aura of mystery the boys have built around reclusive writer Sten Egil Dahl. Film editor Olivier Bugge Coutté gets kudos for stylishly maintaining the film's flipping time lines ("La Jetée" seems another influence, especially given "Reprise's" Parisian hops) and cinematographer Jakob Ihre achieves the feel of the French New Wave with color and black and white. Musical selections include the Norwegian punk band Kommune, The Jam and Joy Division. Costumes include a wide array of black rock tees. "Reprise" captures the hopeful vistas of young adulthood and the bumps along the road as assumed wisdom is more rightfully gained through experience while also considering the influence of prior artists on those trying to break new ground (something which can be seen within Trier's own film). It is a fresh, often funny, wiser beyond its years film from a new talent to watch.