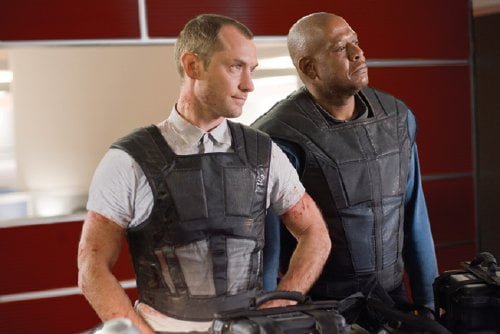 In the not-too-distant future human life has been extended through the use of artificial organs. But society operates under Capitalism and if you can't make your payments it will cost you your life. One of the best debt collectors in his field is Remy (Jude Law), but when he has an on-the-job accident, he awakens to discover he has an artificial heart. And a bill he cannot hope to pay. Remy goes on the run, but he is being pursued by someone who knows him intimately - his former partner Jake Freivald (Forest Whitaker), one of the very best of the "Repo Men."

Do not confuse this with Alex Cox's 1984 cult hit "Repo Man." The only thing this unpleasant excuse for entertainment has in common with that film is a pluralized title and sci-fi'ed spin on the titular profession. I haven't wanted to walk out of a movie so many times as I did with "Repo Men," which rips off a bunch of better films with a witless script from Eric Garcia and Garrett Lerner. The film begins with establishing shots of a city stolen from "Blade Runner," complete with rain slicked streets, huge screen video ads and Asian characters. Remy and Jake act like a couple of punks as they bring down folks overdue on payments for artificial organs and perform hack surgery (feature debuting director Miguel Sapochnik loves to put these details in gross out closeups) to repossess them. After a day's work, the 'boys' sit around, drink beer and laugh about the way this or that one pleaded or whimpered. But Remy's wife, Carol (Carice van Houten, "Black Book," "Valkyrie"), hates his line of work and is pushing him to get into sales. This upsets Jake who thinks Remy is weak to even consider it. When Jake has a mark taxi'ed over to a barbecue at Remy's so he can yank the guy's liver out in front of Remy's house, Carol throws Remy out. After a repossession goes bad and Remy wakes up with an artificial heart, he suddenly has a change of one and cannot continue with his job. He's forced to go underground where he meets up with Beth (Alice Braga, "Blindness," "Crossing Over"), a walking bionic woman of sorts. There is no attempt to do anything intelligent with the premise. Apparently, the only people who live in this unidentified city are repo men and those about to be repossessed because Carol's is the only voice of outrage. There is no political subtext at all, unless you want to read the company sales pitch as an equivalent to a subprime mortgage and the whole thing as an essay on affordable health care. But that would be giving this film way too much credit. Jude Law is having a really bad run in leading roles and Forest Whitaker doesn't seem to mind that his stock has been dropping fast too. More appalling is that their boss is played by Liev Schreiber - what's he doing in this trash? As Beth, Alice Braga ("I Am Legend," "Crossing Over") adds the little interest to be had here. In one scene Tiffany Espensen gets a laugh as an underground surgeon/black market technician - who happens to be nine years old. The bizarre climax is a bloody affair that plays like the sex scene between Rene Russo and Mel Gibson in "Lethal Weapon IV" crossed with "Videodrome." It almost works, but it's followed by a totally bogus 'twist' that's been done before and better and without compromising a major character. "Repo Men" is a murky looking downer, a film of no artistic merit and even less entertainment value.