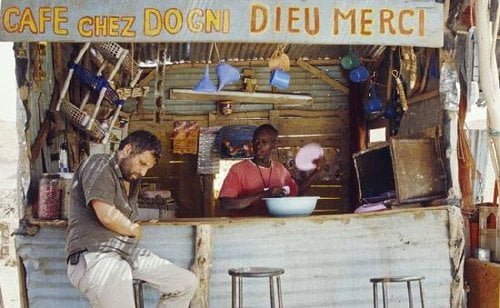 Alex (Stephane Guillon) is traveling, on some unnamed business, through the harsh heat of an unnamed former French African colony. He is driving during a local feast, a taboo, and his car breaks down in, quite literally, the middle of nowhere. As he tries to get several unemployed village men to help him, unsuccessfully, to push start the car, he becomes increasingly convinced that he will never get out of his own piece of hell until “The Time of the Charity Fete Is Over.”

On his way to a construction job heading north, Alex (Stéphane Guillon) has the misfortune to break down in a remote African town outside a military base. He quickly bonds with the entrepreneurial Dogni (Malik Sall), the local hotelier, service station manager and bar owner, but he's quick to note the profit Dogni is making from him and the locals haggle over the cost to push his car. At the base, Lieutenant Bado (Eriq Ebouaney, "35 Shots of Rum," "Thirst") plays with his head, first saying he will not be responsible for helping the man to leave alone in case something should happen, eventually leading up to the titular rant, an African 'I'm mad as hell and I ain't gonna take it anymore' allocution on white colonialism. The self-professed 'white man,' who seems to think the town, and Dogni's beautiful cousin Martina (Aïssa Maïga, "Caché," "Paris, je t'aime"), owe him special services, cannot see he is the object of their scorn in "The time of the Charity Fête Is Over." Writer/director Frédéric Chignac makes an astounding feature film debut which may just be the find of Boston's Museum of Fine Arts's 15th annual French Film Festival. From the festival description I was expecting a cross between Israel's "The Beetle" and "Bagdad Cafe" - I couldn't have been more wrong. This is a comedy which makes one laugh in surprise when one isn't recoiling at the behavior of its antihero, an intelligent reminder that denizens of the Third World are not only quite capable of intellectual sophistication, thank you very much, but also of teaching those who would look down upon them a thing or two. Chignac's take-no-prisoners approach keeps one on edge throughout, even while laughing at some pretty comic situations, but be prepared to go to some very dark places. The film's ending is uncompromising, as far away from Hollywood as one can get. I actually gasped. In addition to Martina, whose subservience to Alex's sexual demands doesn't excuse him of rape, Alex uses the young Mamadou (Ali Monzana) as his personal errand boy and is kept tantalized by Dogni and others refusal to tell him just what The Outcast (Amara Condé) was outcast for. The local Chief (Thierno Ndiaye, "Karmen Gei") will only assist if Alex promises to look into the military pension he has never received, a reminder of the French Government's heinous treatment of soldiers conscripted from African nations. French horror film icon Philippe Nahon ("Haute Tension," "Calvaire") makes a brief but distinctive appearance as an enlightened man passing through who refuses to help Alex for very valid reasons. Chignac makes an interesting choice with Alex's eventual saviors. "The time of the Charity Fête Is Over" is an awkward title for a very powerful film. It's not only potent food for thought, but takes its audience to a corner of the world few experience.

Amir Bar-Lev wrote and directed this tome that tells the too-often occurring story of a soldier accidentally killed by his comrades during battle. The director makes it an in-your-face documentary that uses the fame of its title character to bring to light the cover-up of a killing that should have never happened. The real hero of “The Tillman Story” is his mother, Dannie. The lady was presented, after the initial investigation into Pat’s death, with over three thousand pages of heavily censored documents that supposedly gave the real facts about the incident. The sheer volume of information would have defeated a lesser person but Dannie Tillman proved to be as strong willed as her son and tenaciously worked to prove how Pat was really killed. The cover up, says the filmmaker, went to the highest levels with then Secretary of Defense Donald Rumsfeld and his high ranking generals called before a house committee investigating the Tillman killing. These men denied any knowledge of how Pat died and, before the committee, said “I don’t recall” 82 times when questioned. Bar-Lev makes a good case that a major cover-up took place. “The Tillman Story” is a sad, melancholy film operating on many levels. The untimely death of a brave young man who gave up a multi-million dollar pro football career to serve his country; the frustrating investigation by Dannie to put to rest her son; and, the affect that Pat Tillman’s death had on so many.