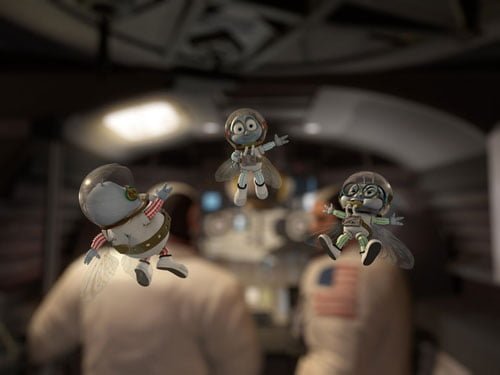 Having grown up hearing former Ace Grandpa (voice of Christopher Lloyd, "Back to the Future") tell the tale of how he saved Amelia Earhart on her solo flight across the Atlantic, young fly Nat (voice of Trevor Gagnon, "Big Fish") dreams about the Apollo 11 moon mission, and so Nat convinces his best buddies Scooter (voice of David Gore) and I.Q. (voice of Philip Bolden, "Are We Done Yet?") to disobey their moms and sneak out one night in order to stow away on the first manned flight in "Fly Me to the Moon."

Director Ben Stassen ("Wild Safari 3D") brings his 3D experience to a thoroughly inane and padded script by Domonic Paris ("Last Rites") for an animation that will prove an endurance test to all but four year olds and even they will most likely be bored to tears by an extraneous subplot about Russian spies trying to sabotage the mission. The film opens with a lovely shot of the water where the junkyard where a fly neighborhood makes its home (in what appear to be abandoned doll houses, although the film rarely converts junk into fly translatable usefulness). A dragonfly hovers sideways then darts forward until you believe it will rest upon your nose. Nothing about the film offers much diversion after this point. There is a lot made of Scooter's obesity followed by a pointless birthday party for Grandad with unappetizing fare like turds and baby maggots that need tending. Some attendees look like 70's era black characters sporting 'fros, perhaps to lend some 1969 'realism.' Perhaps because the moon flight itself wasn't deemed interesting enough (the boys get caught by an astronaut in a tube, then make their way out, then fix a faulty wiring problem), we keep getting sidetracked to Russia where an apoplectic Poopchev (voice of Ed Begley Jr., "Pineapple Express") wants the mission thwarted. Spy Yegor (voice of Tim Curry, "The Wild Thornberrys Movie") is dispatched - mistakenly to Cape Canaveral - but Grandpa's old amour Nadia (voice of Nicollette Sheridan, TV's "Desperate Housewives") is present and decides to warn him. There is, of course, no rhyme nor reason as to how these flies can move from Russia to Florida or how Grandpa and company make it from Houston to Florida. Of course, when Nat and company need spacesuits, IQ merely shows up with fly-sized ones as there is little use for imaginative logic here. By the time the real Buzz Aldrin makes an appearance to salute the heroes of the space age, it seems an embarrassment that he should be aligned with a project such as this one. "Fly Me to the Moon's" idea of high hilarity is to have Nat's mom (voiced by Kelly Ripa, TV's "Regis and Kelly") fret 'Oh my lord of the flies,' then feel the need to repeat the 'joke.'