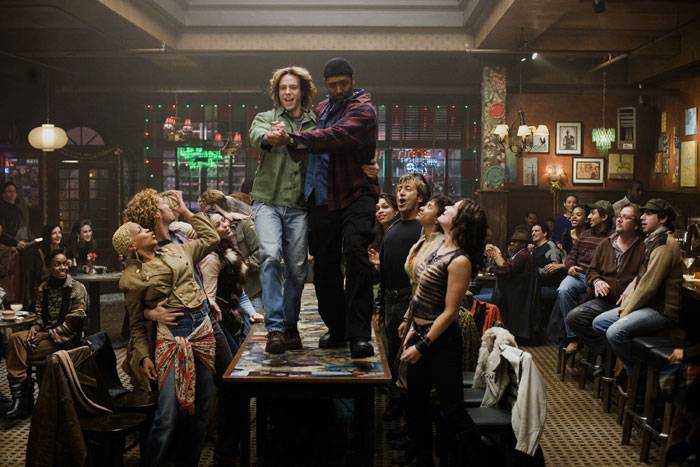 Director Chris Columbus ("Harry Potter and the Chamber of Secrets") and coscreenwriter Steve Chbosky have adapted Jonathan Larson's Pulitzer Prize and Tony Award winning rock musical, itself based on Puccini's opera La Bohème, for the big screen. Eight artists living in New York's East Village love for better and for worse and struggle with sickness and the economic strain of paying their "Rent."

This is a most unusual adaptation in that it features six of the original eight starring Broadway cast members returning to reprise their roles ten years later in the movie. I'll be right up front and admit that I have never seen the musical and so cannot comment upon additions, omissions and changes to the stage show, but what I can say is that it is easy to understand how this play made stars of its then unknowns. The cast is fabulous. "Rent" famously analyzes what constitutes a year of a life (yeah, one of the eight will die, just as the play's author didn't live to see his baby's premiere), beginning at 9 p.m. on Christmas Eve, 1989, and wrapping at 10 p.m. one year later. We first meet Mark Cohen (original Broadway cast member Anthony Rapp, "A Beautiful Mind"), a documentary filmmaker (a device which doubles in upon itself) alarmed that his reality is becoming more like fiction every day. He rooms with Roger Davis (original Broadway cast member Adam Pascal, "The School of Rock"), an ex-junkie rocker still grieving the loss of his girlfriend April to AIDS. Their former roommate Benjamin "Benny" Coffin III (original Broadway cast member Taye Diggs) has sold out and become a real estate developer under the tutelage of his wealthy father-in-law and former landlord. Although Benny told his friends they would never have to worry about their rent, he arrives on Christmas Eve to renegotiate the deal, making his promise contingent upon their quietly putting a stop to the protest performance piece planned by Mark's former girlfriend Maureen Johnson (Tony nominated original cast member Idina Menzel, who later won for "Wicked"). Mark and Roger have no such intentions, nor would it matter if they did, Maureen being a force of nature who left Mark for another woman, lawyer Joanne Jefferson (Tracie Thoms, "Brother to Brother," in the role originated by Fredi Walker). Meanwhile, a potential new romance is blooming for Roger, when the dancer downstairs, Mimi Marquez (Rosario Dawson, "Alexander," taking over for Daphne Rubin-Vega) slips in through the window looking for a light. There's one big problem, though - she's a user. Christmas morning brings a welcome surprise when Tom Collins (original Broadway cast member Jesse L. Martin, TV's "Law & Order") arrives at the Avenue A loft with gifts of food and vodka to share. He's also got entertainment in the form of his new soul mate. Angel Schunard (original, Tony award winning cast member Wilson Jermaine Heredia, "Flawless") is a Village drag queen who rescued Tom after a mugging the night before. He/she's also a born entertainer and the sweetest creature you'd want to meet. Columbus, a commercial director of Hollywood product, shows surprising signs of life and style with his musical debut. "Rent" doesn't break any ground - it's a traditional musical - but it's briskly paced and visually fluid (cinematography by Stephen Goldblatt "Closer") and showcases each of its principals to his or her best advantage. The production design (Howard Cummings, "Secret Window") and art and set direction combine to create an insular world that defines its characters. The sets seem both real and ever so slightly artificial at the same time, a balance which acknowledges the material's roots while letting some outdoor air in. The cast is thoroughly engaging. Tony winning Heredia is a standout with his charismatic magnetism and Idina Menzel is his entertaining equal, the spice to his sugar. They enjoy the film's best solo numbers, Heredia's at his introduction and Menzel when she's the last to be introduced with her riot-provoking act in the film's midsection. Making a splashy entrance riding a motorcycle through her audience, Menzel bounds onto a stage rimmed with chain link face to protest the Cyberspace project which threatens the Avenue A lifestyle, accompanied by humorous prerecorded video of herself displayed on monitors behind her. Rosario Dawson is so integrated into this thickly woven fabric, one would never know she didn't' work with this group before. She's got the goods to sing and dance and kudos must be given to the bikini wax that allows Goldblatt's camera up close and personal access for her Cat Scratch club dance. The film's peak comes with the exuberantly staged La Vie Boheme number in which the entire cast strut their stuff. "Rent" cannot quite keep up its energy for its final third, which deals with disconnects and death. Roger's abbreviated trip out west seems pointless, despite the actor's own charm, and Mark's unspooling of his documentary at film's end, the making of which he quit a lucrative sellout job for (Sarah Silverman plays his boss in a bit part that allows her nothing but recognition), is anticlimactic, a home movie with none of the social commentary he was supposedly aiming for. Even in its weakest part, though, "Rent" pushes across its themes of friendship, love and loyalty.