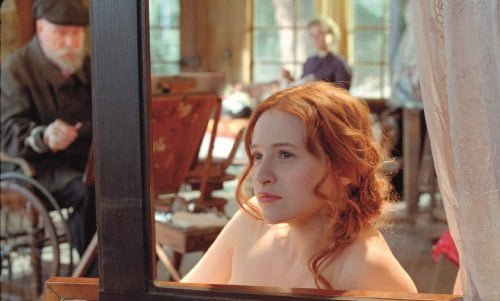 In the waning years of his life, Auguste Renoir (Michel Bouquet, "Tous les Matins du Monde") is gifted with a new artist's model, Andrée Heuschling (Christa Theret), sent to him by his wife who has since died. When his middle son, Jean (Vincent Rottiers), returns from the front to Collettes, the family home on the French Riviera, to convalesce, the aimless young man is also enchanted by the red-haired woman who wants to act in the cinema in "Renoir."

There are three things which distinguish writer/director Gilles Bourdos' rumination of the passing of the Renoir artistic legacy from the master painter to his filmmaking son. The first should be no surprise - cinematographer Mark Ping Bing Lee ("Flight of the Red Balloon") and the director have meticulously composed their frames, their color palettes and used natural light to plunge us into a world seen through a painter's eyes. Mostly photographed in medium and long shots, the natural beauty of nature and the women who surrounded Auguste are lyrical. Secondly, Bourdos hired art forger Guy Ribes to be the 'hands' of the painter, and so "Renoir" is a real look at art being created, showing us how nudes can be conjured out of a few rounded lines, how a stroke of brown paint defines a woman's curves. Thirdly is the performance of Bouquet, who shows us the artist as a man almost enslaved by his love of beauty, a man suffering from a debilitating illness that required him to have his brushes tied to his hands yet whose joy in creation is palpable (when his doctor asks what he will do when he can no longer use his hands, Renoir replies 'I'll paint with my dick'). Bouquet convinces us that we understand this man and feel the loss of his passing, the slipping away of a way of life. Then there is Andrée aka Dedée, 'a girl from out of nowhere sent by a dead woman.' Theret, with her coppery hair and amber orange suit, is a modern girl and a force of life. The actress is, of course, lovely to look at, but she also exerts a will, a sense that Andrée is out to shape her destiny quite in contrast to Auguste's philosophy of taking on life like a cork in a stream. She has a vibrant presence. Unfortunately, this is not the case with Rottiers, whose Jean Renoir is a bit of a stiff. Challenged by Andrée as to what his goal in life is, Jean realizes he doesn't really have one and although the filmmakers give us glimpses into his exposure to cinema (he builds a projector, he buys a film from a junk collector and screens it), it's younger brother Coco (Thomas Doret, "The Kid with a Bike") who is seen experimenting with shadow and light. We only hear about Auguste's eldest son Pierre, who lost an arm in the war, but the three remaining men are surrounded by women both present and past. Michèle Gleizer ("The Women on the Sixth Floor") plays Renoir's wife, come back to comfort him in his dreams. There is talk throughout of Auguste's last model, Gabrielle (Romane Bohringer, "All About Actresses), who 'grew too close' to the artist and who appears at film's end for a visit. There is the cook and the maids, always bustling, the kitchen a still life of game and garden bounty. Hélène Babu ("Leaving") is notable as Odette, a former model turned housekeeper, one in a line of many. Bourdos wrote his script using Jean's memoirs, but it is only the father whose spirit is felt (the son married dad's last model, casting her in six films). Alexandre Desplat's ("Argo," "Zero Dark Thirty") score is lovely when simple piano, but cliched when violins are used to increase urgency. Still, the film is beautiful and Bouquet's work memorable.