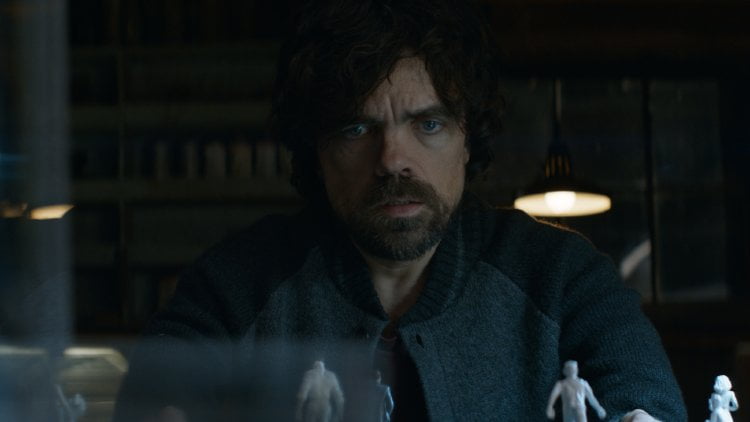 Sam Bloom (Peter Dinklage) lost his brother, Dash (Matt Ellis), in a deadly car accident and has been haunted by Dash’s last words, which he cannot remember. Gifted scientist Gordon Dunn (Martin Donovan) has invented a machine that permits an individual to record and play back memories. The inventor’s mysterious death leads Sam to get to the bottom of both riddles in “Rememory.”

Sam Bloom (Peter Dinklage, HBO's 'Game of Thrones') is singing along with his rocker brother Dash (Matt Ellis) as they head towards their favorite fishing hole when everything changes in an instant, the fire from Dash's Zippo lighter the last moment of what would have been a good memory. His brother gone, Sam begins to follow the work of brilliant psychiatrist Gordon Dunn (Martin Donovan, " The Opposite of Sex") who has developed The Machine, a device capable of storing unfiltered memories on memory glass. When Dunn is murdered, Sam steals The Machine and pieces together test subject's memories to solve the case in "Rememory." Cowriter (with Mike Vukadinovich)/director Mark Palansky ("Penelope") had a great concept for his science fiction mystery-with-a-twist and a terrific actor in Dinklage, but even the film's committed star cannot sell some of the stilted dialogue he must utter. The plot also becomes unwieldy, bogged down by a suggestion of corporate malfeasance the filmmakers must address well after their film has come to its natural conclusion. Gregory Tripi’s unimaginative, dated electronic score denotes "Rememory" as a work far lesser than its ambitions. Sam is in the audience when Dunn describes his revolutionary new therapy concept. Life is a collection of memories he tells us, but our memories are distorted through time. His Machine records a person's memories as undistorted truth, the viewing of which he believes can lead to psychological breakthroughs. The concept obviously has dangerous implications which, surprisingly, Dunn has apparently not considered. We see a woman in the front row almost physically recoiling from the images Dunn presents, real recorded memories. Sam watches as Wendy (Evelyne Brochu, TV's 'Orphan Black') confronts Dunn after his talk, demanding her memories back. Later, we see Dunn in his office, watching his own memory of his family, when one of his test subjects, Todd (the late Anton Yelchin), barges in screaming 'You f&#%ed up my head!' The police will find him dead on the floor, bullet holes in the wall behind his desk, but none in his body. Sam goes to Dunn's home for his funeral reception, only to be told by his widow, Carolyn (Julia Ormond, "Smilla's Sense of Snow"), that she's sent everyone home. He charms her, introducing himself as James and presenting her with a bottle of whisky and a promise of his story about how Gordon saved his life. The two make an emotional connection, but Sam uses his entry to steal The Machine, going back to his model making shop to begin to try and connect the dots among the many stored memories. A WWII veteran is the starting point in a trail that will lead to a suicide, a man from Centex with insider information about Gordon's business partner Lawton (Henry Ian Cusick, TV's 'Lost,' 'The 100'), Wendy and the very distraught Todd. Along the way, Sam attempts to record his own memory of the night his brother died, the procedure's side effects causing him to hallucinate visions of Dash. Clearly, these unaltered HD memories are causing problems, yet the filmmakers instead focus on their murder mystery, even using the memories for last act healing. The memories themselves are oddly incorporated, initial ones accurately showing events from its holder's perspective, later ones including the rememberer in the scene which makes little sense. The main reason to see "Rememory" is Dinklage, the actor's easy charm effective for a character who takes on aliases to get to the truth. Ormond is also fine as the grieving widow coming to terms with how an earlier tragedy affected her marriage. In one of his last roles, Yelchin is confined by the PTSD which torments Todd. With some streamlining and tweaking, "Rememory" may have been something special, but as it stands it's not very satisfying despite Dinklage's best efforts. Grade:

Sophomore feature director, and co-scribe (with Mike Vukadinovich), Mark Palansky takes on an ambitious sci-fi project that may just be a bit too much to control. First is the overwhelming premise of the Rememory Machine – the abovementioned recorder of memories. Think about that for a minute: to have the ability to look back on all of your memories from your life. That, to me, is scary as hell. As said, Sam lost his brother with the mystery of his last words left unknown to the grieving model maker. He attends a lecture given by Gordon Dunn and is enthralled by the concept of the inventor’s machine. Then, Gordon Dunn is dead. This is where things branch off in different directions and characters along with a number of mysteries. Because there is more than one mystery – the key one being the circumstances of Dunn’s death/murder – it helps to have a scorecard to keep track of the suspects, their motives (real or not) and the other story lines. Sam, who, in his self-appointed murder investigation, has a motive for his actions involving the Rememory Machine and his late brother’s last words. But, his character, when introducing himself to the suspects and victims in his investigation of what appears to be a corporate conspiracy, gives pseudonyms for some unexplained reason. Through the slight of hand of writing, Sam insinuates his presence with Dunn’s widow, Carolyn (Julia Ormand), who happens to have the machine and a drawer full of people’s memories. Sam steals the machine and memories and uncovers a number of suspects. I will not go further as things get complicated. The idea of the Rememory Machine is intriguing and, in other more experienced hands could have been better executed. When a story trots out such maguffins as the evil corporate boss and you know it is a maggufin, it gives me pause. There is a gem of a sci-fi story buried here but, for now, we just see a glimmer of what could have been. It is good fodder for thought for sci-fi fans.