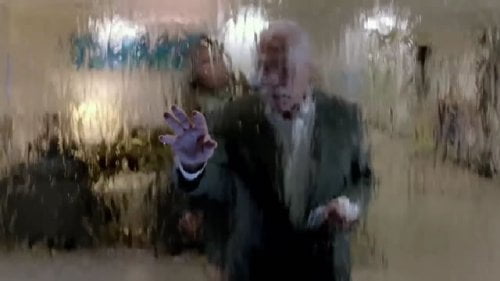 Zev (Christopher Plummer) is an old Auschwitz survivor spending his last years in a nursing home. He suffers from dementia but another resident, Max (Martin Landau), wheelchair bound, has an important mission for Zev. He gives him a packet of money, train tickets and a letter that instructs Zev, in great detail, to find the man responsible for the deaths of the families of the two men…and kill him in “Remember.”

Zev Gutman (Christopher Plummer, "Beginners") awakens and immediately begins calling for his wife, Ruth. An assisted living home aide has to remind him that she's recently passed away. Zev's dementia is getting worse, but Max Rosenbaum (Martin Landau) has written a letter than outlines their past so that he may enact revenge on the Auschwitz guard that destroyed the families Gutman is struggling to "Remember." Director Atom Egoyan, whose output since 1997's "The Sweet Hereafter" has been spotty at best, has much better success directing another's work, here first timer Benjamin August, that he did the first time he tried it with "The Devil's Knot." From his opening scene, in which he tips his hand to his twist with some sleight of hand that may only be recognized after the fact, Egoyan's "Memento" by way of "This Must Be the Place" exhibits a strong directorial hand from Christopher Plummer's dissolving determination to inspired art direction. That the reveal brands the film a lurid thriller in the Ira Levin vein may downgrade it for some while others may find it a disturbing, campy kick. On the sixth night of his wife's shiva, Zev, as instructed by Max, tells son Charles (Henry Czerny, "The A-Team") he's retiring early. The old man takes Max's thick envelope and slips out of the home to begin his quest to find Rudy Kurlander. With a distraught Charles having sent out alarms for his missing dad, Egoyan lays on the suspense as Zev slips through various checkpoints - an F.B.I. background check while purchasing a Glock, a Canadian border stop - and as each of the four Kurlanders Max has identified is found. One after another turns out the wrong man, although the third's son, a rural alcoholic cop (Dean Norris, TV's 'Breaking Bad,' 'Under the Dome'), proves pretty chilling, beginning Egoyan's slide into Nazi horror. Zev's travels take him from the artificial comforts of 'home' to generic hotel rooms, regional bus lines, nondescript ranch houses, a tacked together farmhouse and, finally, a pristine log house seemingly transplanted from the Tyrolean Alps to the American southwest. Music comes in the form of Zev's preferred piano pieces, from Mendelssohn to Wagner. Supporting characters along the way range from such stars as "Wings of Desire's" Bruno Ganz as the first Kurlander to "Hellions'" Peter DaCunha as a young boy who befriends the addled Zev on a bus. Jane Spidell keeps us guessing as the uber-Aryan Kristen, daughter of the last Kurlander on Zev's list (Jürgen Prochnow, "Das Boot"). But it is Plummer who fuels this journey, tapping decreasing reserves as his mind and body fail him. Grade:

Director Atom Egoyan fell off of my cinematic radar a while back (“Where the Truth Lies (2005)” was one of those memorable glitches). Because of this, I was a bit skeptical going into “Remember,” but should not have been. First and foremost is the remarkable performance by Christopher Plummer, an actor who continues to amaze in his performance as the befuddled Zev. There is an element of “Memento” in “Remember” as Zev lapses into his dementia, but his mission is always harkened back by Max’s instructions to “read the letter.” This always puts Zev back on track in the quest to find the murderer, named Rudy Kurlander. There is only one problem: the Simon Wiesenthal Center has identified four Germans, from the war, with the name Rudy Kurlander. This journey is the center of the screenplay by newcomer Benjamin August and it is a promising debut for the scribe. I do not want to give up anything about Zev’s trek at Max’s behest but will say I did not see it coming. The big twist ending, to me, seemed more a device to wrap things up quickly than a well thought out finale. This, I think, is a newcomer foible. The rest of the story works quite well. Supporting cast is solid with the abovementioned Martin Landau the puppet master of the story and Jurgen Prochnow, Bruno Ganz and Heinz Lieven as three of the Rudys. Dean Norris, as John Kurlander, the son of the deceased fourth Rudy, is terrifying as an uber anti-Semite who suddenly realizes that he has a Jew in his home when Zev asks questions about his late father. “Remember” is a well crafted film that tells a very different story of revenge cloaked in an unusual road trip.