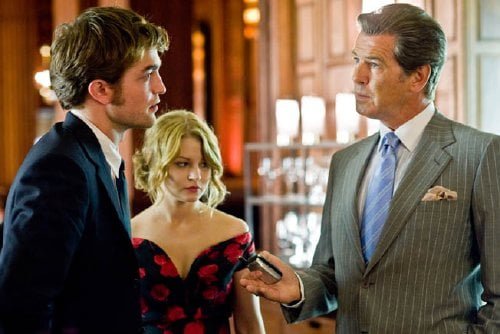 Tyler Hawkins (Robert Pattinson, "Twilight") is about to turn the same age his older brother was when he killed himself shortly after joining their father's law firm six years earlier. Approaching 22, Tyler is adrift, working a nowhere job, auditing college classes and living in a dumpy apartment. Tyler is mad at the world, which gets him into a lot of scrapes, and all his anger is targeted at his Wall St. heavyweight dad Charles Hawkins (Pierce Brosnan, "The Ghost Writer"), until he finds love on a dare in "Remember Me."

It appears as if screenwriter Will Fetters was trying to update "Love Story" with a distinctly different New York City twist - no "Skating in Central Park" here - and what he's come up with is melodrama with a capital 'M' and a climatic shock many will find in poor taste. That said, director Allen Coulter ("Hollywoodland," HBO's "The Sopranos") makes much of this work. "Twilight" fans going for a Pattinson fix are sure to be swooning (although the actor appears to be taking a page from Johnny Depp here, appearing through at least half of the film with a beaten up face or five o'clock shadow), but truth be told Pattinson has a lot more chemistry with young Ruby Jerins (SHOtime's "Nurse Jackie"), who plays his eleven year-old sister, than love interest Emilie de Ravin (TV's "Lost"), and Coulter could have cut a number of shots of the actor staring broodily out windows. The film begins with a flashback which shows the eleven year old Ally Craig witnessing her mother's murder by muggers on the New York subway, before segueing over to Tyler and his dysfunctional family. Mom Diane (Lena Olin, "The Reader") has remarried and lives with her husband Les (Gregory Jbara) and her daughter from her first marriage Caroline. Tyler's devoted to Caroline, going out of his way to pick her up from school, where she is teased to the point of bullying for being different (she's a very talented artist who tends to space out in class). Besides his constantly simmering anger at dad for what happened to his brother, Tyler is incensed that his sister thinks her father doesn't like her because she never sees him. With a bit of topical release date serendipity, Caroline chastises her brother for his chain smoking at Central Park's Alice in Wonderland statue. One night, after being coaxed out by his boozy roommate Aidan (Tate Ellington), Tyler gets involved in a violent altercation. When he objects to the police that they are cuffing the victims as well as the perpetrators, Sgt. Neil Craig (Chris Cooper, "Breach") roughs him up and hauls he and Aidan in as well. Then Aidan notices Craig dropping his daughter, Ally, off at school and dares Tyler to talk to her - after all, what better revenge than going after the cop's daughter. While, "Love Story" wasn't based on a dare (an overworked romantic comedy cliche), the privileged son of an affluent Harvard Law alumni defies his father by bringing home a blue collar girl. "Remember Me" turns some of the details on their heads (when Craig finds out his daughter is staying with Tyler, he shows up to teach him another lesson - 'What are you taking a vacation in Coach before returning to First Class?!'), but it follows the same general path. Of course, when Ally hears the truth, it's an excuse to throw a wrench into the relationship before repairing it with yet another drama (the bullying of Caroline steps to a higher level just when Tyler's too distracted to support her). The film keeps flipping between scenes that work and those that are over and under-played. Besides Caroline, Pattinson has a few good scenes with Kate Burton who plays his dad's long time assistant Janine, one of those employees who has become part of the family over time. Yet when Tyler enters his dad's law firm, the hatred radiated by Tricia Paoluccio's receptionist is overblown as are Pattinson's reactions to her. Cooper is always believable, whether working with Pattinson or de Ravin. De Ravin has interesting screen presence, sometimes stunning, most of the time kind of average looking, making her character seem like a real person even when ordering her dessert before her entree (in service to the film's underlying message about enjoying life while you can, which could also extend to Tyler's smoking habit). But de Ravin and Pattinson together, which should be the heart of this movie, always seem slightly off. There is no real passionate letting go between the two. Brosnan is interesting as Charles, although his Bronx by way of Ireland accent is strange and too street for the position he has attained. Pattinson has a trio of escalating bursts of violent rage - that initial street fight, an epic emotional tantrum in dad's boardroom complete with audience and a response to Caroline's taunting classmate (Peyton Roi List, "27 Dresses") that would surely have landed him in deeper than destruction of school property. While the middle one teeters on the verge of being forced, the last, while excessive, is made believable because Pattinson's made us believe in just how much he loves his little sister. If the actor took hits for "Little Ashes" and "New Moon," this one at least shows he's capable of something other than "Twilight," even if Coulter lets the melodrama bubble over. And then there's the climax which is just the ultimate in overkill, followed by a series of character codas which add little even when they make sense. "Remember Me" is just too overripe in the melodrama department for modern audiences, but it features some credible acting and a ten hanky weep for those in the mood.