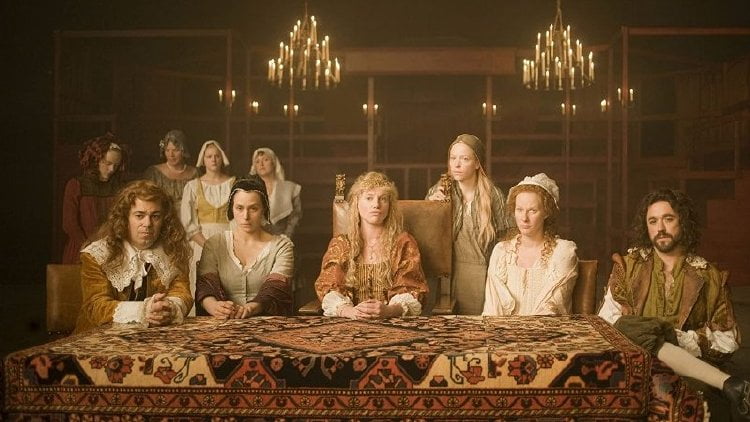 Writer/director Peter Greenaway ("The Cook, the Thief, His Wife & Her Lover") believes we have become a visually illiterate, text-based culture.  As his case study, he chooses what he claims is the fourth most celebrated painting in history (after Leonardo’s Mona Lisa and The Last Supper and Michelangelo’s painting of the Sistine Chapel ceiling), Rembrandt’s Night Watch, which Greenaway says is really “Rembrandt’s J’Accuse.”

Those who remember Greenaway’s unique filmography from the 80’s and 90’s will find the auteur’s interest in Dutch painting, explicit sex and violent death here as well as his use of picture in picture, text and numbers.  This 2008 documentary, recently released by MVD Entertainment Group on DVD, is a companion piece to his 2007 film “Nightwatching,” which used the same cast in a feature about Rembrandt’s painting his Night Watch.

Greenaway’s forensic study of what he calls a visual murder investigation and indictment is always fascinating and frequently hilarious, the director’s wit (he appears in a central box questioning such people as Rembrandt’s wife Saskia (Eva Birthistle, "Brooklyn")) so dry I found myself doing aural double takes (Saskia first remembers the night Rembrandt ‘was shot in the face.).  After telling us there have been 50 mysteries documented about the painting, Greenway tells us he will investigate 33 of them.  Plus one.

Number 1 is about the Dutch Militia pictured in the painting, but Greenaway gives us an entire history, telling us how the militia of their day were grouped by their weapon of choice and just loved to be painted.  As he continues, he will point out the importance of a pointed gun and every single figure in the painting, frequently cutting to staged recreations featuring Rembrandt (Martin Freeman), his wife, his first, scandalous mistress Geertje (Jodhi May, "A Quiet Passion") and second mistress Hendrickje (Emily Holmes).  He will reference other Rembrandt works, illustrating how they inform this one.  His history of Amsterdam at the time will also conclude that Rembrandt’s Night Watch essentially destroyed his career, his painted accusers ruining him.

Throughout the film, a running tally of all the important people, from Pablo Picasso to Ingmar Bergman, runs across the screen in decorative font.  When Greenaway isn’t cracking us up investigating one figure’s increasing penis size or talking about transvestite dwarves, he does it by visual imagery, at one point ‘placing’ his own head atop the painted image of a plated, feathered fowl.

“Rembrandt’s J’Accuse” may wander a little too deeply into he woods at times, but Greenaway’s puckish art history lesson is so much fun, I it screams out for an entire series.

Have you ever given any thought to Rembrandt van Rijn’s most famous painting, “The Night Watch”? I have to admit, I have not. That is, until I saw Peter Greenaway’s extensive 2008 analysis of that work of art and learned of the 50 mysteries it contains in “Rembrandt’s J’Accuse.”

I have appreciated the visual acuity that director Greenaway has brought to his films. Just take a look at “The Cook, The Thief, His Wife & Her Lover (1989)” and “Prospero’s Books (1991)” and you will gain an understanding of his keen eye and his ability to see beyond our own world.

“Rembrandt’s J’Accuse” is Greenaway’s critique on our visual illiteracy and uses the world’s fourth most popular painting – after Leonardo DaVinci’s “Mona Lisa (#1), his “The Last Supper (#2)” and Michelangelo’s Sistine Chapel ceiling (#3) – to make a case for murder, conspiracy and the motivations of the 34 people depicted – 16 soldiers, 16 men, 2 women – and a dog.

Of the 50 mysteries Greenaway says are contained in “The Night Watch,” the auteur announces that he will delve into 33 of them, with the 34th being the most significant. He then does just that as he dissects each, grouping them into categories – The Location, The Event, The Timing, The Italian Connection, The Commissioners, The Man in Black, The Cutoff, The Two Women and more are brought to light and the meaning of the work critically analyzed.

There is so much to visually take in and, with Greenaway’s thorough and oft amusing critique of the work, I think I am going to have to give it a second watch just to sort out the mysteries and be intelligently entertained and informed once again. By the way, I actually did see “The Night Watch” at Amsterdam’s Rijksmuseum many years ago and, yes, it is pretty cool, but who knew the mysteries? Peter Greenaway, that's who.