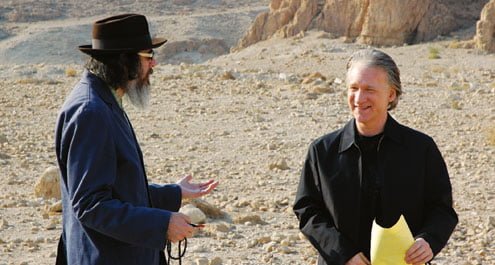 Irreverent comedian Bill Maher ("Politically Incorrect") travels to Israel, England, Amsterdam and all around the U.S.A. to talk to people about organized religion and ask the blunt questions that may just make them all look "Religulous."

"Religulous" is categorized as a documentary, but it is less of the informational variety than it is a global stand up act powered by interviews of four types - those whose subjects hang themselves with their own rope (Senator Mark Pryor, Democrat, Arkansas; Rabbi Yisroel Dovid Weiss, Anti-Zionist), those on Maher's wavelength (jovial Father Reginald Foster, Senior Vatican Scholar), the agreeably earnest made amusing with various cut-ins (the Creation Museum's Ken Ham) and those who don't realize Maher's taking the piss out of them (Growing in Grace Ministry's Jose Luis de Jesus Miranda, the Cannabis Ministry's Ferre van Beveren). Maher leans mostly on the religion of his own upbringing, the Catholic Church, and steers clear on those who do not fight in the name of God, like Buddhism, and while his amused analyses of the basic tenets of multiple faiths are, indeed, funny and true, he'll be mostly singing to the choir of doubters he claims makes up America's largest minority. Standing in Megiddo, Maher tells us this is, according to the Bible, where the world will end, but proclaims this is self-fulfilling prophecy, one we will achieve via pollution or war. Religion is detrimental to humanity, he says, the selling of an invisible product, a road to corruption, points he sets out to prove. His first stop is Raleigh's Truckers Chapel, where one congregant tells him we have proof of the Virgin Birth because DNA testing showed that Jesus was a man with a woman's blood in his veins(!) and another walks out saying Maher is disrespecting his beliefs. In one of his many witty observations, Maher sums up the experience saying 'It's like the Lotto - you can't be saved if you don't play.' He visits the corruption issue by taking on Evangelical TV minister's fund-raising ads ('We have people on Welfare pledging $1,000 - and paying it!') and visiting the very expensively dressed Jose Luis de Jesus Miranda, the self-professed Second Coming. One of Maher's most compelling arguments is that many basic Christian beliefs are not found in the Bible, the Virgin Birth only recounted in two Testaments and condemnation of a gay lifestyle non-existent (Maher has fun with formerly gay Pastor John Westcott of the Exchange Ministries, now married to a former Lesbian). Maher's almost silenced by the actor who plays Jesus at Orlando's Holy Land Experience who counters his monolithic threesome by describing God as water, which can appear as steam, solid or liquid, but then offers a cagey comparison of Jesus's story to the Egyptian god Horus. Playing to his "Politically Incorrect" background, Maher throws in a non-Biblical reference by throwing in a clip of Republican Presidential nominee John McCain declaring the U.S. Constitution founded the country as a Christian nation, followed by anti-Christian quotes from Founding Fathers Franklin, Jefferson and Adams. Science vs. religion is tackled by hearing out a creationist, then visiting Father George V. Coyne, a Vatican astronomer whom Maher compares to a Gay Republican. One can only imagine's Maher's distress that his film was completed before McCain chose his running mate. We see director Larry Charles's "Borat" experience coming through in a sequence that has Maher disguised as a homeless man at London's Hyde Park Speakers Corner, shouting out Scientology beliefs without identifying them. He's laughed at and crowned with balloon animals. In Salt Lake City, he's moved off the property of the Mormon Tabernacle (the only other place he is removed from is the Vatican), then speaks with two ex-Mormons, but this sequence is too brief and the Scientologists and Mormons, as ripe as any for comic analysis, received a better roasting from South Park episodes than Maher gives here. Instead he makes non-sequitur side trips to Dorset's Giant of Cerne and Amsterdam's Cannibis Ministry. Having visited the Al-Aqsa Mosque, where Islam has laid claim to Jewish Holy Ground, Maher segues back to his End of Days self-fulfilling prophecy with The Hague's Parliament Member Geert Wilders damning Islam as a warlike group intent on killing Infidels. Maher himself notes that Muslims who protest this belief only do so to outsiders, his most radical statement. "Religulous" is shot economically with no more than two cameras on each location - we frequently have the director and a cameraman (and the director as cameraman) in Maher's shot. Film clips from Biblical epics and Church films are used to make sarcastic points, as are soundtrack choices like "Crazy," "I Ain't Superstitious," "Party In My Pants" and "Jesus Is Just Alright." "Religulous" will give the religiously irreverent many laughs, but it runs out of steam in its third act. Maher wraps telling us 'Grow up or die,' but his message will infuriate those it is meant for.