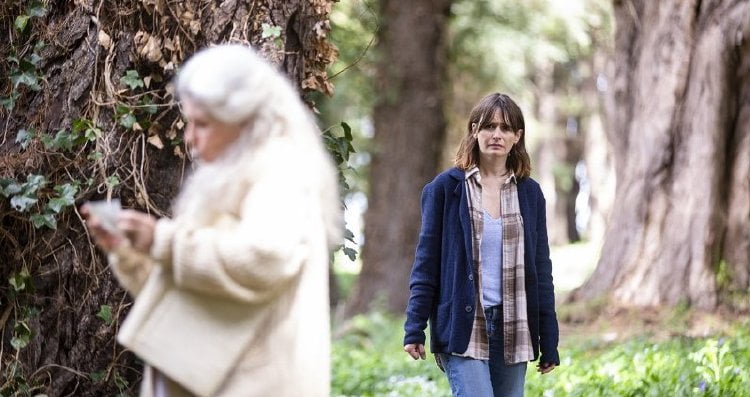 An old claw foot tub overflows.  A naked old woman stands staring at a blinking Christmas tree while, out of the corner of our eye, we see a shadowy figure rise out of an armchair.  In Melbourne, Kay (Emily Mortimer) gets a call that her mother hasn’t been seen in several days.  Kay and her daughter Sam (Bella Heathcote, "Dark Shadows") rush to their woodsy family home where the only signs of Edna (Robyn Nevin, "The Castle") are the post-it notes of an Alzheimer’s sufferer in “Relic.”

Cowriter (with Christian White)/director Natalie Erika James makes her feature debut with a haunted house allegory that reflects both upon the pain of losing a living loved one and the horror of recognizing our own mortality in a parent’s physical decay.  Beginning as a missing person mystery, James mutates her movie into supernatural horror.  The latter half of the film is patchier than the first, some elements too ill defined to have much effect, but its final scene lands with an emotional punch.

From the get go, there’s something a bit off about Kay’s response to her mother’s disappearance, a remove which we begin to realize is guilt.  She and Sam spend their time cleaning and organizing clutter when they’re not out in the woods searching for Edna.  Kay has a strong reaction to a run down wooden cabin on the property, one which invades her sleep in the form of a nightmare featuring an emaciated corpse.  The next morning she finds Edna barefoot in the kitchen, unable or unwilling to say just where she has been for days on end.

But even before Edna’s reappearance, Kay and Sam are unsettled by her house with its black mold stains and strange noises emanating from the walls.  We wonder why Kay seems taken aback by the sight of a blanket draped armchair.  Later we see her move it back into the divots created by its feet in the rug.  ‘I think she was scared,’ Kay tells Sam, noting how her mother thought a stranger was coming into her house, leaving doors open and moving things.  Once Edna’s back, we’ll see that shadowy stranger standing behind an oblivious Kay.  We’ll also learn her great grandfather used to live in that cabin and the stained glass window in Edna’s front door, now sporting black mold, came from that cabin.

James has created opposing forces in mother and daughter, Kay traveling back to Melbourne to look into assisted living while Sam stays behind and offers to move in with Edna.  These emotions will reverse as each has different experiences with the increasingly volatile Edna.  Mortimer’s guarded performance adds greatly to the film’s mystery, her expressions of love for her mother, when they come, all the deeper for it.  Heathcote’s more simplistic rendering of Sam is less effective.  Nevin, whether carving Edna’s symbolic candles or muttering to herself (?), is more eerie than sympathetic.

James’s haunted house metaphor doesn’t really work because of the way she’s chosen to employ it in the film’s third act, but her body horror catches us by surprise, not horrific at all in what it finally reveals.  “Relic” attempts something different and if it doesn’t entirely succeed as horror it does move us.