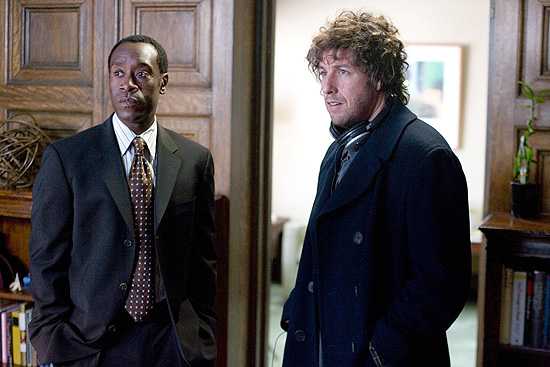 Charlie Fineman (Adam Sandler, "Click") has shut down from life after losing his family on 9/11, but when his successful old college roommate Alan Johnson (Don Cheadle, "Hotel Rwanda") runs into him and is shocked by the changes he sees Charlie allows his old friend in - as long as they stay in the emotional territory of their old school days in writer/director Mike Binder's ("The Upside of Anger") "Reign Over Me."

I have always been an unabashed Adam Sandler fan even while admitting some of his films ("Little Nicky") are just plain awful, but me boy's done me proud in Mike Binder's perceptive post-9/11 therapy film. If only the filmmakers had resisted the urge to make a condescending and sentimental romantic pairing at the end of their movie, "Reign Over Me" may have been just about perfect. Alan Johnson has a wonderful wife (Jada Pinkett Smith, "Collateral") and two lovely daughters and a very successful New York dental practice but he is not a happy man. He cannot connect with Janeanne and allows her to rope him into her own pursuits that he does not enjoy and he resents doing the unnecessary cosmetic dental work his wealthy patients demand. Alan tries to find a lifeline in Angela Oakhurst (Liv Tyler, "Jersey Girl"), a young therapist in his building, but she rightly refuses to dispense advice on the street. To make matters worse, the handsome dentist's partners are demanding he 'fix' a situation not of his making when he is accused of sexual harassment by the stunning Donna Remar (Saffron Burrows, "Frida," "Troy"), a disturbed woman who booked an appointment in hopes of orally pleasuring him, a proposition Alan immediately refused. When Alan spies Charlie scootering down a city street, he desperately tries to gain the man's attention, but Charlie's headphones block out his shouts. He tells Janeanne about the encounter, then runs into the man again, this time on foot, and is perplexed when his old friend doesn't seem to recognize him. But Charlie, raggedy haired and wrinkled, smilingly accepts his old friend, taking him on a scooter slalom of East Village streets and inviting him into his home for a game of Colossus (what he tells Alan he's been doing lately, as if it were reality) and a musical jam session. Alan delights in his new playmate and is initially indulged by Janeanne, especially given Charlie's tragic circumstances. When Alan discovers just how damaged Charlie is, exploding into violent, paranoid rages when his family life is mentioned, he cloaks his capering as a cause, perhaps even to himself, but when Charlie finally acknowledges he may have a problem Alan's good intentions plunge Charlie into court mandated circumstances. Sandler, who looks uncannily like Bob Dylan here (quick, someone sign him up for a biopic - he has the musical chops), makes smart choices in this performance, giving us a shattered man who represses his memories by acting like the man he was before they happened. He's an irresponsible, amusement chasing college kid who only shows the cracks in his armor with his constant cycle of kitchen remodeling and aggressive demands that guests remove their shoes before stepping onto his carpet. He is enabled by his landlady, who keeps the outside world, including his former in-laws Ginger (Melinda Dillon, "Close Encounters of the Third Kind") and Jonathan Timpleman (Robert Klein, "How to Lose a Guy in 10 Days"), at bay. When Alan innocently brings up loss of family or dental practice, Charlie reacts violently. Cheadle is also very good here, an uptight bundle of responsibility who relaxes in Charlie's company. When Charlie's eventually tells his 'story' about the wife who asked for nothing and who adored him, Cheadle lets a dawning realization about his own marriage wash down over his face. With the character of Charlie, Binder examines the many faces of grief and how people inadvertently try to force their own brand of it on others. What one person perceives as enablement, another may more rightly see as giving a man time to heal. The Timplemans, especially Ginger, need to share their grief and cannot understand their son-in-law's rejection. A wise judge (Donald Sutherland ("Pride & Prejudice," "Beerfest") is used to bridge the gap. Sutherland is quite effective as the benevolent authority figure and Tyler is surprisingly authentic as his predecessor in nudging Charlie along the right path. All the supporting players are good here, from Dillon's insistent mother-in-law, sympathetic because of her own dreadful loss, to Alan's hilariously audacious receptionist Melanie (Paula Newsome, "Guess Who," "Little Miss Sunshine"). Binder cast himself as Charlie's shunned friend and financial manager Bryan Sugarman who protects Fineman from a distance. The city itself is also a character, with the motorized scooter that symbolizes freedom of a different sort to both men the perfect platform for some beautiful movement within it and Russ T. Alsobrook's digital camerwork is up to the task both day and night. The film's soundtrack is integral to its characters, with tunes from Bruce Springsteen and The Pretenders commenting on interior lives while The Who's "Love, Reign O'er Me" provides the title. It's March, so why are we gifted with such a good film? Hopefully "Reign Over Me" will be remembered for much, particularly Sandler's thoughtful performance, later in the year.