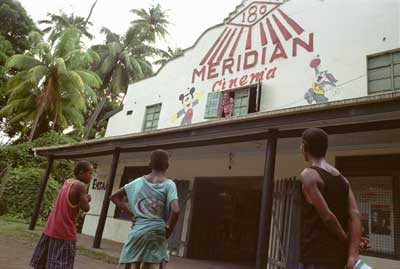 Indie film “guru” John Pierson helped launch such filmmaking careers as Spike Lee (“Do the Right Thing”) and Kevin Smith (“Chasing Amy”), authored the celebrated book, Spike, Mike, Slackers & Dykes and, with his wife Janet, hosted the IFC TV show, “Split Screen.” One episode of their show was about John’s journey to Fiji to check out the most remote cinema in the world. It was that show prompted Pierson to pack up his family and ship out to Fiji to run the theater, the 180 Meridian Cinema, for a year and show free movies to the locals in “Reel Paradise.”

When independent film producer John Pierson (author of "Spike, Mike, Slackers and Dikes") needed an idea for his television series "Split Screen," he traveled to the world's most remote movie theater, the 180 Meridian Cinema on the Fijian island of Taveuno. That bred yet another idea. He would buy the theater and do his own version of "The Mosquito Coast," moving his family to Fiji to show free films to the natives for one year. The Piersons would be in "Reel Paradise." This documentary sounded extremely promising for several reasons - as a look into how cinema translates globally, especially in the Third World, as a family of New Yorkers transplanted for one year and as the latest doc to be directed by Steve James of "Hoop Dreams" and "Stevie" fame. But its scattershot structure makes it disappointing and its preeminent focus on the social problems the Piersons encounter grows tiresome. Above all, it has too few reels and too little paradise. John and Janet Pierson's background, as presented in the film's early goings, actually sounds like better fodder for a documentary than this one, singular year. They met while working at Film Forum and Janet is quite open about not liking John initially, but before long they were married. The couple, who according to Janet have spent much of their married life in the backs of theaters watching films, even ran Buster Keaton's "Seven Chances" at their wedding. The Piersons now have two kids, 16 year-old Georgia and 13 year-old Wyatt, and no one in the family seems particularly enthused about John's idea. It was also his idea to document their experience, although we are told only the last month of their stay was filmed. James includes some footage of Pierson's early visit, where the Fijians lapped up The Three Stooges' "Some More of Samoa," a short that contained every stereotype about their existence on the books, but the film's timeline is confusing - it certainly never seems as if we're only experiencing that last of twelve months. We hear that Fijians are lazy and expected to steal (the Piersons are robbed during one of their movie showings - lots of finger pointing, particularly between their suspected Australian landlord and their cook's drug-dealing husband, and ineffective police investigation ensue) and only the islands' Indians afforded movies before, but it's not clear if its only the Fijians attending the Piersons' free showings. It's also never made exactly clear what Pierson hopes to achieve by this experiment. Is this an anthropological study of cinema? A simple vacation? A mission from the multiplex? A hoped for hit documentary? The most profound things we learn about Fijian film preference is that outright slapstick works best and that Pierson books two "Hot Chicks" for every "Rabbit-Proof Fence." Thirteen year-old son Wyatt, accepted by the islanders, is dad's best and most vocal critic, advising him that "Apocalypse Now Redux" will bore and that "Jackass" will go over well (mom Janet comes off a bit nutty when she lectures Wyatt on the serious long term effects of watching Knoxville's opus). Too much time is spent on the ill-behaved Georgia, a bad influence on her friend Miriama who likes to play bad girl to the camera. Not enough time is given over to the American student filmmakers who arrive to show their films. Why are there here and how does the Fijian reception impact them? Who knows? It also seems suspiciously late in the game when the film's final chapters address the resistance to Pierson's project by the local Church, who play up a published remark of his that's akin to John Lennon's observation that the Beatles were more popular than Jesus. This would seem to have made a better jumping off point and is a prime example of the doc's jumbled timeline. The same applies to recurring mentions of Pierson's obsession with showing ten new films within a week that lasts throughout the film. "Reel Paradise" may have been an interesting project for those involved, but the film doesn't translate the experience. It's as if it got drunk on tropical island drinks and got its reels all out of order.

Filmmaker Steve James, who made the notable documentaries “Hoop Dreams” and “Stevie,” agreed to bring his crew to the Fijian island of Taveuni to chronicle the last moth of the Pierson’s year long sojourn in what, to many, is paradise. The film starts out with John planning a ten consecutive night marathon showing free movies, from “The Hot Chick” to Apocalypse Now Redux” to “Rabbit-Proof Fence,” to the island’s residents. I expected that the bulk of “Reel Paradise” would be about John’s ten-day schedule and all the trials and tribulations of doing so. This is the case, but only in part. The bulk of “Reel Paradise” centers on the Pierson family – dad John, mom Janet, 16-year old Georgia and 13-year old Wyatt – and their lives in Fiji. The focus of the film, which is touted as one man’s mission to provide free movies to the Fijians, is really about the day-to-day lives of a family that just happens to live in Fiji. Things like Georgia’s budding sexuality, Wyatt’s issues with acceptance at school and John’s bout with dengue fevers and his battles with the local priests make this more like a soap opera than a documentary about bringing movies to Fiji. Steve James does show the problems and pleasure in John’s mission but this is a sidebar to the Pierson family story. I found the 10 days of free films to be the intriguing part of “Reel Paradise” and the Piersons’ life to be something more interesting to them than to me. I understand that John Pierson is considered an icon in the indie film world but his mission is what intrigues me, not his family’s problems.