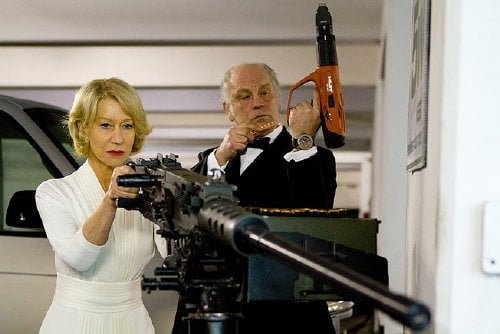 Frank Moses (Bruce Willis) is leading a simple life in a small town until one day, assassins come at him with such force his house isn't even left standing. But Frank is and after taking Sarah ("Weeds's" Mary-Louise Parker), the social security administrator he's been flirting with on the phone, hostage, he begins to round up his former C.I.A. team. They may be Retired, but they're Extremely Dangerous (RED).

"Red" has a smart marketing team behind it. They're pushing the delightful irony of "The Queen's" Helen Mirren spraying machine gun fire and the concept sounds like fun. But this graphic novel adapted for the screen by "Whiteout's" Erich Hoeber & Jon Hoeber and directed by Robert Schwentke ("Flightplan," "The Time Traveler's Wife") offers only a junk food high. There's fun to be had with Mirren's Victoria (and her surprising romance) and, even more so, John Malkovich's weird, LSD flashbacking Marvin Boggs, but the plot is pretty humdrum and the film ultimately forgettable. Frank's got three problems - 1) if he's being targeted, must mean his team is too; 2) he's got to convince the hysterical Sarah he's a good guy, the one she's known on the phone and, most of all, 3) he's got to figure out who is trying to kill him and why. Gathering his team - springing Joe Matheson (Morgan Freeman) from a nursing home, luring Boggs out of his bayou bomb shelter, dropping in on the housewifey Victoria - while evading further violence takes care of getting Sarah on board. As the plot unfolds before her, Sarah begins to get off on the excitement. Then it becomes pretty obvious it's an inside job led by the C.I.A.'s William Cooper (Karl Urban, 2009's "Star Trek"). Frank and Sarah infiltrate headquarters, then pay a visit to the Embassy of the Russian Federation's Ivan Simanov (Brian Cox) The whole team descends upon the home of U.S. dignitary Alexander Dunning (Richard Dreyfuss reprising his Dick Cheney role from "W") before their final stop - a fund raiser for Vice President Stanton (Julian McMahon, TV's "Nip/Tuck"). The cast appears to be having fun, but only Malkovich brings anything fresh to the table with his crazy like a fox performance (ironically, Malkovich was a late addition, replacing John C. Reilly). Parker and Urban at least have arcs which bring them from one point of view to its opposite, although Parker's initial screaming female grows a little irritating until she sees the light. As Urban's boss, Rebecca Pidgeon is wasted. Ernest Borgnine is amusing in a cameo as the C.I.A.'s record gatekeeper. Art directors help flesh out the characters in the way the establish their living spaces. Frank's simple ranch house is almost monastic. Matheson's cocooned in his quilted and rocking chaired home. Bogg's bomb shelter is a collection of looney items set beneath the sprawl of a bobby-trapped shack. Victoria's Colonial abode is a place of doilies, china and gleaming mahogany. The production team make use of cross country locations from the snowy west to steamy New Orleans and ultimately D.C., but the climactic hotel/parking garage setting is rather pedestrian. With Stallone's "The Expendables" and now this, 2010 appears to be the year of the launch of the geriatric actioner genre. But while "Red" would appear to have the classier credentials and kickier concept, I'd rather revisit Sly's team.