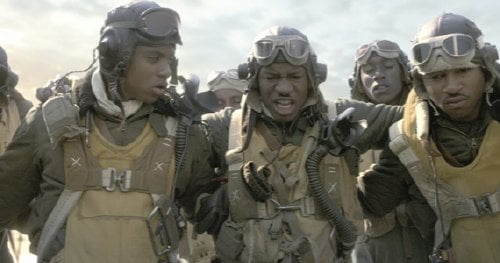 In 1941, the need for fighter and bomber pilots in the Army Air Corps increased dramatically as the United States prepared for war. Until then, no African-American had ever served as an officer and pilot, but that changed with the Tuskegee Airmen. The first Blacks recruited into the fledgling pilot training program went on to be one of the best fighter squadrons fighting in Europe and were affectionately known by the bomber crews they protected as the “Red Tails.”

In 1944, the only Black aviation pilot group in the U.S. Army Air Corps were still equipped with aging planes and tasked with fairly meaningless, non-combat missions, but in Washington D.C. Colonel A.J. Bullard (Terrence Howard, "Hustle & Flow") was pushing his men's agenda. When the men finally got a mission to escort bombers, their performance was so top notch that the white bombardiers who'd snubbed them had to admit they liked flying with the guys whose planes bore the distinctive paint job that gave them the nickname "Red Tails." What's black and white and red all over? That would be this George Lucas exec produced piece of flying ace corn which won't give you a history of the Tuskegee Airmen, but does sport an engaging cast and some exciting aerial hot dogging. As adapted from John B. Holway's book by John Ridley ("Undercover Brother") and Aaron McGruder (TV's 'The Boondocks'), and directed by Anthony Hemingway (TV's 'CSI,' HBO' 'Treme'), everything's too obvious and cliched. After a prologue which might have one thinking of that old flying toaster wallpaper, we're plunked into 1944 Italy where alcoholic flight captain Marty 'Easy' Julian (Nate Parker, "The Great Debaters"), is attempting to coordinate an attack on a train. But his roommate, Joe 'Lightning' Little (David Oyelowo, "Rise of the Planet of the Apes," "The Help"), is the crazy pilot who doesn't listen to orders, and who rushes the train head on and takes it out. Back at base, where a new recruit has just been shown the ropes, the pilots face the wrath of chief mechanic Antwan 'Coffee' Coleman (Andre Royo, "Super"), who views each scrape on a returning plane as a personal afront. Lightning, meanwhile, goes off into town to sweet talk the beautiful Italian girl he buzzed on the way in, easily finding the home of Sofia (Daniela Ruah, TV's 'NCIS: Los Angeles') from a grounds-eye view. The group is made up of the requisite types, led on base by Major Emanuelle Stance, played by Cuba Gooding Jr. as a man intent on chewing his pipe stem, but the young cast are collegial and likable. Still, the story they tell is about a great group of guys, Easy's tippling representing flaws for the whole group, who feel nothing but duty in the face of racism and ignorance. When one of them enters a white officer's club he's quickly shown the door. There's a speech about 100 years of racism not being wiped out by one victory. Then bomber pilot Chester Barnes (Robert Kazinsky, TV's 'Eastenders') spies the Red Tails outside that same club and everyone's hoisting glasses together. One can see what's coming a mile away, including the fate of Ray 'Junior' Gannon (Tristan Wilds, "The Secret Life of Bees," TV's '90210'), forced to bail over enemy territory becoming Stalag 18's first Black POW. After Lightning's first meeting with Sophia is given the "Godfather" treatment, mama being invited by Sofia along on his proposed ride, we see them next in a later scene partially dressed in mama's living room but never see mama again. The one German ace who stands in for all, Pretty Boy (Lars van Riesen), actually has a scar slashed diagonally across his face! Still, some of the air battles are exciting (it's incredible Lucas didn't insist on using 3D) even if they sometimes look a little too perfect. Cuba Gooding's extraneous with his odd MacArthur impersonation, but Howard's honeyed voice is a great vehicle for stinging retorts to prejudiced colleagues, like Bryan Cranston's Colonel William Mortamus. The Red Tails also include Ne-Yo ("Battle: Los Angeles), Elijah Kelley ("28 Days," "Take the Lead") and Marcus T. Paulk ("Roll Bounce"). George Lucas's motivations for bringing this tale to the screen could be debated and there are certainly far better films on the Tuskegee Airmen, but even if it's aimed at gameboys, "Red Tails" isn't all bad and just might make younger audiences look deeper.

Television director Anthony Hemingway makes his feature film debut, with the help of executive producer George Lucas, to bring the story of a groundbreaking group of men who not only fought bravely for their country. They also fought prejudice, segregation, bigotry and racism, proving their detractors wrong. The Army claimed that African Americans could not handle the complexity of flying a plane and tried to stymie the Tuskegee program from its start. The men, both officer pilots and ground crews, overcame all obstacles laid before them – second rate, hand me down equipment and combat missions that kept them at a distance from the enemy. The Tuskegee airmen’s leader, Col. A.J. Bullard (Terence Howard), proved to be a tenacious fighter within the Pentagon bureaucracy and was able to turn things around for the African American pilots and ground crews. Their outdated planes were replaced with state of the art P51 Mustangs and they were given the job of escorting the heavy bombers to and from their target. And, they radically changed the strategy in fighting the Nazis – instead of abandoning the bombers in favor of personal kills, they would prevent the Luftwaffe from getting in amidst the bomber formations. The 332 Pursuit Squadron did their job expertly and the bomber crews dubbed them the Red Tail Angels for the bold color of the tail end of their Mustangs. Unlike the 1995 HBO movie “Tuskegee Airmen,” which covered their story from the very beginning of flight school to the end of the war where 66 of their brethren gave their lives for their country. With “Red Tails,” writers John Ridley and Aaron McGruder jump right into the war and we feel the frustration of the pilots feel when not given the chance to fight. They do not give up trying and, to the chagrin of those opposed to the program, succeed at everything that they are assigned. That frustration changes, though, when the squadron is given the opportunity to prove themselves better than their Nazi counterparts (personified by the particularly villainous German pilot that the American pilots dubbed Pretty Boy – for obvious reasons). It is the case of man, moment and machine coming together to make something greater than the sum of its parts. The special effects boys and girls do a good job of creating the tension, fear and excitement of World War II aerial combat centering on massive dogfights with hundreds of planes whizzing through air trying to shoot each other down. The young pilots who make up the squadron are led by Captain Marty ‘Easy’ Julian (Nate Parker), whose worry over his chicks pushes him to the bottle. He is challenged by his best, but rule-breaking, flyer, Joe ‘Lightning’ Little (David Oyelowo) and surrounded by a bevy of colorful characters with such nicknames as Junior (Tristan Wilds), Joker (Elijah Kelley), Winky (Leslie Odom Jr.), Neon (Kevin Phillips) and Sticks (Cliff Smith AKA Method Man). The script by John Ridley and Aaron McGruder is based on John B. Holway’s non-fiction book, Red Tails, Black Wings: The Men of America’s Black Air Force. It is an old-fashioned war story about overcoming odds, heroism, bravery and skill and the mostly unknown cast makes their characters likable, if not entirely fully developed. It is the combat scenes that are the real draw to “Red Tails,” that and production that must have scoured the earth for every P-40 and P-51 in existence. The deft use of digital effects makes the air combat sequence look real. War buffs will appreciate the attention to detail.