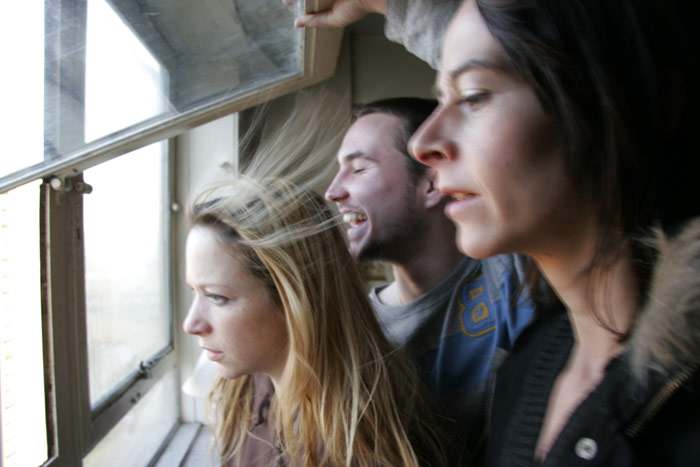 Jackie (Kate Dickie) works as a public space surveillance operator watching banks of monitors in order to alert police to public safety issues. As we observe Jackie we can easily deduce that she has withdrawn from the world. She is awkward when she runs into the people she sees daily on her monitors, but when she runs into a man she'd observed with a prostitute, she is shaken into action and works her way into a relationship that will lead her to the Glasgow housing projects known as "Red Road."

This is the first of an experiment between the Scottish Film Board and Danish director and Dogme '95 founder Lars von Trier, who responded to the board's request to challenge promising filmmakers with a new concept called The Advance Party (see http://www.glasgowfilm.com/redroad/advance_party.html for more information). His new restrictive rule was to have the same characters played by the same actors appear in a series of films. Those characters were created by Danish writer/directors Anders Thomas Jensen ("Adam's Apples") and Lone Scherfig ("Italian for Beginners") and Andrea Arnold, the Oscar winning director of the 2003 Live Action Short "Wasp," is the Scottish writer/director to tackle them. Her film is a moody, gritty exploration of working class Glasgow that features terrific performances but suffers from an over reliance on misdirection and an underlying motivation which, when revealed, doesn't sit quite right. Still, Arnold certainly exhibits directorial flair with her feature debut and Dickie makes a notable film acting entrance. As we follow Jackie, we are forced to try and assemble her back story from the clues dropped by those who interact with her. She has an every other weekend lover who appears to only satisfy physical needs. She receives an invite to a family wedding that mentions a long estrangement. When she attends, there are furtive glances with an aging dad that could imply a history of sexual abuse. Out on the street, she stops to pet the ailing bulldog walked by a man she watches every day, but her empathetic gesture is disrupted when that man she'd seen having sex climbs out of a 24 hour locksmith truck. We don't know why, but Jackie begins to follow him, eventually engineering a meeting in a local bar. At first, Clyde (Tony Curran, "The Good German") appears to be a bit rough trade, but gradually we begin to see a more sensitive side to the man, initially through the naive young couple, Stevie (Martin Compston, "Sweet Sixteen") and April (Nathalie Press, "My Summer of Love"), he appears to keep under his wing. They're with him at that bar and later, when Jackie visits Red Road, ostensibly to gift Clyde with a bottle of whisky, they are the ones who give her access to his apartment. (In keeping with the heavy handed doggie symbolism that runs throughout the film, Stevie and April own a puppy when they are barely able to take care of themselves.) Later still, Jackie and Clyde will connect during a torrid and explicit sex scene which goes a long way towards revealing character emotion. And yet, why exactly has Jackie targeted Clyde? The answer illuminates a rather disjointed form of revenge which gets turned on its head into a catharsis allowing both Clyde and particularly Jackie to let go and move forward (Arnold emphasizes this with Jackie's run-ins with the dog walker (John Comerford), who appears alone, then later with a new pet). Yet while Arnold has given Jackie strange methods for achieving this, Kate Dickie does a lot to sell the character, establishing a numb alienation which she proceeds to rub raw. The actress has gotten a lot of deserved attention (British Independent and Scottish BAFTA Best Actress awards), but I think Curran's even better as he tricks us into making a snap judgement then gradually reveals somebody else entirely. Compston and Press offer Curran good support as the socially irresponsible young couple whose surprisingly real and supportive relationship underscores Curran's humanity. Besides her fine work with the actors, especially in that graphic sex scene, Arnold's biggest achievement is her film's look and tone. with Red Road (for an American analogy, think Chicago's Cabrini-Green, as featured in "Cooley High" and "Candyman"), she's added her location to Jensen and Scherfig's characters and the dingy HDV employed by cinematographer Robbie Ryan ("Wasp") gives the film a dank, modern noir feel while also suggesting those monitors Jackie watches for work. Arnold's soundscape is almost Lynchian, yet hers is grounded in realism rather than surrealism. "Red Road" is a flawed film but nonetheless an intriguing artistic work and a solid jumping off point for Advance Party. Television and short directors Morag Mackinnon (from Glasgow) and Mikkel Norgaard (from Copenhagen) have accepted the challenge to continue the experiment.