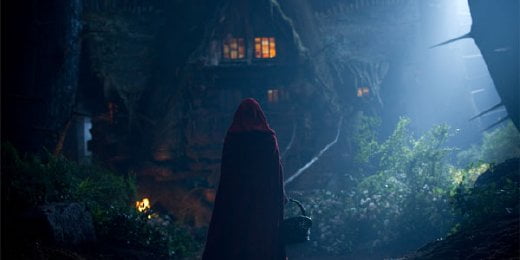 In a medieval forest village, it has been a way of life to sacrifice prime livestock each full moon to a legendary wolf. Valerie (Amanda Seyfried, "Dear John," "Letters to Juliet") has grown up in this village and is on the verge of running away with her childhood love, Peter (Shiloh Fernandez, SHOtime's "United States of Tara"), when the horn that indicates the wolf's presence sounds. She is horrified to learn that the wolf has killed his first human in years - her sister - and her life is upended when the wolf approaches her and she hears his thoughts, promising to destroy her village if she will not leave with him in "Red Riding Hood."

Director Catherine Hardwicke ("Thirteen"), who had what it took to make the first "Twilight" movie better than it had any right to be, fails to do the same with this supernatural two guys and a girl twist on the age old fairy tale. Hardwicke repeats many of Twilight's design elements - the swooping overhead shots of pine forests, the overly landscaped patches of flowers too exotic for their environment - but the story, written by "Orphan's" David Johnson, is a ludicrous pageant of brown-eyed suspects. In the lead, Amanda Seyfried is directed like she's in a fashion shoot rather than a film and Jeremy Irons's son, Max, experienced on the London stage, makes an inauspicious debut as slack-jawed hero Henry, Valerie's arranged, brown-eyed fiance. After her pretty flyover (including an admittedly lovely waterwheel atop dramatic waterfall), Hardwicke closes in on her protagonists as young children trapping a white bunny. But then! Valerie proclaims it would make a nice pair of hunting boots for Peter and the two dicker over who will slice the blade across its throat. Cut to a sweet pink piglet being tied down for the night's offering. Once these baby-animals-in-jeopardy bits are over, though, there is no one to care about. The village men set off to hunt down the wolf in what they believe to be its lair. Peter separates the group at a fork, despite Henry's protests. A wolf is slain, but so is Henry's father. Meanwhile the village priest, Father Auguste (Lukas Haas, "Witness"), who I had no idea was supposed to be a priest while watching the film, has sent for famed werewolf hunter Solomon (Gary Oldman in full out ham mode), who arrives in a carriage with an entourage that includes two African guards and what looks like a huge elephant-shaped teapot and turns out to be a nasty Roman torture device - death by steam. Solomon takes one look at their dead wolf's head and tells them they haven't got their werewolf because the creatures retain their human form at death. The villagers ignore him and begin to party like its independent music night at the Renaissance Faire. A big blur descends and takes out a reveler and everyone flees in horror. The large CGI wolf later corners Valerie and her friend, Roxanne (Shauna Kain, "X-Men: The Last Stand"), but leaves them only shaken. Frustrated, Solomon tortures the village idiot, Claude (Cole Heppell, "Diary of a Wimpy Kid"), and so Roxanne is forced to turn in her knowledge of Valerie's communication with the wolf to save her brother. Solomon decides to use her as bait and Henry, who has cut off his engagement after seeing Valerie rolling in the hay with her lover, approaches the wary Peter with a plan to save her. Once Valerie has gazed into the wolf's eyes, we note everyone of consequence, and some without, have brown eyes, including the normally blue-eyed Julie Christie, one of the film's few entertaining elements as Valerie's eccentric granny. And yes, the 'what big eyes you have' speech is intact, but it's used witlessly in context of the story. During every wolf attack, one plays spot the suspect, but of course they're all always out of sight. There is one notable exception, remembered after the very anticlimatic truth is revealed, but one would have to endure the film a second time in order to see if the filmmakers cheated or not. A sure cheat is the casting of voice actor Archie Rice as the wolf, who surely should have been performed by the actor 'inside' him. Even worse than a cheat is that the film clearly sets itself up for a sequel. The best part of Hardwicke's production is the original music by Brian Reitzell ("30 Days of Night"), which includes traditional instruments of the time (a dulcimer?) yet sounds modern. Costume is also well done, the fabrics, especially Valerie's red cloak, having a home woven look. The over the top art direction at least follows fairy tale conventions, and, in that regard, is pretty to look at. The acting ensemble is entirely left out to dry with the exception of vet Christie and includes "Twilight's" Billy Burke as Valerie's father Cesaire and Virginia Madsen as mother Suzette. The last time this fairy tale was mined for adult content (the animation "Hoodwinked!" excepted) was way back in 1984, when Neil Jordan's "The Company of Wolves" used the subject to examine a girl's sexual awakening. That film hasn't aged well, but its ideas were certainly more thought provoking than this unabashed grab for teenage girls' allowance money.