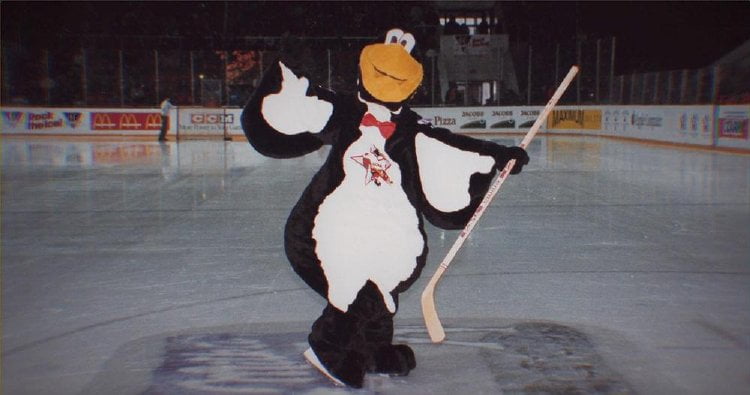 When the Soviet Union imploded, Communism was out and Capitalism was in.  Thousands of Russian hockey players defected to the West’s NHL, leaving its famed Red Army team in dire straits. Howard Baldwin and Tom Ruta, owners of the Pittsburgh Penguins, saw an opportunity and, retaining Red Army manager and Coach Valery Gushin and Viktor Tikhonov, brought in brash marketer Steven Warshaw to turn everything around for their “Red Penguins.”

Gabe Polsky, the writer/director of “Red Army,” returns with a new Russian hockey documentary that may begin amusingly enough, but actually has more in common with Alex Gibney’s “Citizen K” than his own prior film.  The film’s trailer emphasizes the crazy tale’s more hilarious aspects, like the strippers and live beer pouring bears Warshaw used to bring in the crowds, but this is a serious documentary about how quickly democracy was corrupted in a country shell-shocked by its sudden arrival as viewed through the eyes of an American venture.  “Red Penguins” is such a wild ride, it screams for the journalism of Hunter S. Thompson.

Warshaw relates his shock upon his arrival in Moscow.  ‘His’ hockey arena looks like it was bombed, spaces where prized boxes would be in the West co-opted as housing by electricians, a ‘trophy case’ at the entrance standing about three feet tall representing Russia’s greatest sports team, Plexiglas around the rink so battered you couldn’t see through it.  A strip club, The Red Zone, where nude women were lowered in cages, operated in its basement.

At first, games were very poorly attended, but Warshaw turned up the showmanship, offering entertainment in between periods he hoped Gushin would be too busy to notice.  The strippers and bears brought in the crowds and the Red Penguins became Moscow’s biggest draw.  Disney even came calling, absurd as that might seem with their Mighty Ducks franchise.  But the boom lowered with Yeltsin’s Constitutional Crisis that ushered Putin into power.  The Russian mob pushed their way in.  Warshaw got the message and got out before the team’s still photographer, an assistant coach and the head of the Russian hockey federation were gunned down and a Red Penguins player was found dead.

Polsky uses archival footage, stills and current talking heads including Warshaw and his frenemy Gushin.  The team’s mascot, Alexander Von Bush, now a Moscow based artist with a Salvador Dali moustache, comments upon the past as does Russian businessman Alimzhan Tokhtakhunov, whose views are placed within the context of his shady background.  We see the news reports of Alexander Lyubimov, Russia’s most famous TV personality, whose show illustrating all this chaos was threatened.  He was shot too.

Don’t come to “Red Penguins” expecting hockey action as there is precious little of that.  Even so, this is one unusual sports documentary and an alarming historical recap.

The Soviet Union officially dissolved in 1991, leaving the countries left to figure out democracy and how you do it. One method is to go the capitalist way and infuse money, lots of money, into a new, international hockey team. Director of “Red Army (2014),” Gabe Polsky, follows the meteoric rise and spectacular fall of the hockey team nicknamed “Red Penguins.”

Just to give you a thumbnail sketch of recent Russian hockey history following the dissolution as laid out in Polsky’s latest documentary:

I thought, when I started watching “Red Penguins,” that I was getting an amusing look into that time when one form of government, soviet communism, falls, and another, rampant capitalism without law, and rises from the ashes. The only problem is, capitalism is not democracy and one without the other will lead to the above-mentioned rampant corruption and extortion.

Central in this passion play are Howard Baldwin, former owner of the Pittsburgh Penguins and the force behind the deal, and Steven Warshaw, the front man responsible for running the show. Neither was prepared for the forces of corruption that took over the fledgling Russian Republic, leading to the descent of Boris Yeltsin from power and the rise of Vladimir Putin and the oligarchs.

As I said, I expected something more lighthearted from “Red Penguins.” And, at the start of this eye-opening look at Russia post Soviet Union, it was just that. But, as the specter of Russian corruption and lawlessness took over the good, sportsman intent of the naïve Americans was destroyed and replaced with greed. The darker turn as the story ran on changes the tone from hopeful to something considerably less.