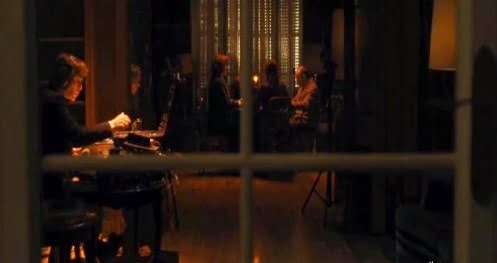 Dr. Margaret Matheson (Sigourney Weaver) teaches an underfunded university course on the science of testing paranormal activity while her colleague Paul Shackleton (Toby Jones, "The Hunger Games") gets loads of money for testing ESP. Why? Because Dr. Matheson is a skeptic who has debunked every case presented to her. Except one. Thirty years after blind psychic Simon Silver (Robert De Niro, impersonated like a "King of Comedy" out take by Eugenio Mira as a younger version) gave her a moment of doubt in front of an audience, he's come out of retirement, and she's determined to figure out his stage tricks, his "Red Lights."

Director Rodrigo Cortés found all kinds of ways to keep us visually interested with his man-in-a-coffin tale "Buried," but didn't beef up deficiencies in the script. With "Red Lights," he takes on writing duties himself and introduces even more problems than his last film had. After a relatively solid first half, everything goes to hell in a frenzy of excess in the second, and the movie is so murkily shot by Xavi Giménez ("Agora") we might as well still be underground. Cortés immediately panders to genre hounds with an establishing prologue featuring a haunted house and a seance. Dr. Matheson (named as a tip of the hat to sci-fi writer Richard) and her inexplicably devoted assistant Tom Buckley (Cillian Murphy, "Batman Begins"), a physicist, arrive at a large home where a family is being terrorized by resounding crashing noises. Traci Northrop (Jeany Spark, TV's 'Wallander'), a theatrical medium with a studied accent, is already there and after everyone experiences the crashing haunting, she conducts an equally eventful seance. Matheson explains it all to us, if not her clients, in a subsequent lecture to her students, one of whom, Sally (Elizabeth Olsen, "Martha Marcy May Marlene"), catches Tom's eye and is recruited. When Palladino (Leonardo Sbaraglia, "Intacto"), a famous psychic comes to town, the trio park outside of his venue and Sally soon becomes adept at picking out red lights - people in the crowd making notes around oblivious others - and documenting them. As Palladino's act includes the curing of cancer, his bust is of the criminal variety. But just as Matheson's on top, her nemesis, who just possibly stopped his last critic's heart, comes back. And it's here that Cortés seems to lose the reins. Perhaps De Niro's star wattage overcame him because even the man's introduction is silly. The door of a private plane opens. Simon stands there in stylish dark glasses and silver winged hair. He takes off his glasses so we can see that he is blind. He puts them back on and descends. Cortés turns the dial up to 11 - the entire city is in a fevered pitch because some Uri Geller-like psychic is coming out of retirement. Maybe in Geller's day, maybe (and Cortés' production flips back and forth between the old and the new, mixing cell phones with pay phones, old vehicles with SUVs, digital cameras with Polaroids), but even that's a stretch. The psychological aspect of the thriller is uneven. Matheson's kept her only son on life support for decades because she's never seen proof that there is 'anything else.' We hear something from Tom about his mother, stomach cancer and a medium that's all left rather vague. Things wind up to a fevered pitch before a rewind, like "The Prestige," but without any rabbit coming out of the hat. Sigourney Weaver keeps things interesting, but she and Tom exchange central character roles and Murphy succumbs to his director's hysteria. De Niro is outshone by Joely Richardson (2011's "The Girl with the Dragon Tattoo") as his haughty manager Monica (in one scene during a talk show, Richardson and her cohorts verbally circle Weaver like a pack of wolves in sheeps' clothing). Also notable in a small role is Craig Roberts ("Submarine," "Jane Eyre") as Ben, another student pressed into service. Rodrigo Cortés is drawn to some intriguing material, but he needs to treat it with more restraint. "Red Lights" is unfulfilled potential.