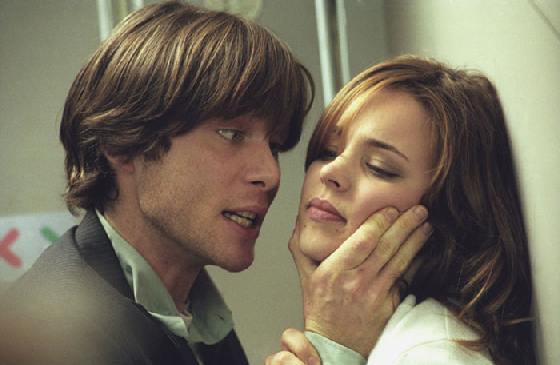 Fear-of-flying hotel manager Lisa Reisert (Rachel McAdams) is heading home to Miami after attending her grandmother’s funeral in Dallas. Stormy weather conditions have delayed her flight and she, finally, gets booked on the last plane out. A handsome young man, Jackson Rippner (Cilian Murphy), buys her a couple of drinks to help calm her nerves and then ends up in the seat next to her on the flight. But, what seems like casual flirtation becomes a life and death struggle in Wes Craven’s “Red Eye.”

Lisa Reisert (Rachel McAdams, "Wedding Crashers") is a Miami hotel manager on her way back from her grandmother's funeral in Dallas when she falls into an airport flirtation with fellow traveler Jackson Rippner (Cillian Murphy, "28 Days Later," "Batman Begins'). Lisa's pleasantly surprised to discover Jackson is also her seatmate, especially when he distracts her during a bumpy takeoff. Jackson isn't trying to assuage her fears, though, but use them for a terrorist plot against one of Lisa's hotel guests in director Wes craven's ("Scream") "Red Eye." Screenwriter Carl Ellsworth's double entendre title (a shipment of "red eye" snappers are used to hide the terrorists' weapon) is the absolute extent of this thriller's ideas. Ellsworth's television background may explain why "Red Eye" feels like something that should have landed on USA networks. Horror director Craven's first hacking stab at a thriller devolves into a scary guy brandishing a big knife chasing a pretty girl. Current 'it' girl Rachel McAdams and Irish heartthrob Cillian Murphy had best hope this one passes beneath the radar at supersonic speed. Just to make sure we're awake, the villain's name is immediately pointed out when Jackson explains why he doesn't prefer Jack. Lisa has encounters with two other passengers in the check-in line, eleven year old Rebecca (Brittany Oaks, Thing Two from "The Cat in the Hat") and an elderly Dr. Phil fan (Angela Paton, "American Wedding"), so they can come in handy later. As soon as the seatbelt sign is turned off on the plane, Jackson springs his diabolical plan - that Lisa use the Airfone to move Deputy Secretary of Homeland Security Charles Keefe (Jack Scalia, TV's "Tequila & Bonetti," "All My Children") from his regular room or a guy canvassing her dad Joe's (Brian Cox, "The Bourne Supremacy") home from a silver BMW will kill him. And of course, this same guy is Jackson's insurance that Lisa will not ask for help on the plane, even though he contradicts himself about what will set the man in action. Lisa does, of course, try to be resourceful. Her first call to assistant manager Cynthia (Jayma Mays, in an endearingly ditzy debut) gets cut off by atmospheric interference but she continues to act the part. She almost pulls it off, too, EXCEPT THAT THE PASSENGER DIRECTLY ACROSS THE AISLE FROM RIPPNER IS ALSO USING AN AIRFONE. We have a not-too-bright villain and an unbelievable coincidence right off the bat. Twice Jackson catches Lisa trying to pass messages and further threats ensue, but she is able to overtake him, after setting his plan in motion, right as the plan lands. This requires the unplanned assistance of an astute eleven year old and several breakdowns of airport security at Miami International (not to mention the U.S. Coast Guard), but of course, there is still the race to stop the bad guys as well as a personal vendetta to deal with. "Red Eye" is so cheesy it makes the 2002 Miami terrorist 'comedy' "Big Trouble" look plausible. Besides the aforementioned Mays, who doesn't convince as Lisa's managerial backup but sure is cute doing it, the only other saving grace is Suzie Plakson ("Wag the Dog") in the smaller role of a savvy Senior Flight Attendant. McAdams' charm is wasted in a role that only requires terrorized victim or determined action-girl. Murphy, who was so creepily menacing in "Batman Begins," is just shallow in a character that has none of the imagination of The Scarecrow. Brian Cox literally fulfills that old performance cliche by appearing through most of the film at the other end of a phone. It's not only the dumb villain, airport security lapses and Lisa's sudden kickboxing and black ops abilities that astound, however. I'm no fisherman, but I'll be surprised if someone can tell me that the retrieval of a major weapon as depicted in this film is plausible. Even if it is, why is there only one boat to be seen on the horizon in Miami, a situation considered so suspicious, the Coast Guard is sent out? I did learn one thing from "Red Eye," and that was that there is a cocktail known as a Bay Breeze, a variation on the Sea Breeze which substitutes pineapple juice for the grapefruit. I tried one when I got home and you know what? I prefer the one I already knew about.

Director Craven foregoes the horror and gore genre that have been his staple for decades and, instead, goes for a suspense thriller by Carl Ellsworth and Dan Foos. He should have stayed with what he knows best. Eminently likable Rachel McAdams stars as Lisa, the capable manager of a luxurious Miami hotel, who is on her way home. While waiting in the ticket line, she is next to a rude businessman who loudly complains about the delays and browbeats the harried ticket agent. Rippner steps in to help the poor woman and tells the man off, impressing Lisa with his understanding and they have drinks together while waiting for their flights. When boarding is called she is surprised to find that Jackson is her seatmate. Things are looking up for a pleasant trip until Jackson quietly tells her that he needs her help or her father (Brian Cox) will die a violent death. Jackson, it turns out, is a hired assassin on a mission to kill the Deputy Secretary of Homeland Security, Charles Keefe (Jack Scalia), who is scheduled to stay at Lisa’s hotel. Lisa must, on threat of death of her father, have the high-ranking official moved from his usual quarters to a specific room overlooking the ocean. Trapped and with nowhere to go at 30000 feet she knows cannot refuse the order but must try despite the deadly threat to her father. In typical suspense thriller fashion Lisa tries to thwart the killer’s plans but Rippner keeps one step ahead of her. But, the plucky and resourceful Lisa won’t be deterred and a cat and mouse game ensues. The action moves from the sky to solid ground and this is where the film devolves into a routine battle of wills that ends with a slam-bang finale. The problem is, the story is dumb and the requirement to suspend disbelief is all too necessary to make this dud mildly compelling or even remotely believable. Rachel McAdams makes the first misstep in what have been some very good choices of roles. She provided bitchy excellence in “Mean Girls,” charmed my socks off in “The Notebook” and lit up the screen with her infective smile and laugh in “The Wedding Crashers.” But, with “Red Eye” she is stranded by the hokey and dumb story that fails to utilize her talents. Cilian Murphy, too, is left high and dry in the bad guy role that pales to his recent perf in “Batman Begins.” The minimal supporting cast is not able to do anything to flesh things out much although newcomer Jayma Mays is amusingly ditzy as Lisa’s assistant who is called upon to both help and thwart the killers. Why such a person would be put into a position of authority is overshadowed by the actress’s likable persona. Brian Cox could have telephoned in a performance that consists of spending most of the time on the phone. Suzie Plakson, as the head attendant aboard the flight, is notable in a cast that is relegated to little more than stick figures. Carl Ellsworth’s routine script is on a par with the mediocre tech aspects of “Red Eye.” Helmer Craven could have slept through the whole production and I don’t think it would have made a difference. I didn’t feel as cheated as I did with the horrendous “Deuce Bigelow: European Gigolo” but I would surely be pissed off if I spent 10 bucks to see this flop.