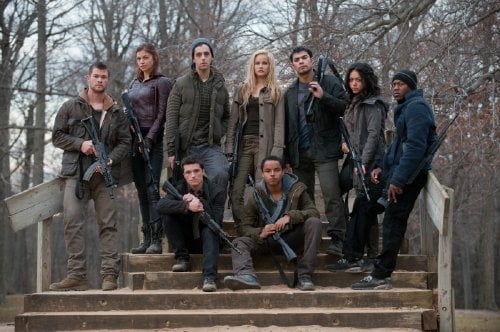 The residents of Spokane awake to roar of many large engines and explosions in the sky. As they, sleepy-eyed, stagger from their homes, they see the blossoms of thousands of parachutes descending on their city. As the gunfire and explosions increase, some of the residents, mostly teenagers, jump into their cars and trucks to escape a new “Red Dawn.”

It is probably not fair to the remake of the 1984 cult classic, “Red Dawn,” to be reviewed by someone who has watched the original a score or more times. I loved the Cold War politics of the time when Ronald Reagan declared the Soviet Union “The Evil Empire.” The first “Dawn,” in the hands of one of my favorite hack writer-directors, John Milius, is a hoot with its blatant jingoism. In one scene, the camera shows a close-up of a bumper sticker saying “They’ll get my gun when they pry my cold, dead hand from it.” The camera pans down to a lifeless hand holding a pistol. Suddenly, a booted foot steps on the hand and pries the gun away. I laugh every time I see that scene with all of its blatantness. Unfortunately, the Dan Bradley-directed version of the Cold War tale is updated to the silly premise that North Korean invades Spokane, Washington. This story follows a similar framework to the ’84 film – a group of high school football players, led by US Marine on leave Jed (Chris Hemsworth), upon seeing invading paratroopers descend from the sky, pile into a pickup truck and head to the relative safety of the countryside. There, they learn that the US is being attacked by the combined forces of Russia and North Korea (see, we still have an “evil empire”). Jed, the only one with military training, takes the ragtag group of survivors – his brother Matt (Josh Peck), mayor’s son Daryl (Connor Cruise), Matt’s best friend Robert (Josh Hutcherson) and the rest – and puts them through an accelerated course in urban guerrilla warfare. This “Red Dawn” does not adhere to the original Milius story and deals with the uncertainties of life in a troubled time – like, now. The requisite replications of iconic scenes (at least to fans of the original) are check listed so those familiar with the first “Dawn” will recognize the story. The action is transferred from the mountainous terrain of Colorado to urban Spokane as the Wolverines (the name of the high school football team before the invasion) strike back at the North Korean bad guys let by Captain Lo (Will Yun Lee). (The bad guys in the first film are much more colorful, nuanced and badass compared to the dour-faced Lo.) There are departures from the original screenplay, like the tacked on romance and rescue of beautiful Erica (Isabel Lucas) by boyfriend Matt, even though he endangers the rest of the group with his loose cannon heroics. The Powers Booth Air Force colonel in the earlier version is replaced by a squad of US Marines fighting for the Free America Army who join the Wolverines in their unrelenting harassment of the North Korean command. This translates into blowing a lot of stuff up and this “Red Dawn” does a whole bunch of that. Special effects abound in the explosive battles that ensue between the good guy Americans and the evil North Koreans. The Russians are implicated in the invasion (seriously, North Korea could invade the US?) in the guise of a Spetznatz colonel lurking on the edges of the action. Where the first film had a natural feel with its cast, led by Patrick Swayze, the new “Dawn” feels more like a plug and play in casting. None of the characters, except maybe Hemsworth’s Jed, rings true with most doing line readings, not creating characters, so none flesh out. You could get your arms around the Cold War turned hot as Cuban troops (remember the client wars when Cuban forces stood in for the Soviets?) invade the soft center of the US. Them damn Russkies and their puppets did not count on the verve, pluck and invention of us Americans when defending our land. The Bradley “Red Dawn” plays more like an extended video game. It is entertaining but really aimed at younger audiences – and all of us old guys who love the original and see this out of curiosity.