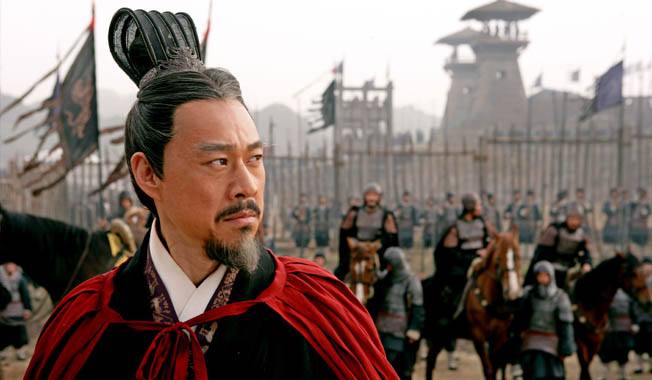 Two centuries after the birth of Christ, China's Emperor Han had become a puppet of his Prime Minister Cao Cao (Zhang Fengyi, "The Emperor and The Assassin"), now also the General of vast armies and naval resources. The leader of the Western Xu Kingdom, Liu Bei (You Yong), a protector of his people challenged Cao Cao but was defeated while saving his own refugeed citizens. But his brilliant military strategist KongMing (Takeshi Kaneshiro, "House of Flying Daggers") successfully forged an alliance with the southern Wu Kingdom's Sun Quan (Chang Chen, "Happy Together," "Three Times") via his great military Viceroy Viceroy Zhou Yu (Tony Leung, "Hard Boiled," "Lust, Caution"), who is married to China's legendary beauty Xiao Qiao (Chiling Lin), rumored to be the reason for Cao Cao's desire to wage the war which ended at "Red Cliff."

Cowriter (with Chan Khan, Kuo Cheng and Sheng Heyu)/director John Woo ("Hard Boiled," "Face/Off") hasn't made a feature film since 2003's "Paycheck," but once one has seen the epic "Red Cliff" it's easy to understand why. Released as 5 hour 2-parter in Asia, but reworked as a 2 1/2 hour film for Western audiences, "Red Cliff" is a historical epic featuring great characters extremely clever tactical maneuvering, and scope, scope, scope with the added bonuses of a very early feminist warrior princess and an affecting love story. The film's landscapes are so incredible it had me thinking about visiting China and despite a few rough patches, where a plethora of characters need to be distinguished quickly or sides become obscured in battle, the film always engages. Cao Cao is established as the bad guy by the rabbity way Emperor Han responds to him and Liu Bei is established as a caring leader via his concern for the villages fleeing from Cao Cao at the expense of fighting back. Bei's general Zhao Yun (Jun Hu, "East Palace, West Palace") saves his infant son back in the village, but must report the death of his wife. We are in the presence of heroic men. But the most interesting two characters are two who will form a beneficial bond. The extremely handsome Takeshi Kaneshiro imbues KongMing with youthful wisdom, always delivered with the shadow of a sense of humor. When he arrives at Zhou Yu's military post and observes Yu's General (and former pirate) Gan Xing's (Shido Nakamura, "Letters from Iwo Jima") training exercise, he declares it outdated, a comment Yu (the older, but equally good looking Leung, reunited with Woo after almost two decades) impossibly hears (Yu has been absorbed in refining a young boy's flute). The two come to an understanding by improvised harmonizing on classical Chinese string instruments (a beautiful and odd piece of music with echoes of Ry Cooder). With Sun Quan now on board, his sister, Princess Sun Shangxiang (Wei Zhao, "Shaolin Soccer"), makes herself a part of the action, first as their strategy's lure, later as an ingenious spy in enemy camp (who communicates with home base via a carrier pigeon - Woo's signature white dove). The military stratagems are ingenious and Woo builds them so that the audience is as surprised as Cao Cao's forces. Hand to hand combat features sprays of blood courtesy of spears and arrows, but is not excessively gory. KongMing's talents remind us how much weather has influenced historical battles, but his slyness in getting the enemy's unwitting assistance is perhaps the film's most entertaining gambit. Meanwhile Yu's wife, desirous of peace, takes action herself using her own skills in unexpected ways. With an $80 million budget, this is the most expensive film ever produced in Asia and it's an eyeful. Woo's stylish violence combined with sweeping vistas and intimate relationships makes this famous period in Chinese history fascinating for any audience.