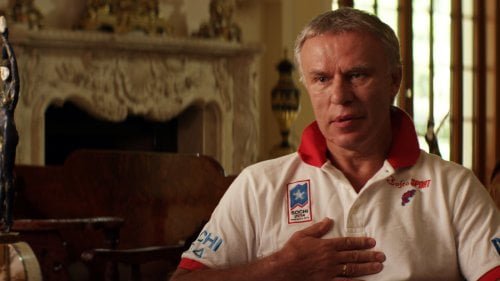 When we hear the words “Red Army hockey team,” most Americans will remember the Miracle on Ice in Lake Placid during 1980 Winter Olympics when the rookie American hockey team defeated the once-thought unbeatable Soviet national team. Sophomore documentary filmmaker Gabe Polsky takes us back to the cold war days with his insightful look into the “Red Army.”

In the U.S., everyone remembers the 1980 American semi-final win by the men's hockey team at Lake Placid over the Russians as the 'miracle on ice.' The U.S. went on to win the Gold and few thought about the fate of the Silver medalists, the Russian team considered the best in the world, a club known as the "Red Army." Writer/director Gabe Polsky's ("The Motel Life") look at Russian hockey from the point of view of defenseman/captain Slava Fetisov is illuminating from political, cultural and athletic perspectives. Polsky's documentary both makes that 1980 American win seem even more miraculous while also getting its audience to consider the ramifications of that crushing defeat on the team that lost. From the unique passing game formulated by the grandfatherly coach Anatoly Tarasov to the oppressive training of the hated Viktor Tikhanov, "Red Army" offers Soviet hockey as a symbol of a changing nation. Polsky uses Ronald Reagan footage as his entry point into a Cold War fought literally on ice then segues to Fetisov who talks about being a happy child despite sharing a 400 square foot apartment with no running water with two other families. The 250 rubles needed for the gear to try out for the Red Army was a hardship for most Soviet families, yet hundreds waited hours for the privilege. At the age of 16, Fetisov was chosen to play against the West and he and his teammates were astounded by the five star hotel Canada housed them in and the mind-blowing array of goods available to purchase, yet love of their country overshadowed all. The Russians won all five of their games. Things changed in 1980. With the Soviet invasion of Afghanistan ongoing, the team was more than an athletic adversary and their stunning loss was a huge blow. The unpopular Tikhanov fired most of the returning players and instituted even harsher training regimes. The Red Army team was kept isolated at camp for all but a month of the year, one player denied a visit to his dying father. Practice occurred four times a day. But the team built an unbeatable line - the Russian Five - and had one of the world's best goalies in Vladislav Tretiak. After recapturing the gold in Sarajevo, players began to leave for the NHL in deals that sent as much as 90% of their compensation back to Mother Russia. Fetisov was promised the NHL, but Tikhanov kept reneging and Fetisov wasn't interested unless he went as a fully free agent. Showing tremendous courage, Fetisov quit, even when threatened with deportation to Siberia. Ten days later, he got what he wanted on his own terms. And yet these incredible players did poorly when they came to the West. Signed to the New Jersey Devils, Fetisov had to play with Alexei Kastanov, the former best friend who'd denounced him back home. The men looked lost on the ice in a different style of game. It took Detroit Red Wings coach Scotty Bowman to realize what was happening, forming an entire line of Soviet players dubbed the 'Soviet Symphony.' He went on to win the Stanley Cup. Ever feisty, Fetisov fought the hockey commissioner to bring the Cup to Moscow. In 2002, disillusioned by the lack of patriotism shown by Russian NHL players, Fetisov returned at Putin's invitation and became a Minister of Sport. Polsky's dynamic look at the recent history of Russian hockey and many of its greatest players is not only one of the great sports documentaries but a unique take on the Cold War. While he never addresses the inequality of 1980's match, when U.S. teams were still comprised of amateur players, he does what he's set out to do, showing how Communist politics produced a team style of play that was formidable. Grade:

What we have here is a documentary that will appeal to fans of the genre and the fans of the game. Gabe Polsky centers his documentary on Vyacheslav “Slava” Fetisov, the youngest team captain on the Soviet national team and the first Russian to sign an NFL contract – though he was prevented going west by his tyrannical, KGB-assigned coach Viktor Tikhonov for a year. Fetisov is an articulate subject for the film and Polsky uses his interviews to tell the star player’s story as well as the team history The film follows the Red Army hockey team from its inception in 1954 to its disbanding with the fall of the Soviet Union in 1991. The film concentrates on Fetisov and the other members of the Russian Five – Sergei Makarov, Vladimir Krutov, Igor Larionov and Alexei Kasatonov – and their years of dominance against all comers (except, of course, for the Miracle Team). Polsky delves deeply into how the Soviet Union created their athletic teams, recruited children and forming them into a disciplined and unbeatable juggernaut. The Soviet coaches – especially former Red team coach and legend, Anatoli Tarasov – took “the best of the best of the best.” But, the players had few, if any, rights and were forced to follow Communist policy or be banished from the team. We think, in the west, that these athletes were treated like royalty in their home country. But, the reality for the players was they would spend 11 months a year in hockey camp and away for family and friends, virtually held as prisoners by those in power. Fetisov articulates on the impact this stern regimen on his family and is the voice of his fellow teammates. The filmmaker gives thorough attention to the time when the former Soviet players came west to play in the NHL. But, the playing style of the NHL was radically different from the Red Army and the imported players had difficulty adjusting to the new tactics. That changed when the Russian Five were recruited by the Detroit Redwings and another legendary coach, Scotty Bowman, and allowed to play as the Five. The result was two back to back Stanley Cup wins for the ‘Wings. “Red Army” is one of the best documentaries from 2014, though the Academy of Motion Pictures Arts and Science (AKA Oscars) did not deem to include it on the Best Documentary Feature list. Do not let that stop you from making the effort to see this thoughtful, informative film.