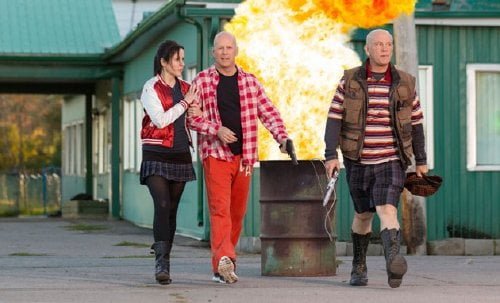 Once you put together a team of 'retired extremely dangerous' special ops agents, it appears they can't remain retired. When a hi tech, ultra lethal weapon disappears, former Black ops CIA agent Frank Moses (Bruce Willis) reunites what's left of the gang since the last time to battle hired assassins, terrorists and Government officials to ensure it ends up in safe hands in "Red 2."

I wasn't particularly a fan of "RED," finding it relied a bit too much on that twee concept of oldsters acting 'inappropriately' for its comedy. The cast also didn't bring much new to the table with the exception of Malkovich's LSD-addled Marvin. What a surprise, then, to find that "Red 2," with several new characters, a lighter-on-its-feet entertainment. Now that all the team gathering exposition is out of the way, the action starts faster and returning writers Jon & Erich Hoeber have a lot more fun with Mary-Louse Parker's character now that she's stopped screaming. After a prologue heavy on product placement that finds Sarah disgruntled with Frank's embrace of domesticity, Marvin's 'death' spurs Frank into the kind of action that gets him branded a domestic terrorist by Jack Horton (Neal McDonough, TV's 'Justified'), clearly an internal U.S. baddie. He hires Han Cho Bai (Byung-hun Lee, "G.I. Joe: Retaliation"), the world's deadliest hitman to take out Frank and Marvin while MI6 turns to Victoria (Helen Mirren), who's clearly given up her tea cozies of the first film as she's found liquefying bodies in her bath. Good thing Marvin's around to orchestrate the chaos, arming Sarah and targeting wine snob The Frog (David Thewlis, "The Lady," "War Horse") as the man with the info they're looking for. Director Dean Parisot ("Galaxy Quest"), taking over the reins from Robert Schwentke, lets the film run on a little long, but he does a great job balancing the character-based comedy with car chases, shoot outs and plane crashes. Romances and rivalries are the themes upon which "Red 2" revolves and they spin quite merrily. When Katja (Catherine Zeta-Jones), an old flame of Frank's comes on the scene seemingly intent on winning him back, Sarah's determined to outfox her and Frank finds himself on the losing end with both (Sarah's willingness to seduce field ops is a cute running gag). And while Frank gets the upper hand with Han, stealing his private plane, Han remains a constant thorn, like Kato to Inspector Clouseau. All paths lead to a mental hospital, where Victoria gains access insisting she's the Queen of England (amusing Mirren joke). There they find the author of 'Nightshade,' Bailey (Anthony Hopkins), a Cold War era weapons genius whose mental instability poses their last challenge. Willis has more to work with here and it shows as the man who's so smooth in the field comes up against feminine wiles. Byung-hun Lee's a terrific addition, sexy and formidable and a good frenemy for Frank. Hopkins has a high old time leading all along his zigging, zagging path. Zeta-Jones, though, looks and acts surgically enhanced. Brian Cox also returns to admire the way his love Victoria's toes curl as she pulls the trigger. The plot takes the cast from the U.S. to London, Paris, Moscow and the Iranian Embassy and while it's not the main attraction it at least holds up on its own, unlike the recent "The Heat."