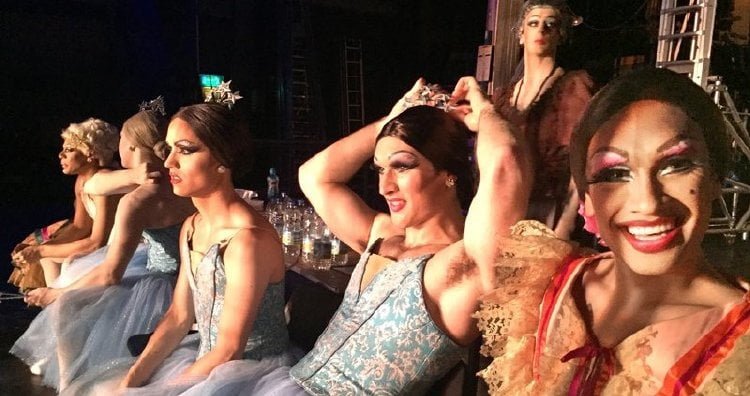 Writer/director Bobbi Jo Hart ("Rise") casts a wide net, giving us an inside look at the Trockadero company behind the scenes, in rehearsal, performing, touring and during their down time. You're sure to come away from the experience with a big grin plastered across your face. As one interview subject aptly notes, 'If you're able to joke in a foreign language, you've got a good grasp of it. It's the same with ballet.' These guys may bring a lot of humor into their act, but they can really dance, ABT principal dancer James Whiteside stating that 'he doesn't know how they do it.' They're to ballet what the Harlem Globetrotters are to basketball. But Hart also gets to the heart of this group. Unlike the fiercely competitive world of traditional ballet, the Trockaderos are a tremendously supportive corps, helping an autistic member along and generally being there for each other. Artistic director Tory Dorbin chokes up addressing his corps, noting that there are now three married couples among them, something he couldn't have conceived of when he danced with them decades earlier. We follow several of the dancers, singly or coupled, as they relate to their overwhelmingly supportive families. There are birthdays (one dancer is over 40(!) while another reaches this milestone during filming) and weddings. We follow them on tour (a shot inside a tour bus reveals a dancer, his feet propped on a seat back clad in combat boots - and shocking pink socks), one woman proud to have raised her young daughter to be a Trockadero fan (as someone notes that not that long ago, children attending performances was unheard of). They are rock stars in Japan, Hart using an old photograph of the company with a prima Japanese dancer to segue into AIDS impact on the group, Dorbin noting that every dancer on her left died of AIDS while all on the right survived. In Edinburgh the group gets a day off, one couple heading towards the Castle while another, Rafaelle Morra, teaches an enthusiastic senior beginners class. If there's a flaw in the documentary, it is that Hart delves into family matters too long in her third act, Morra's second or third visit to his disabled father in Italy bringing us too far afield of her main subject. But this good natured work cannot fail to bring new fans into the fold. The Trockaderos are infectious and watching how they craft their performances while experts analyze just how they do it is mesmerizing. The DVD: "Rebels on Point" is available on DVD from Icarus Films. There are three extras on the disc, only for the most dedicated fans. Backstage is a 49 minute collection of dancers applying makeup and donning costumes before performances in Edinburgh. Interviews is an additional 42 minutes of individual dancers talking with an extended piece with Dorbin at the end. The 44 minute Outtakes is a collection of various subjects from dancing mentors to the corps' autistic dancer to an analytical makeup class. Grade:

I have known, and seen snippets of performances, of Les Ballets Trockadero de Monte Carlo, the world’s premier all-male gay ballet troupe, for many years. For the first time ever, documentary filmmaker Bobbi Jo Hart, delves into the troupe, its history and its future in “Rebels en Pointe.” Hart creates an often fascinating, though frequently indulgent, look into the wonderfully talented athletes who also happen to be world class ballerinas. What I wanted from “Rebels” is more of their performances, the preparations and the goings-on backstage as the pros ply their artistic craft for the pleasure of thousands world-wide.. The performances of the Trocks are worth the price of admission to “Rebels en Pointe.” They are masters at both classical ballet and comedy which is subtle (at least to the uninitiated) and very funny – and all in mime. There is nowhere near enough of the perfs by the dance troupe that is, at its heart and soul, a family Personal looks into the lives of the members of the troupe, now, tends to take me away from what I really want – more Trocks. The film gives equal shrift to both the on-stage action and the up-close-and-personal Wide World of Sports-like treatment of a few of the players. Just like when I used to watch WWoS, I wanted more action, less talking.