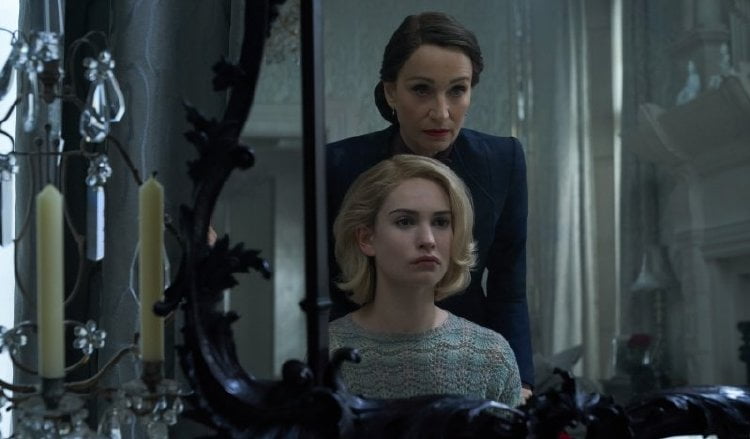 When the paid assistant (Lily James, "Cinderella," "Yesterday") to crass American Mrs. Van Hopper (Ann Dowd, "Compliance," Hulu's 'The Handmaid's Tale') is tasked with procuring Maxim de Winter (Armie Hammer, "Free Fire") as her dinner companion in a Monte Carlo dining room, she inadvertently meets her mark under embarrassing circumstances.  But handsome, recently widowed de Winter is chivalry personified, especially when he sees the naïve young girl demeaned not only by her boss, by the dining room’s maitre‘d.  A courtship ensues, but when spiteful snob Van Hopper attempts to break it up by abruptly returning to the U.S., de Winter pops the question.  But the dazzled young bride will face more serious obstacles in the form of the famous Manderley’s housekeeper Mrs. Danvers (Kristin Scott Thomas) and its former mistress “Rebecca.”

Wheatley’s “Rebecca” bears little resemblance to the only Hitchcock film to win the Best Picture Oscar other than the repetition of the novel’s indelible first line as his opening gambit and the characteristics of his nameless heroine.  Everything about this production is dialed up a notch or two and jogged slightly sideways, at times bordering on camp.  It is certainly an eye opening new look at a story we may only think we remember.

After a brief (and very unreal looking) shot of the infamous haunted estate (‘Last night I dreamt I went to Manderley again...’) shrouded in gloom, cinematographer Laurie Rose ("Kill List," "High-Rise") plunges us into a luxuriously retro and sun-drenched Monte Carlo where costume designer Julian Day (“Rocketman”) aids immeasurably in the lay of the land with Van Hopper’s over the top and over the hill garishness, her assistant’s worn but feminine demureness and de Winter’s sleek gold suit.  If at first the handsome and much buzzed about de Winter frowns upon the young companion’s treatment, he’s delighted by her adventurous order of a dozen oysters for breakfast when he invites her to sit at his table.  Soon she’s sneaking out for coastal drives, de Winter tossing her the keys to take the wheel for their return (a symbolic gesture which will resonate at Manderley, just as a yellow suit will signal that she is now the prize).  Passionate love making on the beach is even more clandestine.

But the new Mrs. de Winter finds herself even more at sea in her new home than she did on the Riviera, her ignorance of running this type of household sniffed at by an insincerely surprised Danvers who ‘thought she’d been a lady’s maid.’  She’s given a room opposite the more lavish one Rebecca once occupied and while her sister-in-law Beatrice Lacy (Keeley Hawes, "High-Life") becomes a true friend, her addled mother-in-law keeps insisting that she is not her son’s wife (in a ghoulishly comic bit).  Maxim sleepwalks towards his deceased wife’s bedroom.  Even English Spaniel Jasper is insistent on entering Rebecca’s room, which her successor finally does, breaking a figurine which Danvers will upset the entire household over.

Just when the new Mrs. De Winter is at her lowest, along comes Jack Favell (Sam Riley, "Control," "Free Fire") to cheer her with a day of horseback riding before she learns he is not only Rebecca’s cousin, but has essentially been banned from the estate by her husband.  Treachery surrounds her, as will be made abundantly clear during her boldest stroke of resuscitating Manderley’s costume ball.  Then the mystery of Rebecca’s death comes rushing back when her corpse washes up on the jagged coastline, throwing into question just whose corpse Maxim identified months earlier.

Wheatley gives the sweeping tale the pull of Gothic romance, frequently picturing our heroine reclined in overhead shots which pan up, suggesting evil afoot, as does the coastline abutting Manderley, its pointed rocks like a row of knives or murderous fangs.  Rebecca so haunts the entire grounds, her initial is seemingly writ in the sky by a murmuration of birds.  Then there is Scott Thomas’s Danvers, suggesting the sexual nature of her allegiance to her former mistress more than ever as she insists James caress a sheer black nightie, telling her Rebecca didn’t have a ladies maid as ‘I don’t want anyone but you, Danny.’  As Wheatley’s film switches tone, so does the uniquely emotive score by Clint Mansell ("Black Swan," "High-Rise"), one of the year’s best.      Yet for all its pluses, I also found Wheatley’s modern interpretation troubling, his heroine’s last act support of her husband morally dubious here, the Manderley Maxim (vs. the Monte Carlo) more perplexing.  And why did James make me think of Nancy Drew once too often?

Wheatley’s take on the classic tale is a worthy one, yet for all it has to recommend it, most notably costume, score and Scott Thomas, it never fully enraptures, niggling issues pulling us outside the world he’s created.  Hitchcock’s is still the gold standard, but this “Rebecca” brings an intriguing modern perspective from which to consider it anew.  The titular, unseen character, whose very name leaves her successor’s unspoken and who an admiring Danvers describes as having controlled ‘a brute of a horse’ leaving it ‘frothing and bloody’ has never seemed more sadistically sexual and defiantly her own woman.