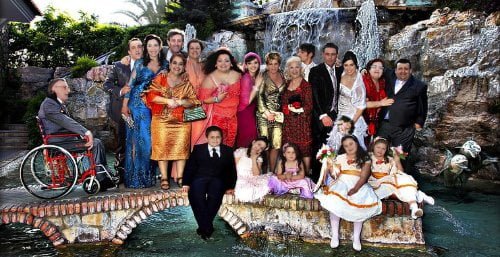 Luciano (Aniello Arena) is a fishmonger happily plying his trade in Naples. He has a gift for entertaining his clients and, when the popular reality television show “Big Brother” comes to town for auditions, Luciano is pushed by his family to try out. He resists, at first, but finally agrees when he is encouraged by Enzo (Raffaele Ferrante), the show’s longest lasting contestant, to not give up hope, sparking Luciano’s obsession with “Reality.”

When he attends a family wedding at the fantastical La Sonrisa hotel, Luciano (Aniello Arena) takes the opportunity to interact with special attraction Enzo (Raffaele Ferrante), who shot to nationwide fame as a Big Brother contestant. Luciano's blue-wigged drag queen steals the spotlight and at the urging of his kids, he tries out for the show himself. But as he waits for the call he is sure will come, Luciano increasingly loses his grip on "Reality." Cowriter (with "Gomorrah's" Ugo Chiti & Maurizio Braucci & Massimo Gaudioso)/director Matteo Garrone's followup to his award winning organized crime film may have won the Grand Jury prize at Cannes, but it didn't receive the attention his previous film did. That's a shame, as "Reality" works on multiple levels and Arena, who worked within a prison release arrangement while serving a life sentence, creates an indelible, sad character. Garrone begins with an incredible overhead tracking shot that follows a golden, horse drawn carriage to the gates of a castle - it's fairy tale wedding, the bride and groom creating an illusion for their special day. The setting and assembled guests, arrayed in bright primary colors, resemble something like a Fellini movie set in Las Vegas. But when Luciano and his wife Maria (Loredana Simioli, "Passione") return to their Naples neighborhood where he runs a fish stall, things are decidely different, their tenement all dusty browns and golds like the delapidated backstage of an old theater, the metaphor enhanced as Maria removes his makeup. At a local shopping mall, Luciano arrives at the last minute for his Big Brother audition, using his brush with Enzo to secure it. Enzo, who spouts the same encouraging slogans at every appearance ('Keep believing! Never Give Up!'), gives the impressionable Luciano the idea that he's a shoo-in. At first, Luciano's confidence makes him a local celebrity, the neighborhood bartender (Ciro Petrone, "Gomorrah," "Love Is All You Need") even starting a fan club. Against Maria's wishes, Luciano sells his livelihood (casting his oldest friend Michele (Nando Paone) out into the street in the process), so sure is he that he will become rich and famous. But as the days wear on without a call, Luciano descends into madness, believing everyone who looks his way is a spy from the show checking up on him. He begins a series of charitable acts which he can ill afford, all to make a good impression. And with this, Garrone presents the parallel illusion of the Catholic Church in all its pomp and ritual. Michele convinces his friend to seek God, but he's looking for redemption at Roman studio Cinecitta. This is made most evident when he cross talks with two old women at a mausoleum who believe he's talking about the House of God when instead he's currying their good graces as reality TV show reps. At a nightclub, he screams with the 'faithful,' as Enzo appears swinging over their heads amidst showers of confetti ("Gomorrah" cinematographer Marco Onorato's work is outstanding). Meanwhile Maria seeks advice from her female in-laws, always arranged in the same tableau in a long, narrow kitchen. They spout the same type of platitudes we've heard from Enzo. Arena, who bears a striking resemblance to the more refined looking Ferrante, has the uncanny ability to beam a fervent light from his eyes, one that conveys both passionate faith and madness. He carries the film, but Garrone's cast his support cannily. Standouts include Simioli, Paone, Nello Iorio as Luciano's rotund, teasing brother Massimone and Giuseppina Cervizzi's ("Gomorrah") fat and happy niece Giusy. "Reality" makes a powerful statement about how so many, seduced by the celebrity age we live in, are no longer content with the simpler lives lived for generations. Although it would seem to have little in common with the gritty "Gomorrah," both films show an ease with telling a story while moving about a large ensemble, both films depicting systems which eat their own. With his last shot, a zooming out from overhead bookending the first, Garrone places Luciano in his dream world, suggesting that perhaps he's found that other 'House' after all.

Luciano is an unwilling contestant who tries out for the Big Brother reality show. His wife, Maria (Loredana Simioli), young daughters and his extended family all encourage him to reach for the dream of wealth and fame. When he is called to the famous Cinicetti studios in Rome for another show audition, he and his family gets the VIP treatment and he is assured that he is a shoe in when Enzo tells him to “keep believing.” This begins a downward spiral of obsession that will shake Luciano and his family to pieces. “Reality” starts out on a mirthful note with Luciano always the entertainer at his market and repeatedly told by his friends and family how great he is. Couple this local praise with the chance to be a television icon and you can see the wheels turning in Luciano’s head as he plots out his “new” life. An incident, though, will thrust Luciano into the abyss of paranoia. A homeless man begs the fish monger for some food but is angrily shoved away. Then, Luciano begins to think he is being watched by spies for Big Brother. Suddenly, he suspects that EVERYBODY is a spy and he withdraws dangerously into himself. Star Aniello Arena has a quite different background from your normal actor. In 1991 he was convicted of three Comorra-ordered murders and sentenced to life imprisonment without chance of parole. In prison, he embraced acting and, eventually, director Matteo Garrone was able to get the Italian prison system to furlough the criminal-turned-actor to star in “Reality.” Arena’s performance makes this bureaucratic decision a good one, indeed. Most of the other actors are a chorus surrounding Luciano, but Lorena Simioli, as Maria, gives a strong, convincing performance as a wife who is helpless in stopping her husbands downward fall. In the end, “Reality” is a quite sad story about our obsession for the glamour and fame of reality and how this obsession leads to the ruin of a man.