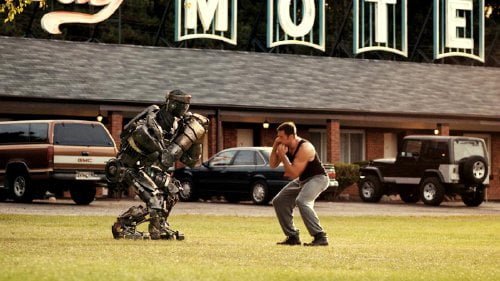 Charlie Kenton (Hugh Jackman) is a washed up ex-boxer who was forced to give up the fight game when robots replaced people in the ring. He has barely eked out a living as a low-end fight promoter and is deep in debt because of his gambling. Then, two things happen: he has to take his estranged son, Max (Dakota Goyo), for the summer and Max finds an old fight ‘bot named Atom. They bring the ‘bot to life and Max plans to enter him in the ring of “Real Steel.”

Charlie Kenton (Hugh Jackman) was a boxer when the sport transitioned from humans in the ring to robots. Owing tens of thousands of dollars because of his brash business tactics, Charlie keeps losing his mechanical contenders along with any emotional connections to the human race. Then he discovers the son he abandoned eleven years earlier has lost his mom and that her sister wants custody. Charlie strikes a secret deal with Debra's (Hope Davis, "The Secret Lives of Dentists") wealthy husband Marvin (James Rebhorn, "The Box") that will get each of them what they want - $100K and the summer free to travel - but gets more than he bargained for when Max (Dakota Goyo, "Thor") insists on joining him on the underground boxing circuit in "Real Steel." There is nothing about "Real Steel" that sounds like it should work in any way. Screenwriter John Gatins ("Coach Carter") has very loosely adapted Richard Matheson's short story 'Steel,' which was previously made into a Twilight Zone episode, but he owes just as much to Sylvester Stallone, and Shawn Levy ("Night at the Museum," "Date Night") has been to directors what a paint-by-the-numbers hobbyist is to an artist. The oddly assembled cast, with the exception of Evangeline Lilly (TV's 'Lost'), largely overacts. Heck, even the extras sometimes call attention to themselves. And yet, there's no denying the film's ability to entertain. It's probably the best cliched father-connects-with-the-son-he-never-knew with boxing robots movie you're likely to see. The kid is so adorable, the filmmakers allow Jackman to make a self-aware comment about it. The script tries to have it both ways more than once (Charlie doesn't control his robots well until he takes over for the very boy who's criticized him and by the same token Max makes no bones that he doesn't agree with dad's choices then asks for his help). The impossible happens off screen (Max is somehow able to dig a 1,000 lb. robot out of a landfill and cart it a considerable distance to dad's truck by himself). The climactic battle between Max's old model 'bot and the state-of-the-art champion hinges on heart rather than anything resembling logic, something Gatins at least provides for Atom's early bouts. Charlie's past is based on not just one, but two seemingly once-in-a-lifetime romances whose intersect is never explained. But "Real Steel's" robots are well executed, from beat up old bruisers to slick super 'bots with unique features. They seem more real than those CGI transformers. Atom, Max's found old sparring robot, has a 'shadow' feature which means we get a lot of Max and Atom cocking heads at each other like puppies, but wisely, the old robot isn't cutesied up too much, concessions to human features a subtle marring of a mesh mask that gives it a vague nose and mouth. Lilly's Bailey Tallet is a nice link to Charlie's past and the actress makes her a solid foothold for the future as well. Jackman comes close to mugging, especially in early goings, but has the moves down and a core chemistry with Goyo. There are no surprises in "Real Steel" and it runs long at 126 minutes, but it's the kind of movie parents shouldn't mind taking their kids to. It's less of an eye-roller than this year's "Warrior," and, like the "Rocky" series it so relies on, a second chapter is already in preproduction.

Long time comedy director Shawn Levy (“Date Night,” “Big Fat Liar,” “Night(s) at the Museum”) takes on sci-fi and boxing with his robotic homage to “Rocky.” Overlong (2+ hours) but eminently entertaining, “Real Steel” combines boxing ring action, huge robots kicking the lubricants out of each other and an estranged father son bonding story. Sure, it is full of cliché and the big finale is a direct copy of the championship fight in “Rocky” so there are few surprises. But, the battling ‘bots provide the eye candy and a decent father-son story provides the melodrama. Big plot holes, like why would Charlie sell his son then take him for the summer, just do not make sense. You have to suspend disbelief and simply hop over the holes and let “Real Steel” do what the filmmakers intend – entertain. Hugh Jackman’s everyman Charlie is conniving and always trying to make the fast buck and usually loses. He sees his son, Max, as a meal ticket but the strong-willed youngster will not let his father get away with anything, no matter how hard Charlie tries. The film really begins to roll when, following a harrowing rescue in the rain; Max finds an old, obsolete robot, an early G2 model, which was designed to withstand the brutal punishment as a sparring partner for the bigger, stronger championship boxing ‘bots. Miraculously, and with the help of Charlie’s friend and landlord, Bailey (Evangeline Lily), who is also a mechanical wiz, Max restores Atom to fighting fettle and, despite Charlie’s discouragement, brings his ‘bot into the robot boxing game. When the world champ mechanical pugilist, Zeus, comes into the film you know there is a David versus Goliath battle in the making. Acting is not the reason anyone is interested in seeing “Real Steel,” though Jackman is likable as Charlie, a has-been pro boxer trying to make a comeback through his surrogate robots. Dakota Goyo gives Max a complexity and maturity (sometimes Max acts the father to Charlie’s son) in what could have been a cloying, precocious performance. Evangeline Lily makes Bailey a strong, smart and kind woman who you want to be with Charlie in the end and is as likable as Jackman. Other performances, including Hope Davis as Max’s Aunt Debra (who wants to be his mother) an James Rebhorn as her wealthy husband Marvin, are shallow and there just to help move the story forward. The reason we ARE here to see “Real Steel” is the rockin’ robots. The deft use of CGI, motion capture and animatronics makes the action look real and believable (in a bombastic Hollywood way). The ‘bot bouts are exciting, even the grand finale that shamelessly copies “Rocky,” but I take this as a nod to the classic fight film.