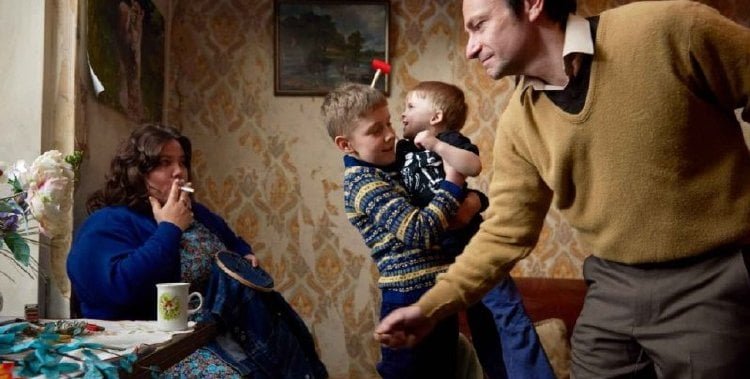 Writer/director Richard Billingham grew up in a Black Country council flat on the outskirts of Birmingham in Thatcher's England. Now an award winning photographer, Billingham broke through with his photography series 'Ray’s a Laugh,' his subjects the perpetually smoking alcoholic father and overweight, heavily tattooed mother that raised him there. He makes his feature film debut with the neo kitchen sink memory piece "Ray & Liz."

"Ray & Liz," which slides into and out of three extended memories in three different time periods with a pan of the camera, marries personal experience with artistry so masterfully, it is mesmerizing. This pitch black look at poverty is not an indictment of its subjects, instead a mix of moments large and small which illustrate how brutal economic conditions render one helpless.

The film opens in the small cramped room where Ray (Patrick Romer), now older and estranged from Liz, exists for nothing more than Sid's (Richard Ashton) next delivery of home brew in three used plastic bottles. This extreme portrait of alcohol addiction is made alternately more horrifying with frequent close ups of the flies which gather in Ray's room and strangely beautiful by the play of light and shadow on the nicotine stained curtain hanging on the small awning window that is Ray's only portal to the outside world.

Billingham uses elegant transitions, a camera panning up a wall to pan down into another time, another place. We meet Liz (Ella Smith) in a tableau composed like a Dutch master's portrait of a noblewoman, seated by a window with an embroidery hoop, flowers abundant in a vase like a lush still life. As Liz commands a small brown dog back to its basket, a wider look reveals Richard's young brother Jason (Callum Slater), the two year-old happily playing on the floor. There is a parakeet in a cage and two hamsters. Ray's brother Lol (Tony Way), large and mentally challenged (but the only one who seems to notice the wallpaper is peeling off the walls), arrives promised a pork dinner but surprised that he'll be baby-sitting, Liz and Ray needing to take Richard to buy new shoes for school. Liz threatens Lol with a beringed fist, the parakeet's coos adding an underlying darkness to her words, a print of a tiger looming over her shoulder.

No sooner are they gone than a menacing Will (Sam Gittins) arrives to play Lol. The room's entire dynamic changes, those flowers revealed to be an artificial arrangement work-in-progress, several completed ones arranged around the television like cheap funeral baskets. What follows is a tragicomedy that ensures Liz will honor her threats with the maternal instincts of a brutal bar room brawler.

After a brief interlude with the older Ray, the filmmaker flashes back to a more recent memory, Jason now 10 (Joshua Millard-Lloyd). The dog, now older and bigger, barks from the end of the bed where Ray (Justin Salinger) and Liz are passed out. It needs to be taken out, but no one pays any attention. Observing Jason poking a bobby pin around his father's gaping mouth, Richard (Sam Plant) gestures, the two heaping a spoon with chili powder in the kitchen where a goldfish can barely be seen swimming in a cloudy tank. Their deed done, the two take off, Ray sputtering awake in a cloud of red powder to pick up the urine soaked paper at the front door. The next morning, the one in which Ray and Liz haven't even noticed Jason is absent from, will have a shattering effect upon the family. (It is notable that the transition into this scene involves the rewinding of fireworks outside Ray's window, presumably for Guy Fawkes Day.)

The overall effect of "Ray & Liz" is something like early Terence Davies Gothic, the nostalgia of his post-war reminisces of working class Liverpool replaced with the cold harshness of Thatcher's England, yet just as eerily beautiful. Cinematographer Daniel Landin ("Under the Skin") polishes Billingham's inspirational images with a painterly eye, his nighttime exterior's eeriness complemented by a sound design featuring chilling winds and the sound of a rolling bottle. Billingham's family doesn't have sing-a-longs, scenes instead complemented with Siouxsie and the Banshees' 'Happy House' or Fine Young Cannibals' 'Good Thing' as ironic sonic time machines. While Liz passes the time away, Ray's drinking increases, their poverty symbolized by the jar of cigarette stubs Ray's collected, 'with still an inch of white on them.'

Animals are everywhere. While Liz is represented by tigers or a fox, Jason's love of nature is indulged with many pets, a trip to the zoo highlighting hyena pups and a pair of giraffes. (Later when Jason experiences the warmth of a friend's mother (Michelle Bonnard), these comforting creatures are emblazoned on her shower curtain.)

Billingham shows a real affinity for tone here, prankish comedy lightening boredom and misery. "Ray & Liz" may not be the portrait most parents would wish for, but their son's film isn't judgmental. There is forgiveness and understanding here.