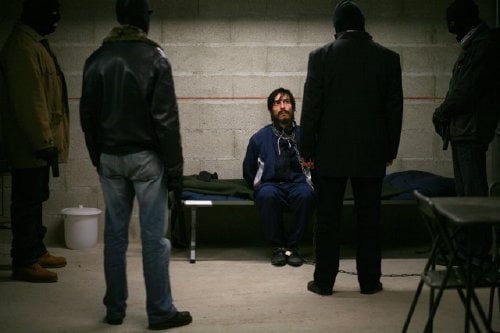 Stanislas Graff (Yvan Attal, "My Wife Is an Actress") leads a heady life. He's a powerful industrialist who meets with world leaders. He also keeps a mistress in a glossy Parisian apartment. After breakfast with his wife Françoise (Anne Consigny, "A Christmas Tale") and teenaged daughters, Stan is kidnapped on his way to the office and his plight holds him, his family and his business "Rapt."

Belgian writer/director Lucas Belvaux proved he doesn't offer the usual viewpoint with his 2002 "The Trilogy." His latest isn't the thriller/policier one might expect, but instead is a tantalizing look at his own kind of 'man who wasn't there.' Stan may move in elevated circles, but when he's snatched from his everyday life, those who interact with him every day find that they didn't really know him at all. Business and personal relationships shift and slide and when Stan finally comes home, a shell of his former self, the old adage about dog being man's best friend is proven once again. At first, Belvaux fools us into thinking we're watching a genre film. The pace and cutting are quick and the initial focus is on Stan's horrific circumstance - forced to wear a hood and gag and sleep in a little tent, he's screamed at and threatened when discovered in the morning without his hood. If he sees his kidnappers, it'll be over. We've already witnessed the removal of two joints of his middle finger, delivered as proof of his captivity, and he's forced to dip the wound in antiseptic when his daily bread and water are delivered. André Peyrac (André Marcon, "The Page Turner") has assumed temporary control of the business and meets with its board to suggest that, seeing as how Graff's personal accounts are inaccessible in his absence, they front the ransom demand. The group agrees, but only to the tune of 20 million Euros. 50 has been requested. Meanwhile Françoise, who seems to be willing to do anything to assure her husband's safety, must face his mother, Marjorie (Françoise Fabian, "My Night at Maud's," "5x2"), who assumes a practical stance on the family fortune. Tension builds when the press steps in and begin to uncover Graff's gambling habit - reportedly losing as much as 1.5 million in this 'time of austerity' - and the women he's kept company with. Le commissaire Paoli (Michel Voïta, "Indochine") takes Françoise to the elegant abode we'd seen in the film's early minutes to ask if she finds anything out of place, then intuits that this is the first time she's been there or even known of the apartment's existence. Graff's lawyer Maître Walser (Alex Descas, "35 Shots of Rum," "The Limits of Control") represents the family in meetings with Peyrac and Jean-Jacques Garnier (Christophe Kourotchkine, "Taken," "Paris 36") is dubbed with a code name to deliver the ransom, but it is rejected as a 'negotiation' when the kidnappers learn the amount is not what they asked for. Walser makes a payment attempt in a dramatic scene on a beach, but the presence of the police is noted. As the kidnappers specified police would mean death, Graff is taunted with the idea that one of his insiders wants him out of the way. All these shifting loyalties are what make "Rapt" so compelling. Françoise discovers that the board monies would only be a loan and that her family is far less wealthy than she thought. The Graff girls Véronique (Sarah Messens) and Martine (Julie Kaye) are devastated to learn of their father's affairs. Stan is transferred and given over to Le Marseillais (Gérard Meylan, "Marius and Jeannette"), who plays good cop to the prior captor's bad, until conversation about hunting and women and weapons gets sinister. Graff is reminded that he's no longer front page news and after yet another money transfer is botched, told that he'll either be 'plugged' or freed. The kidnappers' ultimate decision is a whopper, but Stan has a series of shocks ahead. Belvaux's film is cooly elegant, beautifully shot by "The Trilogy's" Pierre Milon and edited by Danielle Anezin. The film is based on the 70's case of Baron Edouard Empain but while the director retained many of the facts of the kidnapping, he chose to keep the story in modern times for budgetary purposes. Considering his highly personal approach, it was a wise one. Belvaux's use of code names for dealing with the kidnappers adds another element to his themes of identity. Yvan Attal, himself a director, gives a fantastic performance, mostly physical (he lost 43 pounds to make the film), with an arc that takes him from a 'Master of the Universe' to a shrunken, hirsute man given little sympathy after his ordeal. The intersect of family and business and the often internecine dealings which bubble forth in some ways recall the terrific Danish film, "The Inheritance." "Rapt" is a work of dexterous, subtle intelligence. Don't expect an action film and its psychological character portraits - both individual and group - will envelope you.