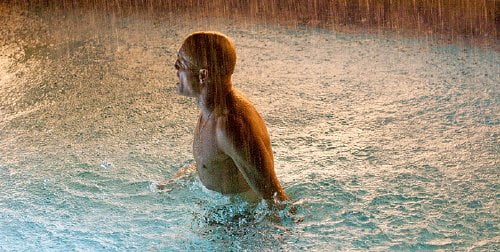 Corrupt LA cop Dave Brown (Woody Harrelson) has been under the scrutiny of department’s Internal Affairs for some time. But, this scrutiny is going to intensify when he is caught on video brutally beating a black man following a traffic accident in “Rampart.”

David Douglas Brown (Woody Harrelson) is an L.A. cop with a scandalous past who lives next door to his two ex-wives, sisters Barbara ('Sex and the City's' Cynthia Nixon) and Catherine (Anne Heche, "Cedar Rapids"), and his two daughters by them, Helen (Brie Larson, SHOtime's 'United States of Tara') and Margaret (Sammy Boyarsky). After being caught on videotape beating Black motorist Shondell Parmallee (stuntman Keith Woulard), Brown counters questioning from Asst. DA Joan Confrey (Sigourney Weaver) with entitled, erudite repartee. But Brown's illegal methods are a thing of the past and he's bringing unwanted focus back to his division, "Rampart." This sophomore feature from cowriter (with James Ellroy, "L.A. Confidential")/director Oren Moverman ("The Messenger") is a highly stylized character study of a macho cop who fails to recognize the evolutionary momentum of the LAPD. Moverman's cowriter Ellroy has whipped up delicious dialogue that requires a real balancing act to pull off convincingly and Harrelson is more than up to the task. It's a great performance that has been undervalued during awards season and the film is better than its glossier counterpart, "Training Day." The film begins with Bobby Bukowski's scorched earth cinematography finding Brown with a colleague and his female rookie cop partner (Stella Schnabel) outside a takeout place in L.A.'s blazing sunlight. Dave's mood is jovial, but his banter reveals that he believes Jane is a symptom of the decline of the force. He also demands she finish food she does not want (Brown drinks plenty of alcohol and smokes, especially where it's prohibited, but we never see him eat, not even at his exes dinner table). We feel sorry for the guy who broadsides Dave's police car, but then he assaults Dave before running, a touch of grey that doesn't appear on the six o'clock news. Moverman's going for a build and build he does as David picks up women in his local bar before returning to the bed of one accepting ex or the other. His eldest daughter is in a rebellious phase, calling him by his cop moniker 'Date Rape' (based on suspicions that he killed a rapist rather than following the law), his youngest still idolizes daddy. Dave gets involved with Linda Fentress (Robin Wright), a woman he pegs as a lawyer, and consults with an old buddy of his dad, Hartshorn (Ned Beatty), who dispenses old school advice and just may be a figment of his imagination (watch the camera angles whenever Hartshorn's around). 'Hemorrhaging money' because of his legal woes, Brown gets a bead on a robbery and inserts himself into the getaway as an on duty cop, but its the money he's after and it costs him another murder and a staged crime scene which he realizes too late has been witnessed by the wheelchair-bound homeless General Terry (Ben Foster, Harrelson's "The Messenger" costar, quite good here). Much like "Shame," Dave's descent continues with a visit to an S&M club before a still montage with teeth shattering sound segues to a last, desperate bid, an attempt to trade past, more heroically viewed transgressions to whitewash his current ugly circumstance. Harrelson's complex cop is the perfect embodiment of an actor bringing a writer's words to life and Moverman's taken Ellroy's script and produced a portrait of corruption so intense that its seductive vessel can not only no longer recognize his own evil, but is utterly confused by its results. It's no wonder, because as Harrelson, whose hard physical menace recalls early Michael Rooker here, simply purrs manipulative logic into a cloud of seeming infallibility. That Ellroy and Moverman surround this macho ideal with women is a brilliant touch, a bit of subconscious circling of the wagons. Harrelson's extensive supporting cast also includes Ice Cube as a down to earth D.A. investigator, Robert Wisdom ("The Collector") summing up a whole lot in short screen time as his Captain and Steve Buscemi (HBO's 'Boardwalk Empire'), whose presence overpowers his one scene. Audra McDonald (TV's 'Private Practice') is the sexy cop groupie Dave picks up the night before he makes the news. The film has a terrific look of hard-edged shadow and light, the latter of which goes to red more and more frequently.

Woody Harrelson hits one out of the park with his tour de force performance as a corrupt and cynical cop who also happens to be a family man with two ex-wives, sisters Barbara (Cynthia Nixon) and Catherine (Anne Heche), and a daughter by each, Helen (Brie Larson) and Margaret (Sammy Boyarsky). Dave is also a sex addict who does not eat food, a racist, a bigot and a powder keg that could explode any minute. With the exception of the Independent Spirit Awards and the Satellite Awards, Harrelson has been overlooked by all other awards organizations, including the Academy and this is a shame. Harrelson dominates the film but his supporting cast does a good job in fleshing out their small roles. Name actors and unknowns populate the story with the likes of Robin Wright, Ned Beatty (is he Dave’s mentor, ghost or hallucination?), Sigourney Weaver, Ben Foster and Ice Cube showing up in small roles that help move the story forward smoothly. “Rampart” reteams Harrelson with his director from “The Messenger,” Oren Moverman, and others from that film, including cinematographer Bobby Bukowski. The look of the film, using saturation to wash out colors, is retro 1990’s, which suits a film set in the era of Rodney King.